Wendy filed for divorce from her cheating husband Kevin Hunter in April. Since then, she has been seen alone or in the company of her son and bodyguards.

All of that changed last week when Wendy was spotted with a man young enough to be her son. Rumors swirled that Wendy was romancing the young man, but she denied the rumors, saying he was just a friend.

Splash News caught up with Wendy and Marc on June 10 as they stopped for a bite to eat at Roscoe's Chicken and Waffles in Los Angeles.

As Splash News interviewed Wendy, she broke down and cried under the stress of her ongoing divorce drama.

Then on June 11, TMZ bumped into the odd couple in New York City, as they stopped to withdraw cash from an ATM machine.

She laughed out loud when TMZ asked if BBQ potato chips and orange soda was the way to her heart. Marc played his role perfectly: tall, dark and silent - the way cougars like their men at this late stage in the game. 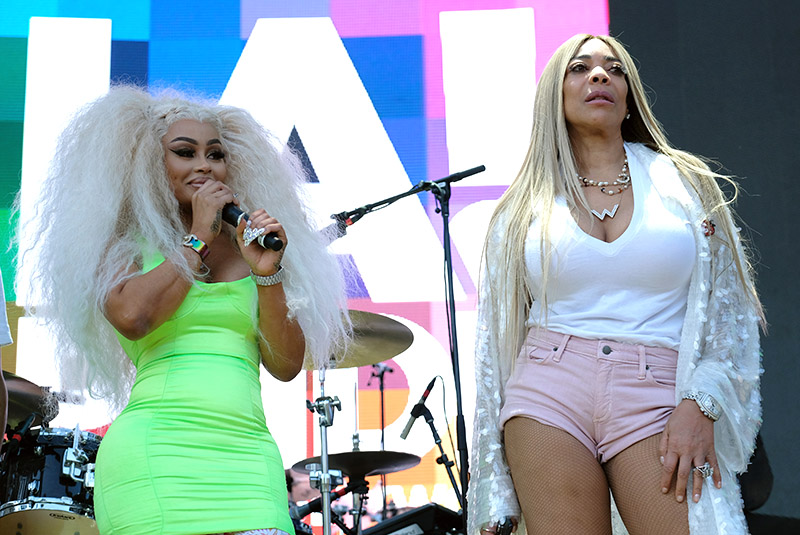 Chyna has been accused of accepting $68,000 cash from unknown, wannabe rappers to "date" them for a few months. Social media users wonder if Wendy took a page from Chyna's book by paying Marc to play his role for media and blog coverage. There doesn't seem to be any chemistry between them.

Marc is described as a fashion designer but no one can find anything he's designed.

Heavy.com reports Marc "was convicted of conspiracy to commit robbery using a dangerous weapon as well as breaking and entering in 2013, and served over a year in prison before he was released in 2014."

But Wendy appears to be smitten by Marc. She posted an Instagram photo of herself lounging by the pool with her man.

"Last night was the most beautiful sunset in Sherman Oaks with special people. Thank you, California! You've won me over! I'll be back for the Hip Hop Festival in August!" she wrote in the caption.

Her followers were genuinely happy for her, despite the eyebrow raising age differences.

"Well Wendy always said “the best way to get over someone is to get under someone else!” Life is short and you only get one shot at it. Do you and enjoy," one user wrote.