Travis Scott has offered to cover the funeral expenses for fans who died at his Astroworld Festival.

TMZ reports Scott will fully cover any and all funeral costs for the 8 people who passed away at the concert this weekend.

The families haven't said if they will accept his offer. A few families created GoFundMe accounts to raise funeral expenses.

According to TMZ, Scott will partner with BetterHelp -- a network of mental health professionals -- to offer mental health services, for free.

Scott also announced he will refund all tickets to Astroworld.

The troubled rapper is desperate to repair his public image amid reports that he has a history of encouraging his fans to harm themselves. 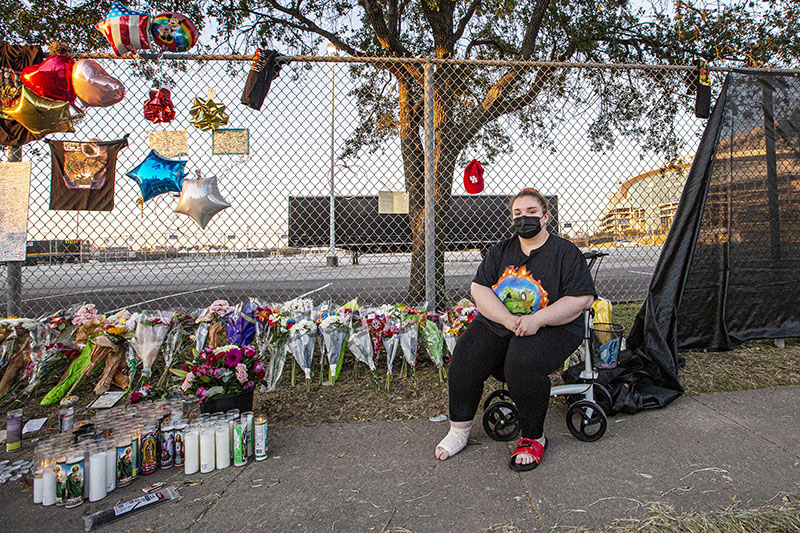 Bryanna Morales, 17, poses at a makeshift memorial on the NRG Park grounds near where 8 people died. Morales was among hundreds injured during a crowd surge on Friday night.

Morales says she was knocked down twice and injured her foot during the concert. She says "the medical staff was not properly trained. I was taken into the medical tent because I was having a hard time breathing and all they did was hand me a bottle of water and told me to sit in the corner."

Johnson, 55, apparently suffered a heart attack in a store and died earlier this month.

His body lay in a morgue for weeks until the coroner used his dental records to identify him and contacted his family.

In a post on social media, Blackson said he received a call from Johnson's former management and his wife.

He said Johnson's wife -- who was separated from him for years -- was "in tears".

"Apparently no one has heard from AJ for about a couple of weeks," Blackson wrote.

"Get to find out he had a heart attack in some store on Sept. 6th and was taken to the hospital where he died a day later [shaking my head]. He had no identification on him and I'm shocked no one from the [Los Angeles] hospital recognized him to tell the world."

Blackson went on to say Johnson "left this world with absolutely nothing".

It's unclear how Blackson knew Johnson's financial status at the time of his death. He readily admitted that neither Johnson's former manager or wife had heard from him in years.

Then Blackson provided his Cash app ID, a mobile payment app, and asked his followers to send him money. He wrote: "at the end of the day I'll match it and send to his family to bury him. Thanks."

However, his followers accused Blackson of pulling a "scam" and they wondered why celebs who display material wealth on social media while asking fans to send them money.

"Do these celebrities realize that most black folks are BROKE due to the unemployment of the pandemic? How about they budget THEIR money, and go a week without a $400k watch and contribute their own damn money! Folks got their own bills and loved ones to care for and bury. Y'all niggas (in Hollywood) love bragging on social media about what y'all got, so put your money where your mouth is and give that good brother a NICE send-off!"

"MBlackstone was just on Cribs stunting. Just pay for the funeral already." 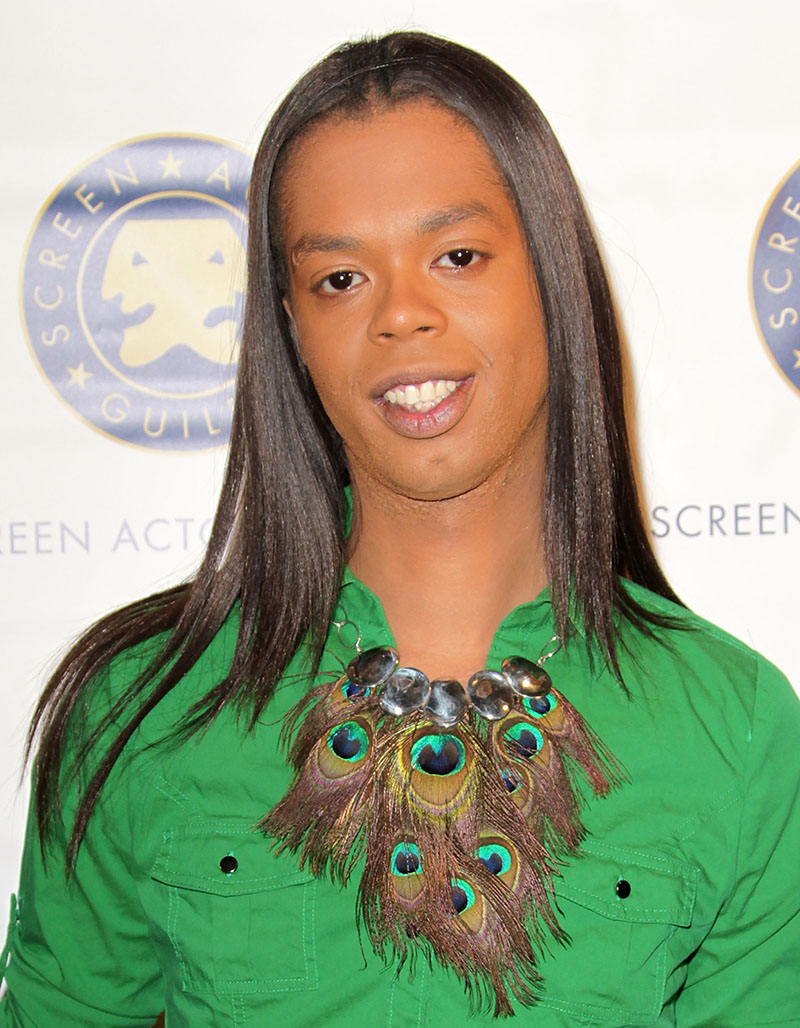 Antoine Dodson, best known for going viral in 2010 after he declared "Hide yo kids, hide yo wife" in a news interview -- is mourning the death of his mother.

Antoine tells TMZ that his mom, Jennifer, died Sunday at a hospital in Decatur, Alabama. Antoine said her death came as a shock because he thought she was doing better after recent health issues.

Antoine says his mom began having problems with her leg around the time he became Internet famous. Her leg was amputated a few months ago. An infection set in and she was transferred to the ICU, but Antoine says she was getting better, according to TMZ.

Sadly, Jennifer took a turn for the worse and Antoine got the call on Sept. 12 that his mom had passed. He tells TMZ doctors believe she died of heart failure.

Antoine, 35, is asking for donations to cover his mother's funeral expenses. He says because of the pandemic, he's strapped for cash and really needs help.

Antoine created a GoFundMe account to raise cash. As of Friday morning, over $6,000 was raised of his $9,000 goal.

He wrote in the summary:

"I'm not in a financial position to put my mom to rest and so I'm asking for your help, even if you can't I appreciate all the love and support coming, God bless us all!! Thank you."

Antoine renounced his homosexuality in 2013 and disappeared from the limelight.

Earlier, I reported that rapper Megan Thee Stallion (right) helped to cover the funeral costs for a fan who died unexpectedly.

Due to information on social media and in a GoFundMe page, Sandrarose.com incorrectly identified Shaniah Leigh Scales as a male-to-female transgender.

I apologize for the error.

"You reported that Shaniah Leigh Scales whose funeral was partially funded by Megan The Stallion was a Male to Female trans.This is absolutely incorrect. There is zero information you could have received to validate this.Shaniah was my niece. She was my sister's daughter. She was born a female and died a female. You need to retract your error and apologize to the family. Sent from my T-Mobile 4G LTE Device."

Megan Thee Stallion helped cover the funeral costs for a fan who died unexpectedly. The "WAP" rapper was made aware of her fan's untimely death on social media.

"Meg we lost a hottie ... our best friend passed away unexpectedly. They absolutely loved you, listening to ur songs was something we did every time we were together. We're helping their family w funeral costs. We started a gofundme & are halfway there. @theestallion."

"How much do y'all need?" Megan responded.

According to a GoFundMe page, Shaniah Leigh Scales passed away of unknown causes.

Over $16,000 was raised in 3 days. A friend of the deceased fan responded to critics who claimed the campaign was a scam.

"Sad I have to even tweet this but I've been receiving a lot of messages that apparently we are scamming people. I wish my best friend's death was not real but this is 100% true. We don't need to involve anyone to try and get money for no reason. Shaniah's service will be this Sat."

Sad I have to even tweet this but I’ve been receiving a lot of messages that apparently we are scamming people. I wish my best friend’s death was not real but this is 100% true. We don’t need to involve anyone to try and get money for no reason. Shaniah’s service will be this Sat

How much do y’all need? https://t.co/A4tTJRTrMv

If everyone can help and tag @theestallion so she can possibly see this that would be amazing.

YOU GUYS I CANT BELIEVE THIS!! WE HIT THE GOAL??? @theestallion THANK YOU SO MUCH FOR HELPING THEIR FAMILY! THANK YOU SO MUCH EVERYONE! EVERY SINGLE ONE OF YOU!! FROM THE BOTTOM OF OUR HEARTS!!! I AM CRYING SO FULL OF EMOTIONS???? 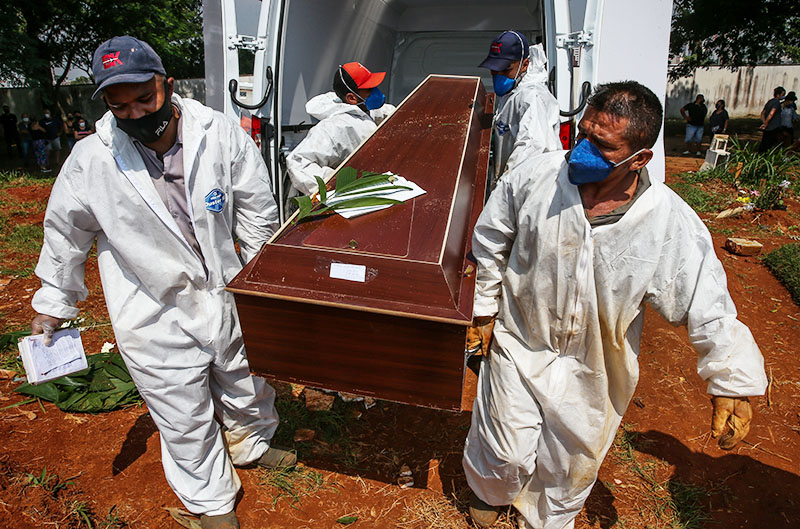 Help is on the way for Americans who struggle to pay funeral expenses for loved ones who died of Covid-19.

The Federal Emergency Management Agency (FEMA) has announced a program that will reimburse funeral expenses up to $7,000 for families of loved ones who died of Covid-19.

Recipients must be U.S. citizens or legal residents and provide funeral receipts for a loved one who died from Covid-19 after January 2020.

The $2 billion program is set to begin in April 2021 and will be funded through the $1.9 trillion federal coronavirus relief legislation enacted in March.

FEMA will being accepting applications in April. Reimbursement will be provided via check or direct deposit.

Anyone who received funeral insurance benefits will not be reimbursed under the program.

Chicago Bulls superstar guard Derrick Rose will foot the bill for 6-month-old Jonylah Watkins' funeral, ABC News reports. Jonylah died a day after she was shot 5 times while her father changed her diaper in the front seat of a van parked on Chicago's south side on Monday.

Police say the father, who had known gang affiliations, told them the killer opened fire on him while he changed the baby's diaper. Police believe the drive-by may have been provoked by a Facebook post.

END_OF_DOCUMENT_TOKEN_TO_BE_REPLACED

Before we get into this "Put 'em on Blast" post, I want to send my condolences to the family of Darrell "Big D" Davis, (pictured above) who is better known as rapper Bow Wow's longtime bodyguard. He passed away last week due to complications from an undisclosed medical issue.

Funeral services were held for Mr. Davis on Friday, March 11 in Stockbridge, GA.

If you are a Bow Wow fan then you are familiar with Big D, who protected Bow Wow from day 1 up until a few years ago when the two men parted ways professionally.

Bow Wow was supposed to attend Big D's funeral but he never showed up. According to inside sources who asked to remain anonymous, Bow Wow, 24, real name Shad Moss, also promised to handle the full costs of the funeral to relieve the hardship on the family.

That promise went from taking care of the full costs to paying half of the costs to paying nothing at all, leaving the family scrambling to come up with the funds to pay the entire bill.

I would love to give credit to the REAL MEN in the industry who stepped up to pay the entire funeral bill for the Davis family, but they do not wish to be identified.

Let's just say that they are very close to Bow Wow. Under normal circumstances, these people would not betray Bow Wow's trust, but what's wrong is wrong. By the way, my inside source drops a scoop in their email to us. Remember where you read it first!

Hi Sandra,
Bodyguard/Security affectionately known as "Big D" passed away on March 3. He'd been battling health issues. His funeral was held today in Atlanta, Georgia. He was Bow Wow's bodyguard for over 8 years. One of the FEW people that was there for him since day one. What's sketchy is how Bow committed to paying for his funeral. Well... paying in full went to HALF and HALF went to him not even showing up at all! Now how in the world does he LIVE in Atlanta and not show up to the funeral!?!? Maybe he was too busy tearing down Babies R Us since he has a child on the way! (Oops! Did I spill that? (And YES, it is a FACT.) Bow Wow is going through all these changes to reinvent himself. He has a new home with Young Money and always talks about how he "helps them" and they help each other... well guess he forgot he agreed to HELP his long time friend. What a damn shame!!

In the video after the break, Bow Wow is Punked by Toure for a segment on BET that never aired. As he leaves the room, you can hear Bow Wow shout, "Big D, handle that!" Big D was always there for Bow Wow. Too bad he couldn't be there for Big D.