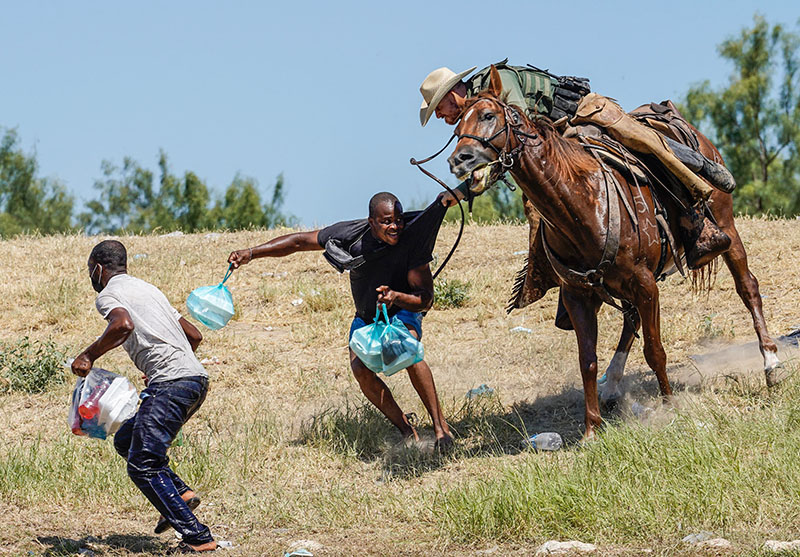 The photographer who took photos of Border Patrol agents on horseback chasing down Haitian migrants is speaking out.

The viral photos showed frightened Haitian people desperately clinging to bags of food and fleeing while agents on horseback chased them.

The optics of white federal agents herding Black men like cattle sparked outrage around the world. 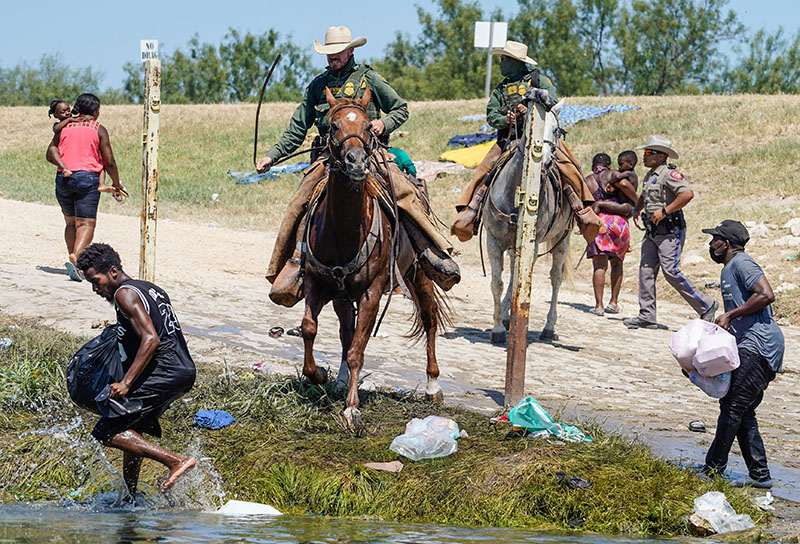 Speaking with KTSM, photographer Paul Ratje said he and his colleagues never saw agents whipping anyone.

"Some of the Haitian men started running, trying to go around the horses," said Ratje, who is based in Las Cruces. He said he took the pictures from the Mexico side of the border.

Ratje said a photo frozen in time can give the impression that the agent used his long reins to whip people.

"I've never seen them whip anyone. He was swinging [the reins], but it can be misconstrued when you're looking at the picture."

White House press secretary Jen Psaki called the images "horrific", and she said the agents in the photos have been suspended.

On Thursday, the White House issued a statement saying Border Patrol agents are no longer allowed to use horses to patrol the border.

END_OF_DOCUMENT_TOKEN_TO_BE_REPLACED

You know you've arrived when you're photographed by the great Annie Leibovitz. NBA star Tyson Chandler and his beautiful family are included in The Corcoran Group's Live As You Are campaign series. Leibowitz traveled from Manhattan to Palm Beach to capture tiny snapshots of family life in post-Obama America.

END_OF_DOCUMENT_TOKEN_TO_BE_REPLACED

The Getty Images photographer who snapped the selfie seen around the world says First Lady Michelle Obama was not upset with President Barack Obama.

Roberto Schmidt's infamous photo went viral on social networking websites on Tuesday. The photo shows Obama snapping a 'selfie' with himself and the Danish Prime Minister during Nelson Mandela's memorial service in Johannesburg.

Many critics slammed Obama for not maintaining decorum and dignity at such a solemn occasion.

But the photographer disputed the reports.

END_OF_DOCUMENT_TOKEN_TO_BE_REPLACED

The stylist responsible for dressing NBA star Kobe Bryant in those dreadful, borderline racist L.A. Times photo shoot images has reacted to the widespread criticism of the photos.

It's clear that the L.A. Times wanted exactly the type of response these pics elicited from the public or they wouldn't have gone to the trouble of Photoshopping Kobe's pictures beyond recognition.

The stylist, one James Valeri, gamely took the heat for the insulting, unflattering photos of Kobe. But in reality, these images are not the stylist's fault. Whoever Photoshopped the pics are to blame, not the stylist.

When a loyal reader emailed the pics to me, I initially thought it was a prank. Kobe can't be happy with the way these pictures turned out. I doubt he will sit for another photo shoot any time soon.

Here's what Valeri had to say about the concept and the wardrobe choices:

On the project's concept
The concept was about shooting everything in white. That was Ruven's idea [photographer Ruven Afanador]. But I wanted to do something more modern and less conventional and less cliched. ... It's a more modern silhouette. It's not like, 'Let's just put Kobe in a pair of pants and a shirt or in a suit.' The clothing is all layered.

On the negative reactions
The scarf picture and the hat picture were more to create an iconic image. When you do a portrait, you do think of the styling in how they're going to be different and how they're going to stand out. In 10 years time, or five years time, there has to be something particular or strange or different that will stand out. That image will stay in your mind. That's how it's going to become iconic. ... A lot of people aren't used to that, so when iconic pictures come out, they're disturbing, insulting, fascinating, it has a strong feeling attached to it, good or bad. Read more...