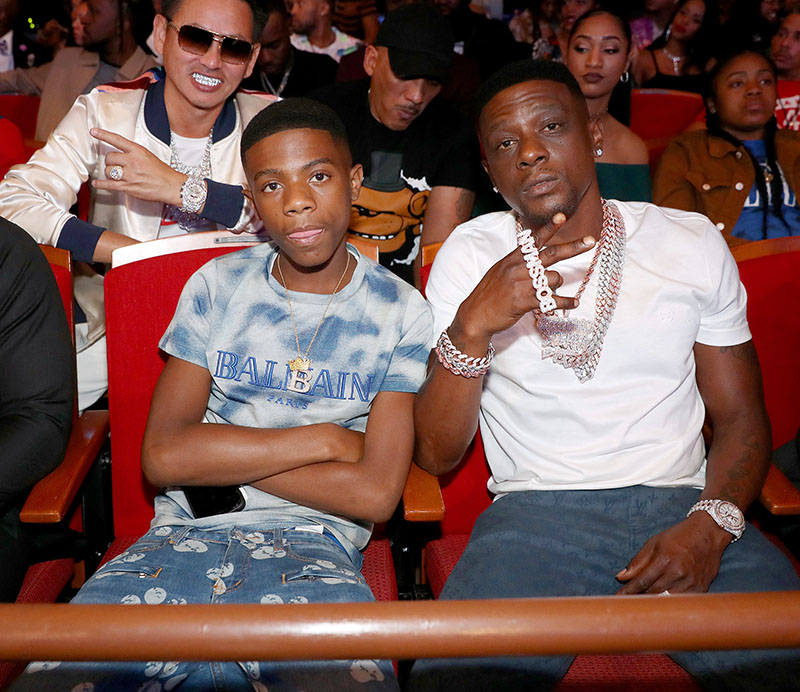 Rapper Boosie Badazz may soon find himself in family court again. A middle-aged white woman claims she gave birth to the rapper's 9th child - a girl.

Boosie, who was born Torrence Hatch, already has 8 children by multiple women. His eighth child was born in 2016.

According to multiple reports, the woman made the claims in a new Tiktok video that has since gone viral.

In the video, the woman shared a fan photo she took with Boosie last year. She captioned the image: "To the rapper i hooked up with last summer after the show."

In another image of her holding a mixed race baby girl, she wrote: "She has your eyes."

The woman reportedly decided Boosie was the father of her child after DNA tests ruled out other Black men she'd slept with.

She is reportedly seeking child support.

If the woman's claims are true, Boosie moves past rap mogul Dr. Dre on my list of prolific breeders. Dre reportedly fathered 7 or 8 children with multiple women.

"Where life has really begun. Love you already. #6months," she wrote. In a follow-up post, she added, "Feeling blessed."

Kyra is an executive for OWN Network where she produced the self-help TV series Iyanla: Fix My Life.

Epps, 50, already has 5 daughters by three women. He was previously married to Mechelle McCain, whom he divorced in September 2017.

The actor/comedian fathered three daughters with Mechelle -- Maddie, Mariah and Makayla, and two children with his current wife: Indiana Rose Epps, 1, and their unborn child.

His eldest daughter, Bria, 28, is from a previous relationship.

Rapper Moneybagg Yo is a doting daddy to his 8th child, a 2-year-old daughter named Spring Yo. The Memphis rapper spared no expense for his mini-me's elaborate birthday party.

A video posted on his Instagram account shows the 29-year-old Virgo and his 4th baby mama posing for a videographer while the song "Mama's Hand" by Queen Naija plays in the background.

Moneybagg is No. 12 on Sandrarose.com's list of prolific breeders.

He told radio hosts he fathered three of his 8 kids while still in high school.

Moneybagg and current girlfriend Ariane Fletcher are working on his 9th child. He surprised Ari with a fully loaded Lamborghini truck for her 25th birthday last July.

Ari shares a son named Yosohn with rapper G Herbo, who just welcomed a baby with his current girlfriend, Taina Williams, daughter of reality TV personality Emily B and stepdaughter to rapper Fabolous.