Long, 21, is charged with killing eight people - including six Asian women - during a shooting spree at three massage parlors in Atlanta and Cherokee County on Tuesday.

He was captured 3 1/2 hours later when a Georgia State Trooper performed a PIT maneuver on his Hyundai SUV and took him into custody in Crisp County, about 150 miles south of Atlanta.

Cherokee Sheriff's Captain Jay Baker held a press conference on Wednesday in Atlanta, where he stated it was too early to determine if Long's actions were motivated by race.

Baker angered many nationwide when he said Long had "a really bad day" on Tuesday.

Some reporters believed Baker sounded sympathetic toward the shooter. So they did a little digging into his background and uncovered a Facebook post that took a dig at China where many believe the coronavirus escaped from a lab in Wuhan.

The post shows images of t-shirts and a t-shirt shop. The black t-shirts are printed with biomedical hazard signs and the words "Covid-19 IMPORTED VIRUS FROM CHY-NA."

Capt. Baker captioned the post: "Love my shirt [username redacted]! Get yours while they last..."

Baker did not respond to Buzzfeed News's request for a comment.

Crimes against Asians have risen 160% in America since the coronavirus reached America's shores in February 2020. 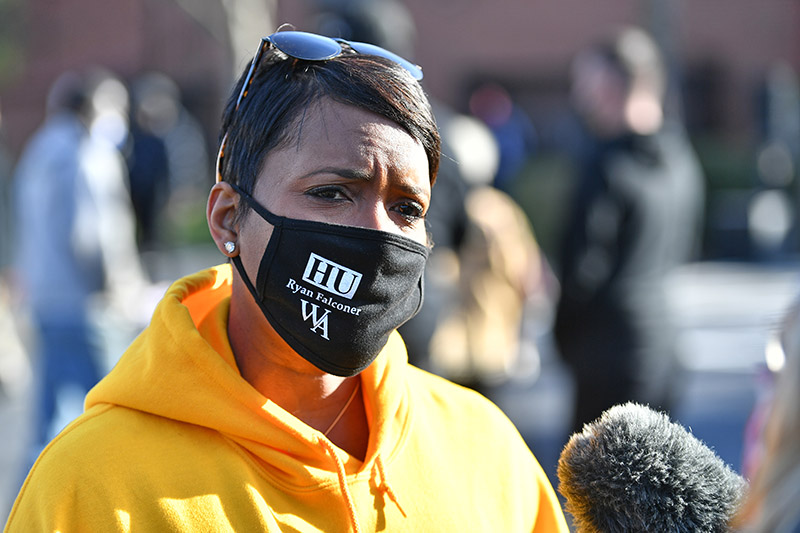 "A motive is still not clear, but a crime against any community is a crime against us all," she said in a statement obtained by the Atlanta Journal-Constitution. "I have remained in close contact with the White House and APD as they work with federal, state and local partners to investigate the suspect who is responsible for this senseless violence in our city."

She also thanked law enforcement for capturing the suspect swiftly.

He then drove 30 minutes to Atlanta, where he killed four people at two massage parlors on busy Piedmont Road near the intersection with Cheshire Bridge Road.

The deceased victims are six Asian women, a white woman and a white man. A Hispanic man survived and is being treated at a hospital.

Long was captured about 3 hours later in Crisp County, Georgia, when a Georgia State Trooper spotted his SUV and performed a PIT maneuver, causing his vehicle to spin out on I-75, about 150 miles south of Atlanta.

He was taken into custody without incident and charged with multiple counts of murder.

Two of the shootings occurred at massage parlors across the street from each other in northeast Atlanta, WSB TV reported.

A third shooting, that left four people dead, was at a massage parlor in Cherokee County, about 30 miles northwest of the city.

Atlanta police responded to a robbery call at the Gold Massage Spa on Piedmont Road around 5 p.m. in Atlanta. They found three people dead at the scene. All three were Asian women.

While there, police received another call of a shooting at Aroma Therapy Spa across the street, the Atlanta Journal-Constitution reported.

Officers found one person dead at that location, Atlanta Police Chief Rodney Bryant said. The victim was an Asian female, according to AJC.com.

About an hour later, deputies responded to 911 calls of shots fired at Young's Asian Massage near Acworth, Georgia, where five people were found with gunshot wounds.

The victims were two Asian women, a white woman and a white man, Baker said. The fifth victim, a Hispanic male, is being treated at a hospital.

Police initially said it was too early to connect all three shootings. A video image of a white male suspect was circulated in the news media.

A Georgia State Patrol officer spotted Long's SUV and performed a PIT maneuver as he traveled south on I-75, AJC.com reported.

Long, of Woodstock, was captured about 3 1/2 hours after the murders, the Cherokee County Sheriff's Office confirmed.

Officials in three jurisdictions are investigating the cases. Long is being held without bail in the Crisp County Detention Center.

A gunman shot and killed four people in a shooting spree that stretched from Chicago to Evanston, Ill., north of the city, on Sunday.

The shooting rampage began in Chicago's Hyde Park section, where Nightengale shot a 30-year-old man in the head, killing him. The gunman then drove a short distance, where he fatally shot a security guard after asking to use a phone at an apartment building in the Kenwood neighborhood.

In the same building, the gunman fired on a 77-year-old woman who was checking her mailbox. She is listed in critical condition at a hospital, Fox 32 reports.

Nightengale then took an elevator to the 19th floor of an apartment building, where he threatened a person and later stole their car. He drove to a convenience store, where he robbed it, killing a 20-year-old man and critically wounding an 81-year-old person in the process, Fox 32 reported.

After exchanging gunfire with police, Nightengale fled the area in the stolen vehicle. About 19 miles north, police received 911 calls reporting a gunman at a local pharmacy.

Nightengale fled from the pharmacy to a nearby IHOP restaurant, where he took a woman hostage and shot her. She is hospitalized in stable condition.

Officers eventually shot and killed Nightengale in the parking lot of a Dollar General store.

Nightengale's sister wrote on Facebook that he "hadn't been in his right mind for a long time," the Chicago Sun-Times reported.

"But for the brave conduct of Evanston police officers, many more people would have been injured," Chicago police Supt. David Brown told the Sun-Times.

In addition to the 5 deaths, dozens of people were wounded in shootings in Chicago over the weekend.