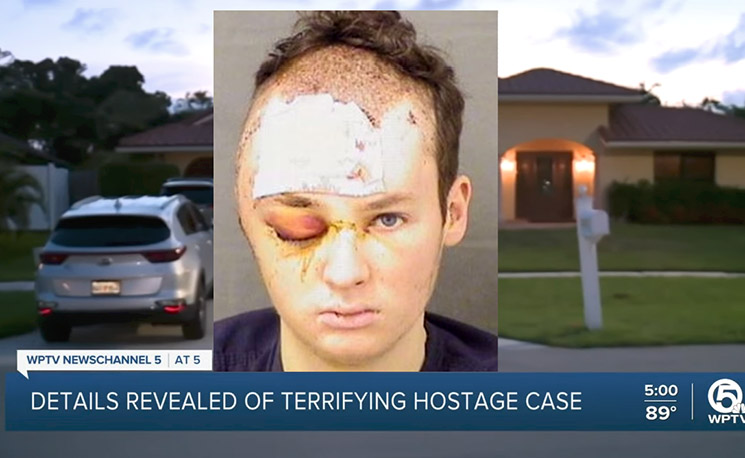 A female social worker/therapist who was tortured, beaten and raped for over 15 hours by a 20-year-old client was rescued after a cop shot him in the head.

Tzvi Allswang (pictured above) survived and is now in police custody. He faces charges of armed false imprisonment and aggravated assault with a deadly weapon, according to the Palm Beach County Sheriff's Office.

The 25-year-old social worker told police she went to the patient's Boca Raton, Florida home on Friday, July 1, to help him prepare for a job interview as part of his therapy.

She said she was aware that Allswang was previously charged with sexual battery as a teenager.

The victim said she had visited the client's home multiple times in the past and someone was always home with him.

However, when she arrived at the home this time, she noticed he was alone, but she entered the house anyway.

After the therapy session ended, the victim attempted to leave, but Allswang blocked her way.

She said he became aggressive and told her she couldn't leave. Then he bound her hands behind her back with duct tape, WPTV reported.

Allswang took her cell phone, put it on airplane mode, and wrapped it aluminum foil and duct tape, WPTV reported.

The next day, deputies from the Palm Beach County Sheriff's Department conducted a welfare check at the home after the victim's partner called to report she wasn't answering her phone or texts.

The officers knocked on the front door, got no answer, and left.

About two hours later, the officers returned to the home after the victim's partner called to say her car was in the client's driveway.

The deputies heard a female voice screaming inside the home and forced entry just after 9:30 p.m. Saturday.

They found Allswang hiding in a master bedroom closet with the victim. He was holding a butcher knife to her throat.

When he refused repeated requests to drop the knife, an officer shot him in the forehead.

Allswang was taken to a local hospital where he was treated for a gunshot wound and released into police custody.

The victim was treated at a separate hospital for numerous injuries. Her condition is unknown.

The suspect was denied bond at his first court appearance on Monday. He wore a hard plastic helmet and was wheeled into court in a wheelchair.

According to WPTV, Allswang's parents told police they were out of town and they believed their son was away at camp.