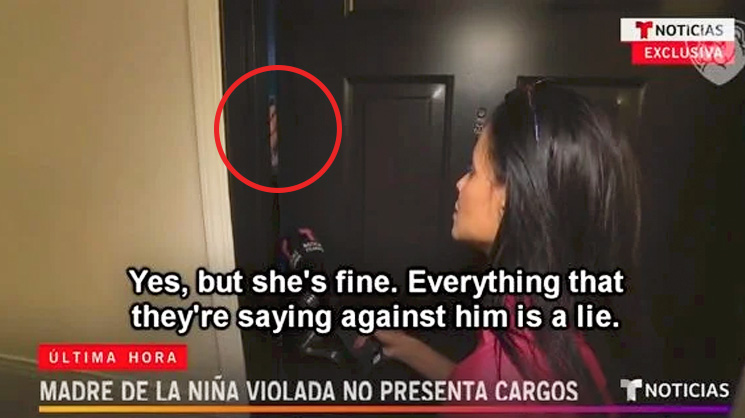 The mother of a 10-year-old pregnant girl who traveled across state lines for an abortion gave a bizarre interview to Spanish language TV station Telemundo.

The woman told Telemundo on Thursday that her daughter is "fine," and she suggested that the news media lied about her daughter's alleged rapist, Gerson Fuentes, 27.

A reporter visited Fuentes' home when the victim's mother answered the door. She did not give her name, nor did she want to be on camera, according to The Daily Wire.

The girl's mother seemed anxious and desperate to deny the allegations against her alleged live-in lover.

"Everything they are saying against him is a lie," the woman said in Spanish, that was translated to English by Telemundo.

The mother said her 10-year-old daughter "is fine".

Fuentes was arrested and charged with first-degree rape on Thursday. His arrest came more than a week after the girl's story went national - and only after GOP lawmakers and conservative media outlets questioned the validity of the story.

Fuentes allegedly lives in the home with the girl's mother and other minor children.

Jorge Bonilla, who serves as Media Research Center's director of MRC Latino, speculated that the woman is frightened because she is illegal, and she feared deportation or the removal of her other children from the home.

"The mother's distressed defense of the rapist suggests that, a: She is also here illegally and fears deportation," said Bonilla. "B: The defendant is the family's sole source of income, c: There is a likelihood of other children in the home, d: Mom is exposed to removal of the children under dependency proceedings (failure to protect)."

Twitter expressed outrage after the interview. Many believe an American citizen who raped a child would have been arrested immediately and the children removed from the home by CPS.

Question: Do you believe the defendant was not arrested immediately because he is illegal?