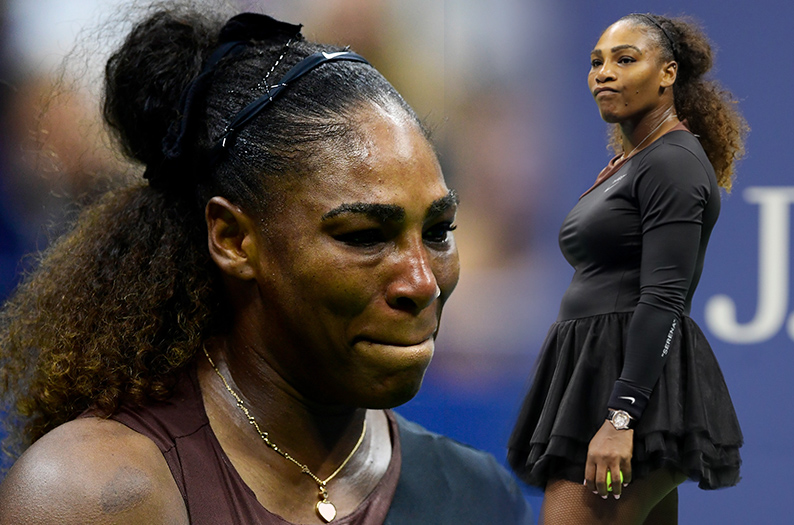 Social media is still buzzing about an Australian newspaper cartoonist's editorial cartoon of tennis superstar Serena Williams. The cartoonist, Mark Knight, depicted Serena as a caricature of an entitled, spoiled baby throwing a tantrum on the tennis court during her loss to Japan's Naomi Osaka on Saturday.

I didn't think the cartoon was racist the first time I saw it on Monday, because I viewed it from the perspective of a fellow artist who doesn't see racism in everything.

But now that I've taken off my glanced at the cartoon again (without rose-colored glasses on), I do see the elements of racism that is causing outrage among some Black people on social media.

To be honest, I did find it odd that the artist depicted biracial Naomi as a blonde white woman and chair umpire Carlos Ramos as a white man.

Even though the cartoon depicts exaggerated racist features -- and the artist appears to be arrogantly knowledgeable of that fact -- the cartoon should not be censored just to spare hurt feelings.

Editorial cartoons express the artists' opinions, and it is their job to provoke passionate debate and force viewers to think outside the box.

Typical of the liberal mindset, Twitter.com censored the cartoon and banned the artist for expressing his personal view -- rather than leave the drawing up to spark healthy debate about racism in America and the world.

The arts and books are the last forms of freedom of expression in a civilized society.

Remember when Hitler ordered the burning of books to exercise his dominance and control over free-thinking Germans? Amazon.com has already started banning books by conservative writers.

Art is objective, and it should be free of influence by subjective opinions and hurt feelings.

We are all in danger of losing our freedoms in America if the arts and books are destroyed to appease liberals who see offensive symbols everywhere they look.

Criticism of Mark Knight's Serena Williams cartoon shows the world has gone too PC & misunderstands the role of news media cartoons and satire. Poor behaviour in any sport needs to be called out. #media #cartoons #markknight @Knightcartoons @theheraldsun https://t.co/KQFuvIJp0Q pic.twitter.com/sRo3AQ1cJW

African Americans were drawn in a similar manner with overly exaggerated features during the Jim Crow Era. 1/2

Just because YOU don’t find it racist, it doesn’t mean that it isn’t. I’ve seen countless African Americans tweet that they’re really offended by the drawing. It’s not up to us to tell them they’re not to be offended. Wake up.

The Jim Crow Era was an incredibly racist time in America in the midst of segregation, and racist cartoons with enlarged noses and lips.

Here’s some education for free if you’d like enlightenment. https://t.co/cbGosWK7Q5

I’d like to also know what’s racist about it? You offendees do know what a ‘charicature’ is right? Or should some public faces not be lampooned because, well, they’re black? ????. Isn’t THAT discriminatory?

How her face was drawn was disgusting, reminded me of the propaganda nazis gave out of Jewish people with giant noses and black people with huge lips