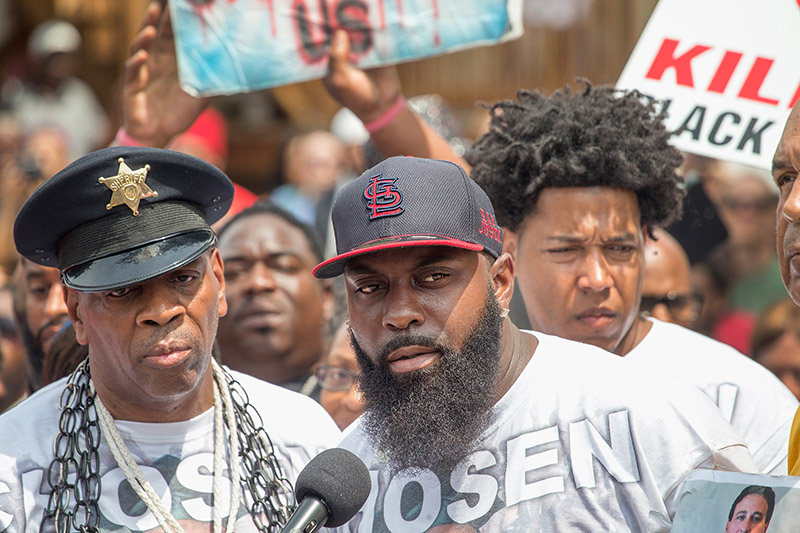 Michael Brown Sr., the father of slain 18-year-old Michael Brown Jr., is requesting a portion of the $90 million Black Lives Matter received in donations in 2020.

Michael Jr. was killed by a white police officer in the St, Louis suburb of Ferguson, Missouri on August 9, 2014.

Mike Brown Sr. is pictured above (center) addressing the crowd during a memorial service marking the 1st anniversary of his son's death on Aug. 9, 2015 in Ferguson.

The International Black Freedom Alliance tweeted that Mike Brown Sr. "has received only $500" from BLM.

According to a report by theGrio.com, the Black Lives Matter organization received $90 million in funding in the aftermath of the deaths of George Floyd, Ahmaud Arbery, Breonna Taylor, and others.

BLM co-founder Patrisse Cullors claimed she is "reinvesting the money," to build "out the institution we've been trying to build for the last seven and a half years."

As more questions are raised about the disbursal of the funds, BLM announced a "Survival Fund" for Black people to apply for 3,000 micro grants of $1,000 each, no strings attached.

At least 300 people had been approved for grants as of last week, according to VladTV.

Brown Sr. has requested $20 million from BLM organizers as a good faith gesture, since they used his son's death as a catalyst for change.

Brown Sr. has stated that he hopes to use the $20 million for the Chosen For Change Foundation, the Mike Brown Community Center, organizing grants for Ferguson protests and activists, various programs and services in the Black community, and the annual Aug. 9 commemorations of Brown's death.