President Joe Biden announced Wednesday that he will cancel up to $20,000 in student loan debt for Pell Grant borrowers and up to $10,000 for borrowers who earn less than $125,000 a year.

The loan forgiveness plan also applies to households that earned less than $250,000 a year.

The plan will eliminate $20,000 in student debt for the poorest borrowers who received Pell Grant loans for college education. 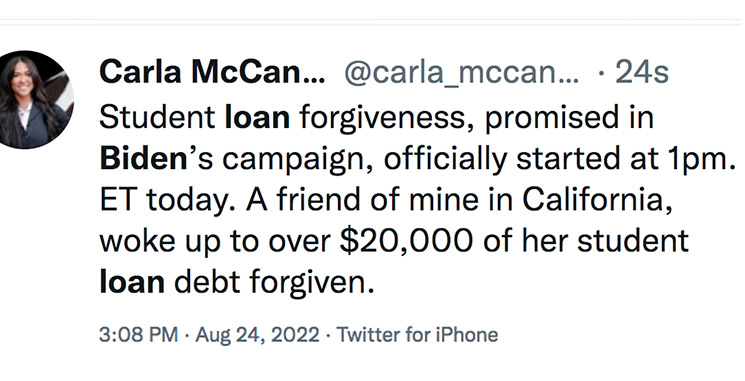 More than 40 million borrowers will benefit from the unprecedented $300 billion forgiveness plan.

In keeping with my campaign promise, my Administration is announcing a plan to give working and middle class families breathing room as they prepare to resume federal student loan payments in January 2023.

Republicans argue that the bailout plan benefits rich kids who attended law school and medical school and can afford to pay back their loans.

Senate minority leader Mitch McConnell called the plan “student loan socialism” and a “slap in the face” to those who already paid off their debt.

The GOP said rich kids who live at home with their parents will benefit most from the loan forgiveness plan.

Republicans warn that Democrats will face ramifications during the midterm elections in November.

Republicans vowed to challenge the plan in court.

Student loan forgiveness, promised in Biden’s campaign, officially started at 1pm. ET today. A friend of mine in California, woke up to over $20,000 of her student loan debt forgiven. #J4398news #soccom https://t.co/xXqEpmvWl6