The NFL announced it will not make up the Buffalo Bills-Cincinnati Bengals game that was postponed Monday night after Bills safety Damar Hamlin suffered a cardiac arrest.

Instead, the Bengals will take on the Baltimore Ravens at home at 1 p.m. on Sunday, Jan. 8.

The NFL’s full statement is below. 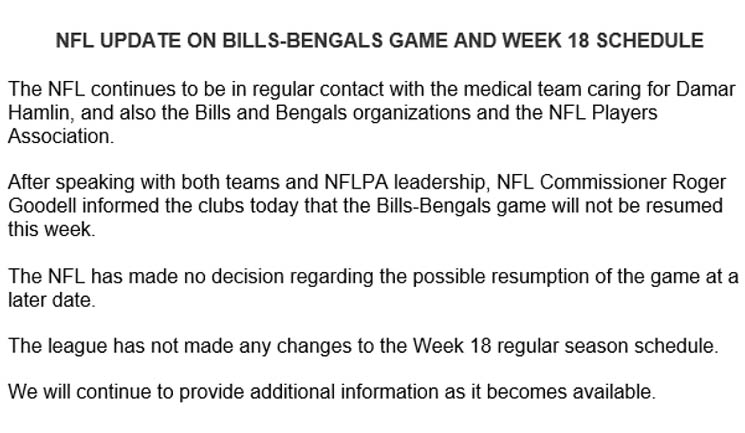 NFL executive Troy Vincent slammed a report that players were given 5 minutes to “warm up” after Hamlin suffered a cardiac arrest and collapsed on the field Monday night.

Doctors performed CPR on Hamlin for 9 minutes before restoring the 24-year-old player’s heartbeat on the field. He was transported to a hospital, where he suffered a second cardiac arrest. He is listed in critical condition on a ventilator.

ESPN play-by-play commentator Joe Buck said repeatedly on air that the NFL gave both teams 5 minutes to “warm up” before resuming the game. But both head coaches allegedly refused to send their players back out on the field.

Vincent slammed the report in a media briefing early Tuesday. The senior vice president of football operations said there was no 5-minute warning to warm up and resume playing.

“I’m not sure where that came from,” Vincent said. “Frankly, there was no time period for the players to get warmed up. Frankly, the only thing that we asked was that [referee] Shawn [Smith] communicate with both head coaches to make sure they had the proper time inside the locker room to discuss what they felt like was best.”

He added: “I was the one… that was communicating with the commissioner. It never crossed our mind to talk about warming up to resume play. That’s ridiculous. That’s insensitive. That’s not a place we should ever be in.”

However, Buck said the information he repeated on the air came from “the league.”

Joe Buck said on the air it came “from the league.”

If it is inaccurate, someone from “the league” surely could have called them to clarify in that moment. https://t.co/fM3UPQMZDY

The #NFL suggesting a return to play after ‘five minutes’ this evening tells you everything you need to know about how the league prioritizes player safety.#5minutes

The Monday Night Football game between the Bills and Cincinnati Bengals was postponed in an unprecedented move by the NFL.

Hamlin’s family released an update Tuesday morning, saying, “He’s fighting.” An ABC News reporter who was at the hospital said the family is in “good spirits.”

Doctors say the hit on Hamlin may have triggered an extremely rare heart condition called Commotio cordis, which usually affects boys age 17 and under. Commotio cordis is a rare form of ventricular fibrillation caused by a blunt blow to the center of the unprotected chest in young boys or teenagers.

Hamlin stopped breathing due to a condition called anoxic encephalopathy – a lack of oxygen supply to the brain caused by cardiac arrest. There’s a possibility that he may have suffered brain damage.

Players on both teams wept while team doctors worked to restore Hamlin’s heartbeat. The Bills players and staff said a prayer for Hamlin on the field before the game was postponed.

In less than 2 hours, kindhearted fans on Twitter donated over $3 million to a toy drive created by Hamlin in 2020.

Summer Walker: ‘I reached my goal of hella kids before 30’