Ethiopia Habtemariam's dizzying climb up the ladder of success began when she was an intern at LaFace Records back in the early 90s. She stood out even as an intern because she was one of the kindest, sweetest people you could ever meet in the music industry. One of Ethiopia's strong points is her ability to connect with people from all walks of life and to make a difference in their lives.

So it is no surprise to hear that Universal Music Group has named Ethiopia Habtemariam as the new head of Motown label! In addition to taking over Sylvia Rhone's former job, Ethiopia is also Sr. Vice President of Creative for Universal Music Publishing, where she was instrumental in signing such artists as Justin Beiber, Ciara, Polow Da Don, Chris Brown and Ludacris to publishing deals!

Ethiopia has been with Universal Music Group since 2003. Last year, she was promoted to Senior Vice President and Head of Urban Music, according to The Wrap.

Ethiopia is a bright, shining example of what you can achieve when you work hard and you are kind to others.

Here's what a friend had to say about Ethiopia:
"She's so incredible at her job that it was time for them to give her that position! She's just incredible!" 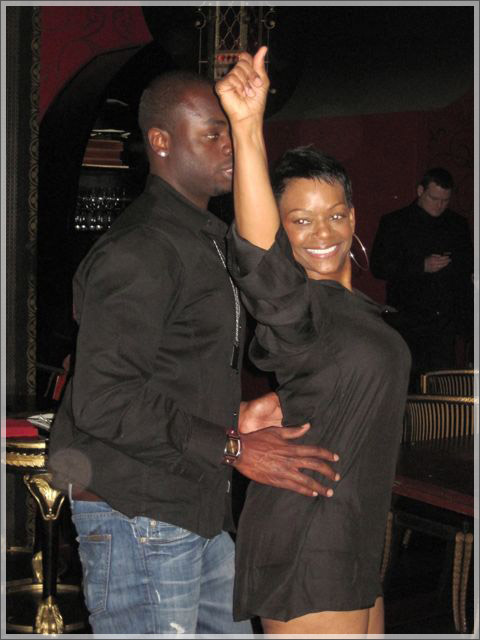 Shanae Hall, noted author of the book "Why Do I Have To Think Like a Man?", partied the night away with Steve Harvey's ex-wife Mary Harvey recently. Even though these ladies went through a rough patch with their men, they aren't standing still and letting cobwebs grow on them.

END_OF_DOCUMENT_TOKEN_TO_BE_REPLACED

Thanks to loyal reader Kimberly W. for the pics!

It wasn't just another party for reality TV star Kim Kardashian last night at Tao in Las Vegas. It was a celebration to mark the end of her troubled history as a single woman who had problems keeping a man.

After running through half the eligible bachelors on both coasts, the 30-year-old silicone Queen decided New Jersey Nets star Kris Humphries, 26, would do nicely.

Kim threw her Bachelorette shindig -- complete with midget exotic strippers -- at Club Tao in Vegas with her mom, Kris Jenner, sisters Khloe and Kourtney, and friends such as La La Vazquez-Anthony, 32, in attendance.

END_OF_DOCUMENT_TOKEN_TO_BE_REPLACED

Well-connected industry sources are sometimes crucial to the success of any blog. Without industry sources, you're playing a guessing game, or you're getting your info from other blogs.

When R&B singer Monica’s new song, “Anything To Find You,” featuring Rick Ross and Lil Kim, leaked last week, I told you at the time that, according to my record label source, the track was not an official single.

It turns out that legendary rapper Biggie Small's mother, Voletta Wallace, gave permission for Missy to sample Biggie's "Who Shot Ya" -- but Mrs. Wallace has the final say on who can jump on the track.

Yesterday, when the news hit Twitter, Lil Kim's angry fans blamed Monica, who interrupted her honeymoon at a luxury resort on the beautiful island of Anguilla in the Caribbean, to explain the complex situation to her followers on Twitter.com.

“I am just finding out what has happened to my single and myself & Missy are beyond hurt that @LilKim was removed. She’s our friend, a legend & @LilKim will get the respect she deserves at all cost. The clearance was revoked & I’m fighting to get it reinstated by the Biggie Estate. We respect all parties involved & were gonna do WHATEVER to keep the song as is because @lilKim the bizness on the record…I am as thorough as they come and I LOVE @LilKim bottom line is Ms Wallace has the final say and she said No. If we put it out we get SUED”

I wish I could tell you more, but that's the problem when you rely on industry sources: there are certain things you just can't tell your readers.

Don't expect there to be an easy resolution though; the music industry is an unforgiving business. Monica's new album drops later this Fall.

I'm an avid reader and I know you are a fan of natural beauty and I feel that we feel the same way on how the media portray us "black" women when it comes to our hair and brown skin (like we aren't good enough). This was a very huge deal for me because I grew up with bald edges and very nappy hair and felt that "long straight" hair was the only way for any brown skinned girl to make it. I'm working on a blogging site (BoldisBeauty) where I want all girls of all races to come share their insecurities and more...and come OUT to face their fears of the world. When I finally came out I felt like a million bucks and I want to share that feeling with millions of other women/girls who are prisoners of their own bodies.

Reality TV star and entrepreneur Khloé Kardashian-Odom is a big fan of Sandrarose.com. Remember I told you that Khloé missed her friend Monica's wedding because she had to fly back East for personal reasons? Well, while in New York, Khloe found the time to attend the HPNOTIQ Harmonie launch party. She wore an Alexander McQueen Jacquard Butterfly cap-sleeve dress (retail: $1,275). This black, blue, and white kaleidoscopic butterfly body fitted dress features a rounded neckline and capped sleeves.

I keep hearing this name Tahiry, but I have no clue what she does for a living? Is she one of those video girls who catapulted to fame because she found good caulk that doesn't leak? Or is she famous because she did somersaults and landed on some rapper's peen? I'm just asking, because apparently, you don't need any kind of talent to be famous and host parties in nightclubs these days.

Tahiry hosted the Heineken Red Star Access Presents G.O.O.D. Music Event in Atlanta featuring Cyhi da Prynce (whoever that is) and Pusha T (at least I know who he is) at Club Echelon 3000 on Friday (July 8) in Stone Mountain, Georgia.

Last week, loyal Sandrarose.com member April Lamons (BlackBarbie404) held a launch party for her new online business, GLAMSHOPOnline.com, at the M Bar in Atlanta. The event was sponsored by Seraphic, and the SR family came out to support. Some of my loyal readers didn't want to be identified (I'm not sure why), but eastpointvet, Suga Shay and Diva Mama were in the house!

Women, picture yourself walking into your favorite retail outlet where your fashion couture taste buds are savoring because you find everything to your liking feeling you could roll your bed up in there and call it your closet. Well now you can do just that with GlamShopOnline.com – an online boutique featuring chic items for women that are both trendy and beautiful. From dresses, shoes, blouses, shorts, purses, jewelry and even hair pieces, Glam Shop Online will eliminate the broker offering the savings onto the customers who will be paying a fraction of what is paid for in current retreated fashion stores. Glam Shop Online will make sure that all items sold are current with the latest fashion trends, styles and forthcoming seasons all at an affordable cost while giving the ultimate online shopping experience.

END_OF_DOCUMENT_TOKEN_TO_BE_REPLACED

Thanks to Lady Jia for uploading episode 4 of VH1's tasteless, but juicy scripted series "Single Ladies"! It gives me great pleasure to inform you that "Single Ladies" beat out "Barbeque Wives" in both of their time slots in the television ratings for Monday night! That's significant because this is BBQ Wives' 3rd season and it took "Single Ladies" only 4 episodes to surpass them!