Sept. 25 is rap mogul T.I. Harris's 32nd birthday, and his birthday celebration will coincide with the taping of BET's 2012 Hip Hop Awards in Atlanta!

The biggest stars in Hip Hop will be in town to attend the taping of the BET Hip Hop Awards, and many of them will attend T.I.'s birthday party. Sandrarose.com was given the honor of hosting the red carpet for T.I.'s star-studded birthday bash this year!

To make sure Sandrarose.com's readers gets the up-to-the minute info from the party, I am looking for a fresh young face to host the red carpet and interview celebrities for Sandrarose.com's live video Ustream from the event!

END_OF_DOCUMENT_TOKEN_TO_BE_REPLACED

You, the cast of Love & Hip Hop Atlanta, and other VIPs, will be among the first to screen the premiere episode of LHH Atlanta before it premieres next Monday, June 18!

RSVP IS REQUIRED! You will be turned away at the door if you don't have an invite. If you are my lucky winner please plan to arrive promptly at 7PM. If you're late you won't get in!

To win a private invite, leave a comment in this post and tell me why you think you should win the invite! Good luck!

Special thanks to MusicBusinessPolitics.com for the invitations!

You can be one of 10 lucky readers to win an autographed copy of Monica's New Life CD! New Life is Monica's seventh studio album, which is in stores tomorrow (April 10)!

Blue Ivy's parents Beyonce, 30, and Jay-Z, 43, were spotted while on holiday near Nikki Beach in St. Barth over the weekend. Beyonce made news last week when she launched her personal Tumblr page featuring pictures which were supposed to clear up the pregnancy rumors. But the pictures only succeeded in muddying up the waters even more. The pictures that I saw on another blog shows Photoshopped pics of Bey's belly, or pics of her in silhouette. clearly she thinks her Stans are as stupid as she is. It doesn't matter how many pics Beyonce posts on her Tumblr page: she was never pregnant with Blue Ivy. Now, what she should do is cut the crap and put up the pics of her surrogate.

END_OF_DOCUMENT_TOKEN_TO_BE_REPLACED

Yesterday, Tameka "Tiny" Harris' publicist reached out to Sandrarose.com with the great news that Tiny is expanding her successful Tiny's Nail Bar to a new location.

"We are so excited about the success of Family Hustle and especially proud of Tameka as a business woman, mother, wife, producer and executive producer," wrote Tenisha Ramos of Somar Entertainment in an email.

"As an entreprenuer giving back to the community Tameka is looking for 10 nail technicians and a Spa Manager," she announced.

Tameka is also announcing the winner of her Family Hustle giveaway February 6, 2012 on her Twitter page for the best Family Hustle story. People can register by going to www.tinysnails.com or www.hypehair.com.

Above is an exclusive photo of Tiny by celebrity photographer Nicky Woo from Tiny's feature in EBONY magazine this month.

Yesterday, T.I. released this trailer for his much-anticipated mixtape titlted F*ck Da City Up. The mixtape drops at midnight on T.I.'s official website, Trapmuzik.com, and on Twitter.com.

I've never heard of a trailer for a mixtape, but we're talking about the innovator, T.I., who sets the standard for these other lessors to try and catch up.

Since it's so close to Christmas -- and I did promise one more giveaway this year -- I've decided to give away 1 $500 Saks Fifth Avenue gift card to each of the first 2 readers who correctly answers the following 2 questions (you can answer one or both questions).

You must be a registered member of Sandrarose.com blog to enter. The gift cards cannot be redeemed for cash or additonal gift cards. Saks gift cards are good for purchases made at Saks Fifth Avenue stores, OFF 5TH stores or online at Saks.com.

1. What timepiece is T.I. wearing in the pic below.

2. Why do ballers love wearing this particular watch?

Loyal reader BK2ATLMAN wrote in to let us know all about his experiences at T.I.'s "A King Of Oneself" Birthday Brunch on Sunday, October 2nd!

I just wanted to thank you again for the tickets. It was a great event. Before I tell all the details, I also wanted to give a shout out to Hannah Kang, who welcomed me and my business partner, made sure we had our table and was just an overall great person. Cute smile too...

She even made sure T.I knew I was the winner and brought him to my table to chop it up a bit. Also it was recorded for his [reality] TV show.

The place was beautiful, everything was setup perfect. There was an open Ciroc bar, so that was one of my best friends throughout the day. Can't believe everyone was getting sauced that early in the day. The food was good, except for some egg seafood thing that just wasn't the business. The chicken breast was the bomb, but after a couple bites it was done.

More Good:
My table was the bomb, on the left of me I had the A&R from badboy and on the right side of me I had Shawn Holiday from Interscope, who I already knew. I made tons of new connections and might have to cut you a check in the near future.. lol.

END_OF_DOCUMENT_TOKEN_TO_BE_REPLACED

@sandrarose is giving away two VIP invites to @Tip's AKOO brunch on https://sandrarose.com 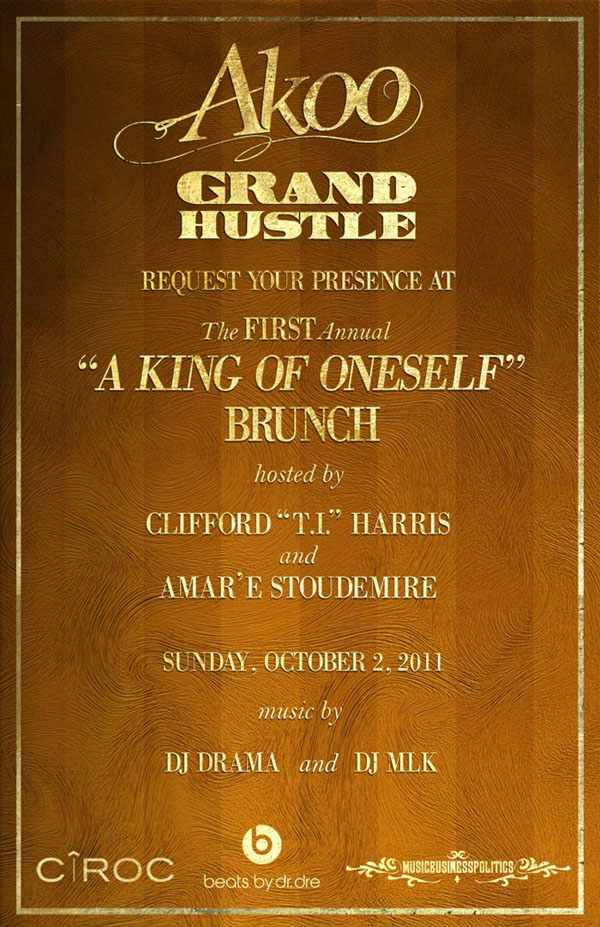 Last night was the season premiere of "Dancing With the Stars" on ABC, featuring the first transgender dancer and TV's favorite defense attorney.

Following the first round of dances, Nancy Grace, Ron Artest of the LA Lakers, Khloe's younger brother Rob Kardashian, and transgender Chaz Bono are all tied for dead last in the competition. One of them will go home tonight.

It''s hard to say which one out of the four was the worst dancer. But since they are all novices at it, they deserve kudos for at least stepping up to bat.

Chaz's introduction was a slap in the face to the supporters who said children wouldn't know whether she was a male or female.

As the producers flashed a cute pic of her as a little girl, Bono mentioned that she was born a female, and now thinks she's a man, despite retaining her female productive organs.

Good luck explaining that one to your kids!

Watch the videos of the first dances after the break.

END_OF_DOCUMENT_TOKEN_TO_BE_REPLACED

Our lucky Louis Vuitton winner, Keysha Willis, stopped by Lenox Square Mall over the weekend to claim her Louis Vuitton Montorgueil PM handbag. My apologies to Keysha for the runaround this weekend. We initially told her to meet us at Atlantic Station at 2pm. Then we changed the time to 3 and 4, and finally we called Keysha and asked her to meet us at Lenox where we were doing last minute shopping for Alex Gidewon's ultra private birthday party tonight.

Keysha was a good sport, and she was so happy when she saw her bag! She said, "Thank you! Oh wow! Oh my God, this bag is thousand dollars? This is really nice! I like Keysha. She deserves this bag because she cares about others and puts others first! Bless you Keysha!

Thank you to Prince Williams of ATLPics.net for the pics!