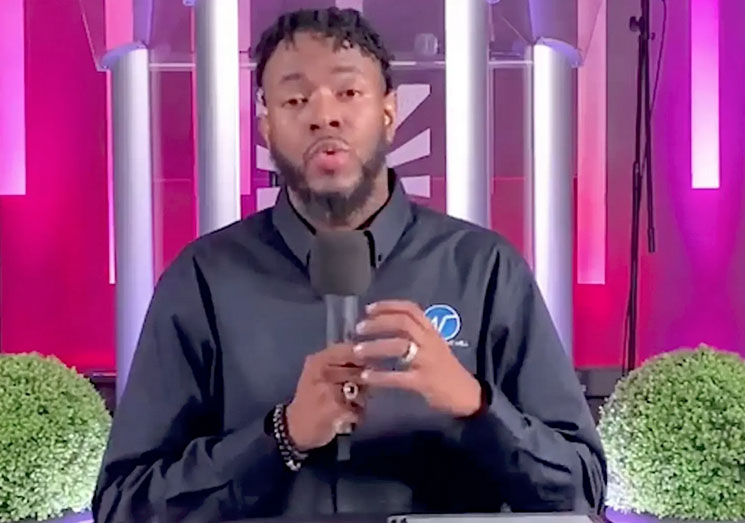 A Missouri pastor went viral after he criticized his congregation for not buying him a high end watch.

A TikTok video shows Pastor Carlton Funderburke of the Church at the Well in Kansas City berating his flock for being "broke" and cheap.

The pastor can be heard chastising his congregation for not buying him the Movado watch he requested. 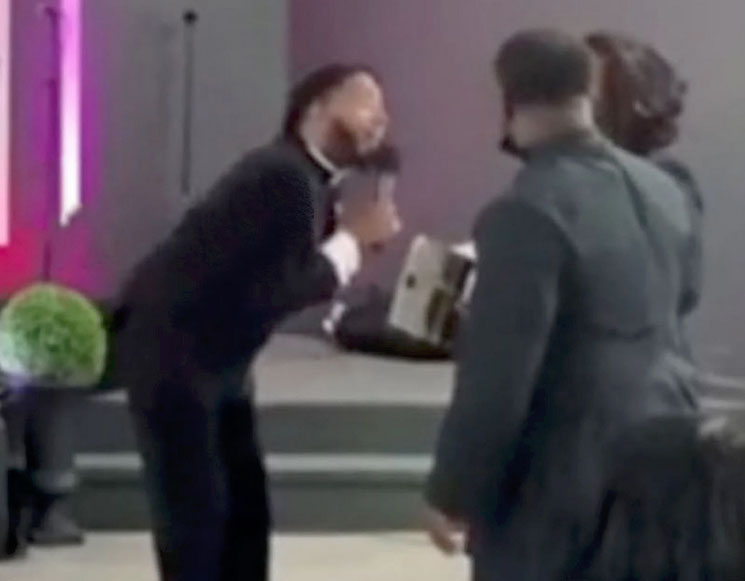 "See that's how I know you still poor, broke, busted, and disgusted because of how you've been honoring me," he said during a fiery sermon on August 7.

Funderburke rebuked the parishioners for splurging on themselves rather than "honoring" him with material things.

He continued, "You can buy a Movado watch in Sam's! And y'all know I asked for one last year. Here it is the whole way in August, I still ain't got it... Let me kick down the door and talk to my cheap sons and daughters!"

Surprisingly, many in the crowd agreed with him.

Funderburke later apologized after the clip went viral on social media. He said the "video clip does not reflect my heart or my sentiment toward God's people."

Kansas City Pastor GOES OFF on congregation calling them "poor, broke busted and disgusted" because they didn't give him enough money to buy a new watch he's been wanting. It's pastors like these that give the church a bad name smh an also why a lot of our generation left the church. What y'all think? ? 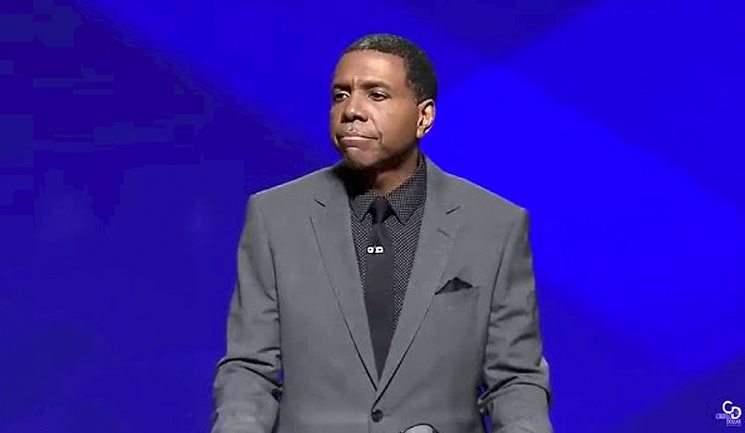 In a new video titled "The Great Misunderstanding," Pastor Dollar admits he was wrong for asking his congregation to pay for his $65 million private jet years ago.

"Today I stand in humility to correct some things I've taught for years and believed for years."

Pastor Dollar said asking parishioners to pay 10% of their earnings is wrong and sinful. He said God never instructed his flock to pay 10% to brick and mortar churches.

Instead, Dollar urged his congregants "to take a portion and put it aside. Now if you want to give 10% that's fine but, you know, he didn't say that."

"You are under grace not under laws," he said in the June 26 video.

It was a different message from the one he preached over a decade ago.

Dollar was among the first of the mega-church preachers to begin demanding W9 forms from his parishioners so he would know exactly how much income they earned -- and how much they should be tithing.

In 2010 a loyal reader wrote in an email to Sandrarose.com that Dollar threatened his flock, saying if they didn't tithe to him they would go straight to hell. He also reportedly said "how he wished he could shoot those that didn't tithe right." 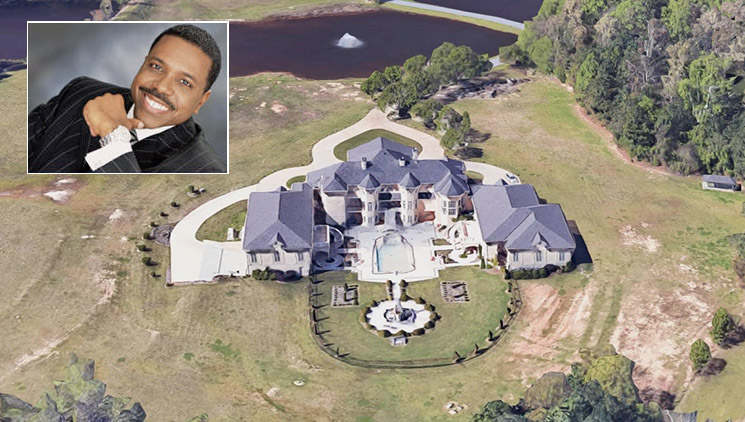 Other pastors criticized Dollar's message, saying he got it wrong.

"They quote Bible upside down, that's why you have to be a Bible student, even a pastor can deceive you, please read Bible for yourself," said Pastor David Ibiyeomie.

"So that somebody cannot preach something up-side-down and you believe. All manner of things are everywhere, some people preach tithe and they said no more tithe because they did not have a solid foundation in the Bible and some of you believe it," Ibiyeomie added.

Question: Will you continue to pay tithes now that Pastor Dollar says it's all a scam? 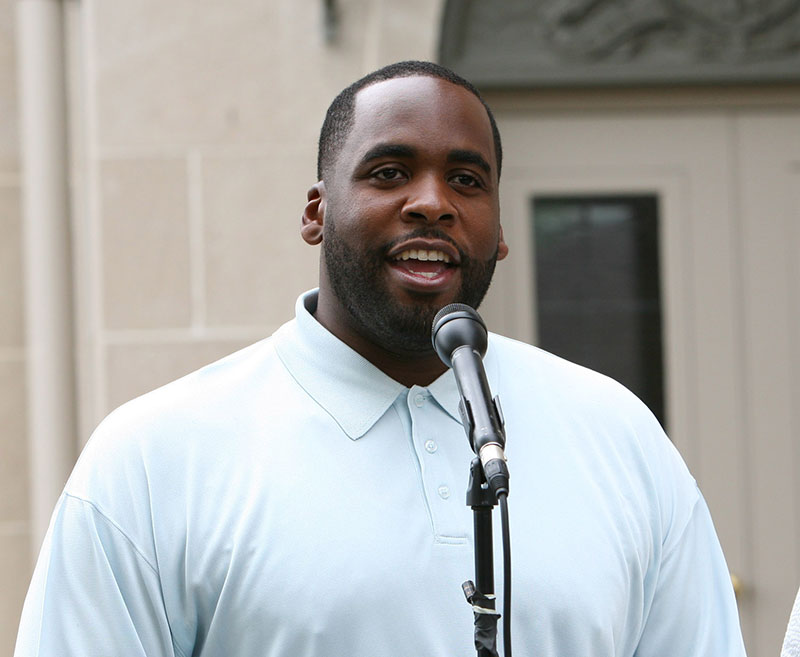 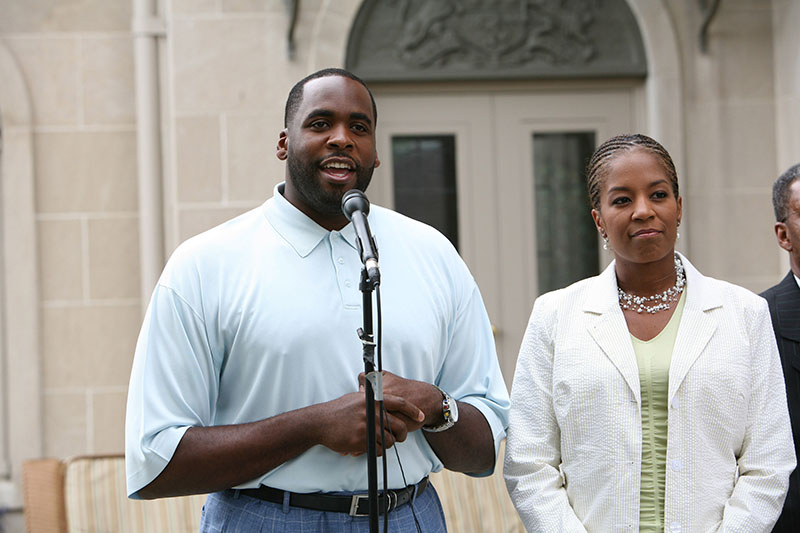 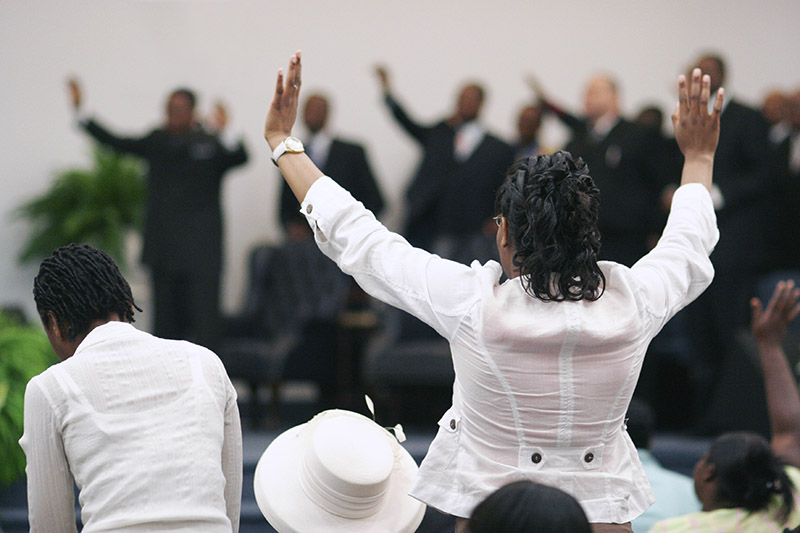 Black pastors say they will adopt a wait-and-see approach rather than recommend the Covid-19 mRNA vaccine to their congregations.

12 Black pastors interviewed by Reuters news agency cited concerns over the rapid development of the vaccines and the lack of evidence for or against long-term side effects.

A.R. Bernard, pastor of a Brooklyn megachurch, said he is concerned that Black people are being singled out as guinea pigs for a vaccine that is not fully tested.

"We're concerned about it being tested on persons of color," Bernard told Reuters.

The Centers for Disease Control has urged all 50 states to consider giving Blacks and Hispanics priority over whites when distributing the vaccines.

Bernard and other Black pastors declined a major healthcare organization's invitation to sit on a committee aimed at promoting the vaccines within the Black community.

Bernard, who was hospitalized with the virus in March, said he wants to take a "wait and see" approach until there is more information about the vaccine's long-term effects.

Dismayed health officials had hoped that the Black clergy could convince Black people to roll up their sleeves for the vaccine.

A recent poll revealed that just 49% of Black people say they will take the vaccine vs. 63% of white people.

Black pastors cite a deep-seated mistrust in the government and the medical establishment among Black people.

"What we're dealing with right now is the byproduct of... generations of distrust, suspicion and fear with regard to how medical systems work," said Edwin Sanders, head of Metropolitan International Church in Nashville, Tennessee.

"I can't in good faith tell my people to accept this wholesale, but I also am not trying to support any type of baseless conspiracy theories. It's a tightrope that I have to walk here," said Earle Fisher, pastor of the Abyssinian Missionary Baptist Church in Memphis, Tennessee.

Of the 12 pastors interviewed by Reuters only 1 said he is willing to take the vaccine but he wouldn't recommend the shots to his parishioners. 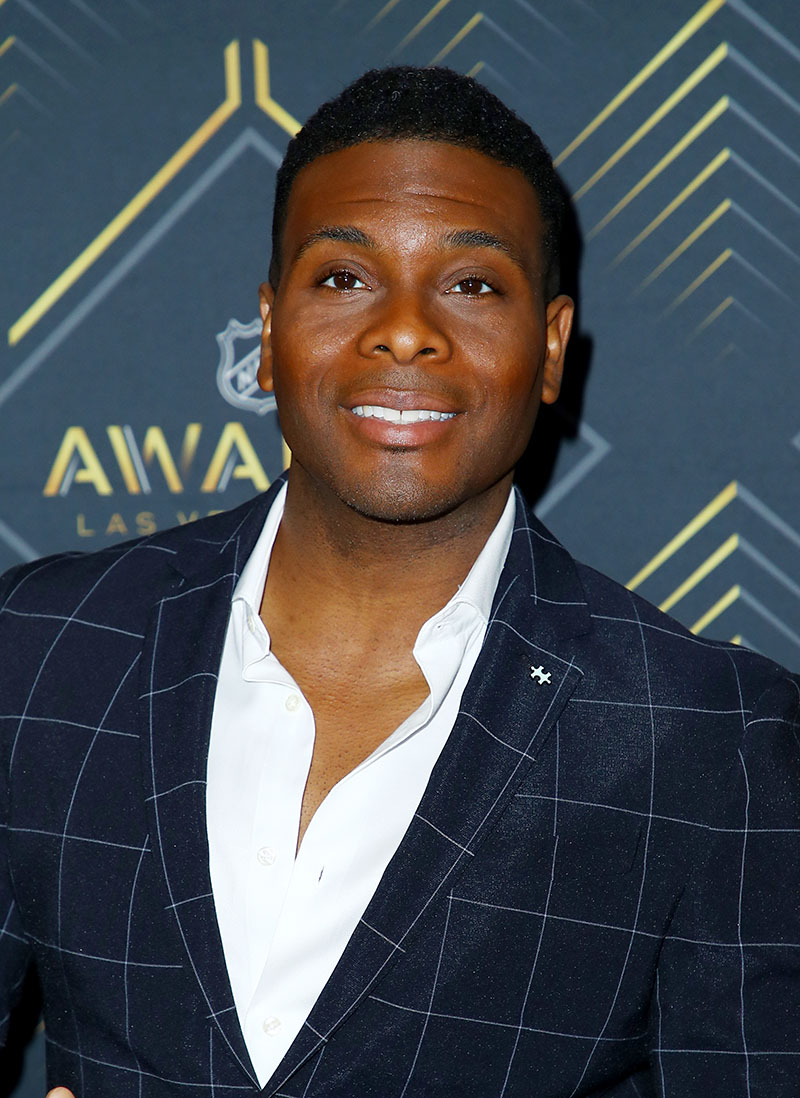 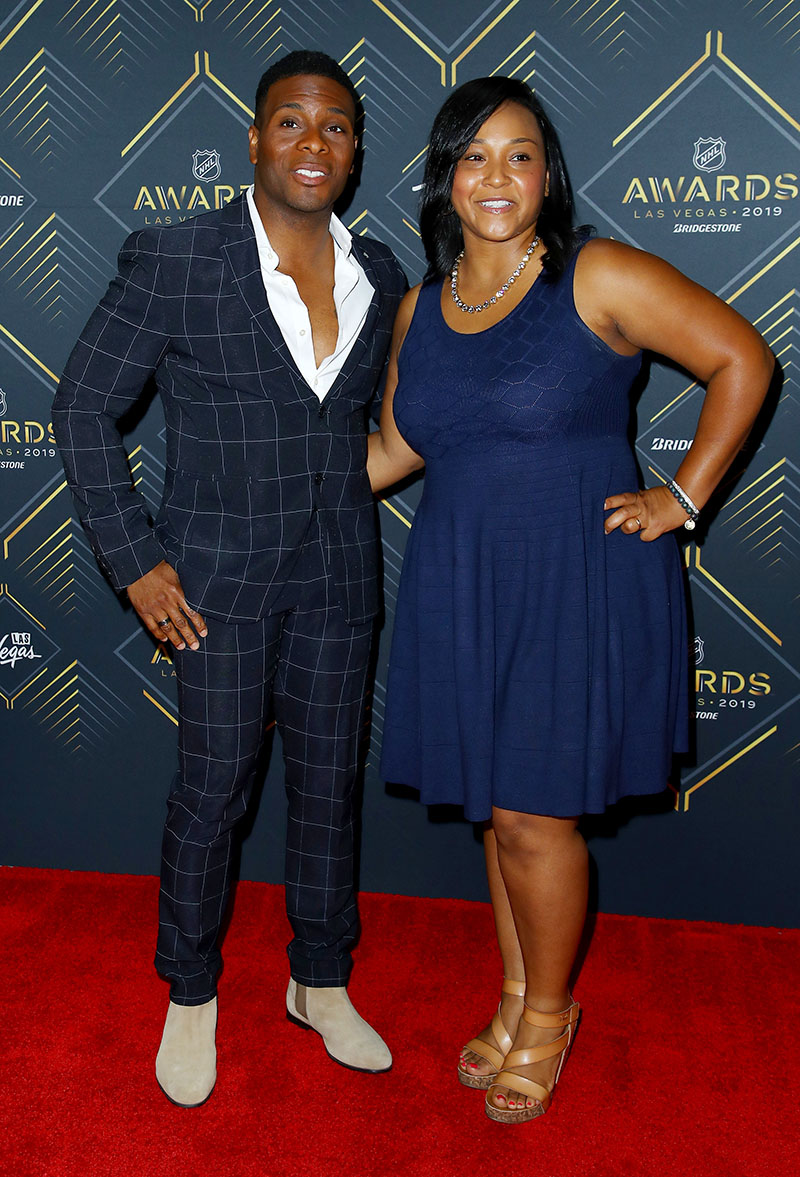 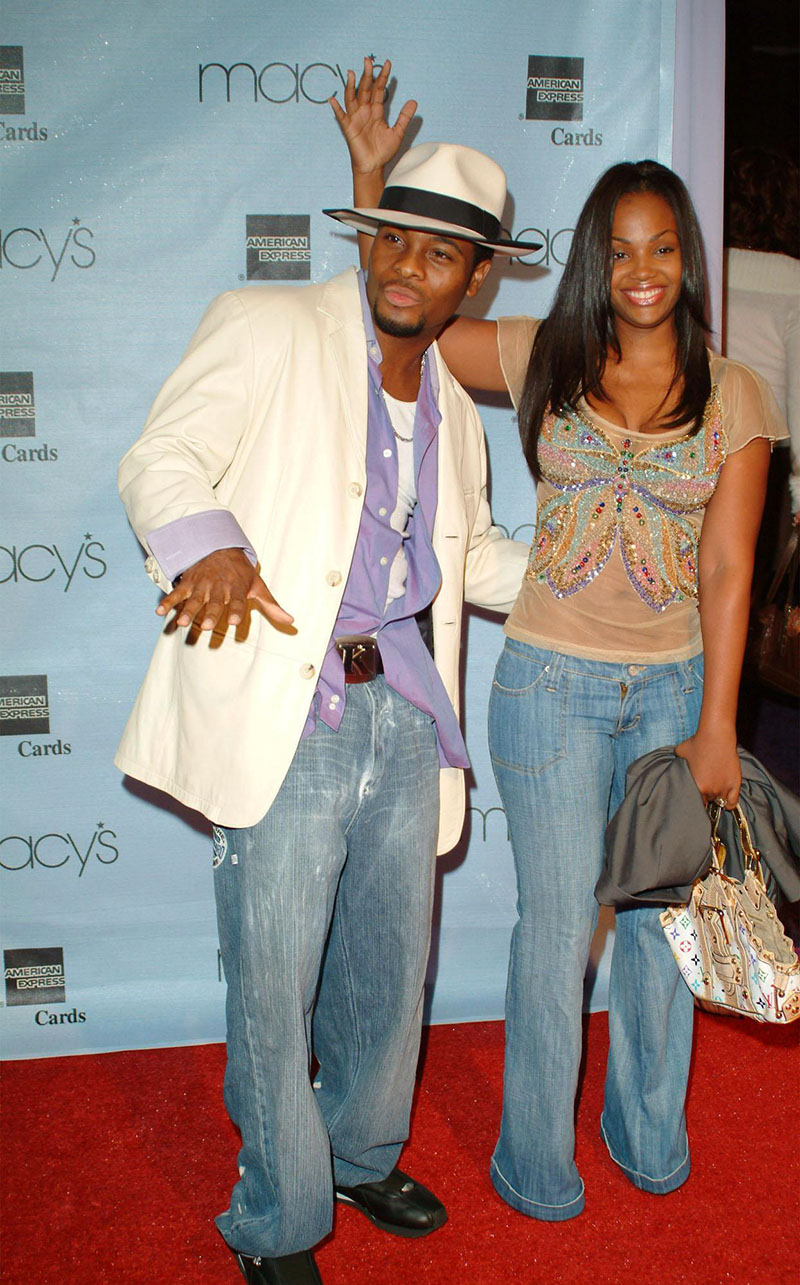 New Hope Missionary Baptist Church in Macon, Georgia is capitalizing on the hype surrounding the Netflix thriller Bird Box. The film stars Sandra Bullock as a mother-of-2 who battles an unknown force to save the lives of her children.

END_OF_DOCUMENT_TOKEN_TO_BE_REPLACED

A Tallahassee pastor humbled himself before his flock in his first sermon after he was caught sleeping with another man's wife earlier this month.

END_OF_DOCUMENT_TOKEN_TO_BE_REPLACED

Bishop Eddie Long posted a video on his Facebook.com page addressing his congregation's concerns over his dramatic weight loss.

Rumors ran wild Monday on social media that the 63-year-old pastor was terminally ill from an incurable disease.

END_OF_DOCUMENT_TOKEN_TO_BE_REPLACED

Rev. Bill Owens, president of the Coalition of African-American Pastors (CAAP), said Obama's comparison of sexually confused individuals with black civil rights was a “gross insult” to all who fought for equality for African-Americans.

END_OF_DOCUMENT_TOKEN_TO_BE_REPLACED

Over 100 black pastors attended Donald Trump's meeting today as planned. According to the left wing media, Trump's planned meeting with the black pastors was canceled after the pastors withdrew their support.

After the meeting at his Trump Tower in New York, Trump met with reporters and talked about the love that was in the room.

END_OF_DOCUMENT_TOKEN_TO_BE_REPLACED

In a statement on Friday, Trump's camp said he planned to meet with 100 influential black religious leaders. The statement said the pastors would announce their ringing endorsement of Trump after the meeting.

But plans took an unexpected turn shortly after the press release.

END_OF_DOCUMENT_TOKEN_TO_BE_REPLACED

Normally I don't get up early on the weekends for any man. But the chance to see the next president of the United States in the flesh doesn't come along every day!