New York City Mayor Bill de Blasio said he was unaware about the arrest of his only daughter, Chiara de Blasio, until a reporter notified him.

Chiara de Blasio, 25, was among hundreds of protesters arrested over the weekend for "unlawful assembly" and blocking traffic at the intersection of East 12th Street and Broadway.

Chiara's name was released by a police union known for its hostility toward the mayor.

Within minutes, Chiara's booking info was reposted on other forums and social media accounts.

Mayor de Blasio was understandably upset that his daughter's name was the only arrestee leaked by the police union.

The booking information, which Sandrarose.com viewed, contained personal information, including her height, weight, and "curly/wavy" hairstyle. Her physical condition was described as "apparently normal."

Chiara opened up about her battle with depression and drug addiction in 2014. She received an award for speaking out about her mental illness from then-Human Services Secretary Kathleen Sebelius.

Mayor de Blasio and his wife Chirlane McCray also have a son, Dante, 22. 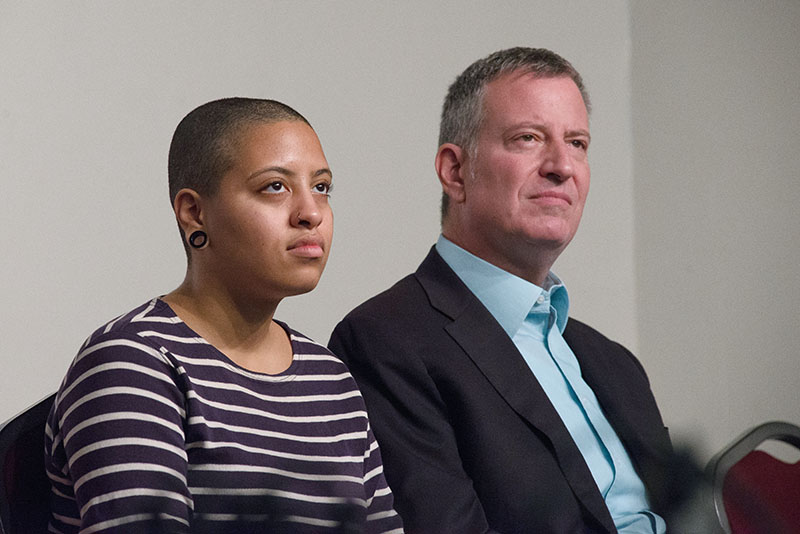 Floyd is a Black man who was killed by a former Minneapolis police officer on May 25. The officer, Derek Chauvin, was arrested Friday and charged with Floyd's murder.

Chiara, 25, was arrested for "unlawful assembly" and blocking traffic at the intersection of East 12th Street and Broadway.

Chiara was arrested when she refused to move, a law enforcement source told Fox News.

About an hour after Chiara was taken into custody, her father, the mayor, held a hasty press conference, telling protesters "it's time to go home."

"If you went out peacefully to make a point about the need for change, you have been heard and change is coming in the city," de Blasio said. "I have no doubt about that. It’s time to go home so we can all move forward."

Mayor de Blasio suggested his daughter was misled by an anarchist group of anti-fascists who weren't protesting George Floyd's death.

The NYPD made at least 345 arrests during Saturday night's protests. 33 officers were injured and dozens of police vehicles were torched by protesters.