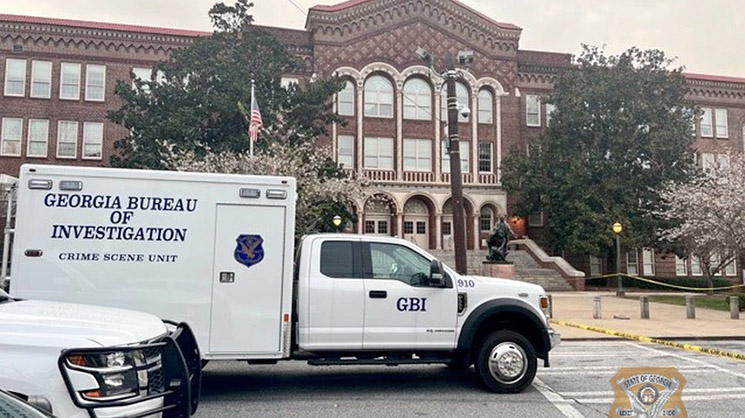 An Atlanta woman who was shot by police outside a SW Atlanta high school was arrested and booked into the Fulton County Jail.

Police say Tierra Vachon, 30, began fighting with multiple parents outside Booker T. Washington High School on Wednesday. The fracas started with fisticuffs between students who called their parents to jump in.

Police arrived to find Vachon waving a handgun in the direction of students and staff, according to Atlanta Journal-Constitution.

An APS officer shot Vachon after she refused to comply with orders to drop the gun.

The Georgia Bureau of Investigation said Vachon was shot in the hand and treated and released from Grady Memorial Hospital. She was booked into the Fulton County Jail and charged with obstruction, carrying a weapon on school property and disrupting public school, according to online jail records.

Violent incidents in public schools have spiked since the pandemic. According to statistics, student suspensions and expulsions have doubled since 2020.

New developments in the Tamla Horsford cold case prompted the Forsyth County Sheriff's Office to ask the Georgia Bureau of Investigation to reopen the case.

New evidence suggests Horsford fought for her life before she was thrown off a balcony following an "adult slumber party" in Forsyth County, GA.

Her neck was broken and her heart was lacerated, causing her to bleed out in the backyard.

The medical examiner and Georgia Bureau of Investigation ruled the cause of death was multiple blunt force trauma from "an accidental fall" from a 2nd floor residential deck, and the case was closed in 2019.

In a letter to Horsford's widow, Leander, attorney Ralph E. Fernandez said he recently "finished the exhaustive review of the records related to the investigation."

"The review reflects that a homicide is a strong possibility." He went on to say "Witness statements are in conflict" and "A potential subject handled the body as well as the evidence prior to the law enforcement arrival."

He added: "A remarkable fact is that there were no photographs taken during the autopsy of Tamla's body This had been done at someone's directive because such a practice is unheard of."

In a letter to GBI Director Vic Reynolds, Forsyth County Sheriff Ron Freeman asked the GBI to "assume and open" an investigation into the "tragic death of Tamla Horsford."

The autopsy report and other documents pertaining to Horsford's death were released to the public by the Forsyth County Sheriff's Office in 2019 after the case was closed.

The detailed autopsy report, published by Forsythnews.com, describe a fractured cervical vertebra in her neck, bleeding on the brain, and multiple lacerations and abrasions to her face, head, neck, torso and extremities. Her right wrist was dislocated and a 1-inch laceration was observed on her wrist.

The report also described a "3/4 inch linear laceration to the right ventricle" of her heart, meaning a tear in the wall of her heart. That injury alone would have been fatal.

The GBI toxicology report shows Horsford had a blood alcohol level nearly three times the legal limit and she had THC (marijuana) and Xanax in her system. But her family said she did not smoke marijuana nor was she prescribed Xanax by a doctor.

The Georgia Bureau of Investigations is still searching for the car 19-year-old Vanita Richardson and 31-year-old Truvenia Campbell were riding in hours before they were killed and thrown off a bridge in northwest Georgia.

The GBI is asking for the public's help to locate Richardson's 1997 gold Toyota Corolla with Georgia tag: RTJ 6295.

A road crew discovered the bodies early Wednesday, May 13, on the banks of the Etowah River under the east bypass bridge in Floyd County.

The woman had plastic bags over their heads and their clothes were torn. Investigators believe the killer misjudged the water's edge because it was still dark out when the bodies were dumped.

Police believe there are 2 killers. Assistant Special Agent-in-Charge Brian Johnston says the GBI is working around the clock to develop and follow leads in the case.

Johnston told Channel 2 anchor Justin Wilfon that agents believe the two women knew their killer or killers and it wasn't a random act of violence.

Family and friends attended a vigil on Monday night. Richardson and Campbell were half sisters. They shared the same father and different mothers.

The stepsisters were always together -- inseparable. Truvenia Campbell had epilepsy since birth. Richardson kept a close eye on her.

"They were very, very close. Very, very close," said Campbell's mother, Donna Campbell. She pleaded with mourners to space themselves 6 feet apart at the vigil outside Campbell's home in Rome.

The sisters were last seen on Tuesday night, May 12. Richardson left her home, presumably to go pick up Campbell for a night out.

The coronavirus restriction had been lifted by Georgia Gov. Brian Kemp, and residents were cautiously venturing outside after being cooped up inside their homes for 2 months.

Richardson was set to graduate from high school on Saturday, May 23.

Before she left, Richardson's mother, Vanita Allen, called out to her. "She pulled out of the yard and I said, 'You better make it back in tonight.'"

Two women who were killed and dumped off a north Georgia bridge were stepsisters, according to the Georgia Bureau of Investigation.

Vanita Nicole Richardson, 19, and 31-year-old Truvenia Clarece Campbell, aka Bean, were found Wednesday morning under the Etowah Bridge near Rome, a city northwest of Atlanta.

GBI Assistant Special Agent In Charge Brian Johnston told the Rome News-Tribune the women were "apparently dropped over the bridge".

A Georgia Department of Transportation crew doing routine maintenance on the bridge discovered the two bodies on dry land near the south bank of the Etowah River around 11 a.m.

The GBI told reporters the deaths are being investigated as homicides. No cause of death was given.

News of the brutal murders shocked the small community in Floyd County. Campbell was well known in Rome, a relative told a reporter.

The GBI released an image of a car similar to the gold 1997 Toyota Corolla registered in Richardson's name. The two women were together in the Corolla the night before their bodies were found. The car has a Georgia license plate: RTJ 6295. Investigators believe the Corolla is somewhere in the Metro Atlanta area.

Richardson was set to graduate from Armuchee High School on Saturday, May 16.

"Vanita will be remembered for being a fun-loving, humble, and motivated student who was making strong plans for her future," a Floyd County Schools spokesperson tweeted on Thursday.

"Even throughout the school closures, Vanita's passing is felt by all. In particular, the staff members whose lives she touched with her caring personality and big heart."

The spokesperson said the school social worker and counselor are available to students via email for virtual grief counseling, according to 11 Alive News.

The mystery is solved: Authorities tracked down the person who left a suspicious note at the memorial site for Ahmaud Arbery, the 25-year-old Black man who was gunned down by two white men in Brunswick, Georgia on Feb. 23.

The note, which was left near the spot where Arbery was killed, read: "I am so sorry. I should have stopped them. I am so sorry."

The note sparked conspiracy theories about a 4th person being at the scene when Arbery was shot by Travis McMichael during a struggle after Arbery reached for McMichael's shotgun.

S. Lee Merritt, the Georgia attorney who is representing Arbery's mother, tweeted, "We need to discover who left this note!"

The Georgia Bureau of Investigation tracked down the note author and determined the person just wanted to leave their condolences to the family.

The GBI announced the person was "expressing their condolences for Arbery's death."

Travis, 34, and his father, retired police detective Gregory McMichael, 64, are being held without bond while awaiting trial on murder and aggravated assault charges.

Dr. Keith Walters, 44, was charged with three counts of obscene Internet contact with a child and one count of sexual exploitation of children using a computer device to seduce, entice or solicit a child.

Walters was placed on administrative leave and stripped of his title as Dean of the College of Science and Mathematics, the Valodosta Daily Times reported.

Walters and 13 other men were arrested on Feb. 6 and February 9 as part of Operation Broken Arrow, a joint operation between 18 law enforcement agencies, including the Georgia Bureau of Investigation (GBI).

The operation targeted men in chat rooms and other online websites. Lindsay Marchant, assistant special agent for the GBI, said "Every individual arrested during the operation believed they were going to a location to meet with a child and engage in prearranged sex acts."

END_OF_DOCUMENT_TOKEN_TO_BE_REPLACED

A Jonesboro woman is being held in the Clayton County jail without bond for prostituting 2 teenage girls, the Atlanta Journal-Constitution reports.

Police say the Jessica M. Washington, 27, gave two teenage runaways free room and board in her apartment on Upper Riverdale Road, in exchange for letting her pimp them out on Craigslist.com.

Washington is being charged with "prostitution, keeping a place of prostitution, trafficking persons for labor or servitude, pandering and enticing minors for indecent purposes, according to Clayton County court records," obtained by the Atlanta Journal-Constitution.

END_OF_DOCUMENT_TOKEN_TO_BE_REPLACED

Two of the three people found dead in a car alongside the highway in South Fulton County have been identified as a man and a woman from Montgomery, Alabama.

The officer saw the bodies of 2 deceased males in the back seat of the car. He later looked in the trunk and found the body of a female.