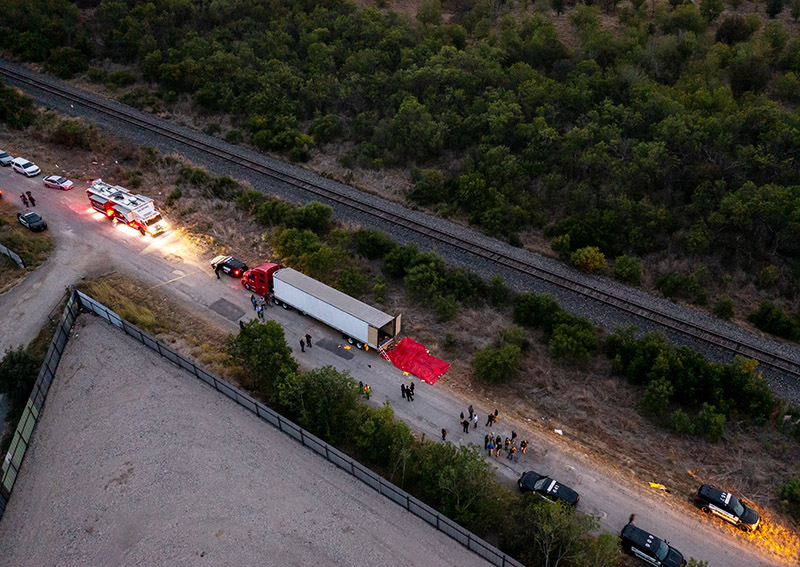 San Antonio Fire Chief Charles Hood said a 911 caller at a nearby building "heard a cry for help" and "came out to investigate."

Upon approaching the truck, he saw the door was "partially open" and looked inside and discovered the bodies stacked on top of each other.

Multiple police, fire trucks and ambulances responded to the scene at the 9600 block of Quintana Road on Monday. They found one body in the roadway and 45 bodies inside the truck.

Temperatures in the San Antonio area hit 103-degrees on Monday.

Chief Hood said 16 immigrants (12 adults and four children) were rushed to nearby hospitals. Their conditions were not disclosed, but they are expected to survive.

"The patients that we saw were hot to the touch," Chief Hood said of the victims. "They were suffering from exhaustion, no signs of water in the vehicle." There was also no working air conditioning unit on the vehicle. We're not supposed to open up a truck and see stacks of bodies in there. None of us come to work imagining that."

A trucking company owner in Houston said the death truck was "cloned" to look like one of his semi tractor trailers.

Felipe Betancourt Sr. and his son, Felipe Jr. told the Houston Chronicle the cloned truck had the same color and identifying numbers from the federal Department of Transportation and the Texas DOT.

"Ours is sitting right here," Felipe Jr. told the outlet by phone. "My truck doesn't have a window on the side like the one in San Antonio."

Chief William P. McManus said in a live press conference via Facebook on Monday that three human smugglers are now in custody; however, it's not clear if they're "absolutely connected" to the deaths.

"This is nothing short of a horrific tragedy," he said. "Our job is not to ask why. Our job is to ask how we can help. That's why you're seeing medical assistance. As far as the federal investigation goes, that's in the hands of the feds. I'm sure there will be more questions and hopefully some answers as we move forward."