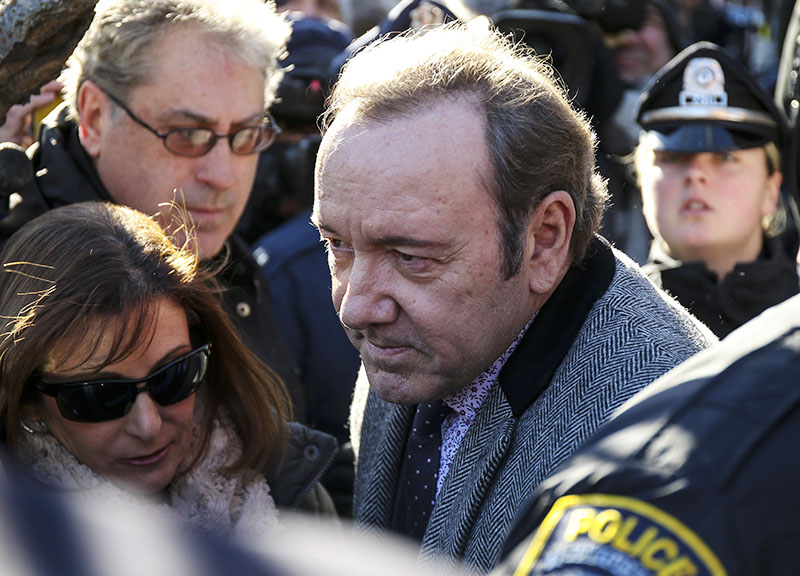 Behn, who was previously married to Norwegian princess Martha Louise, accused Spacey, 60, of reaching under a table and grabbing his genitals twice at a Nobel Prize concert in 2007. Behn would have been around 35 at the time of the alleged incident.

"I have a little #MeToo story about Kevin Spacey," Behn said in late 2017.

"We were having a nice chat where we spoke about theater and drama... After minutes, he said 'Hey, let's go out and have a cigarette,' then he grabbed me under the table right in the balls."

The news of Behn's death comes after Spacey posted a bizarre Christmas video on YouTube.

In the video, Spacey sits by a roaring fire while wearing a holiday sweater.

Speaking in the voice of his House of Cards character, Spacey said, "You didn't really think I was going to miss the opportunity to wish you a merry Christmas, did you? It's been a pretty good year and I'm grateful to have my health back and in light of that I've made some changes in my life and I'd like to invite you to join me."

"The next time someone does something you don't like you can go on the attack but you can also hold your fire and do the unexpected, you can kill them with kindness.”

Behn's death marks the third passing of a person who accused Spacey of sexual assault.

Earlier this year, Linda Culkin, a nurse who accused Spacey of sexual battery against one of her patients, was hit by a car as she crossed an intersection.

Police said Culkin crossed while the light was green. The driver swerved to avoid her and hit another car head on. Both drivers were not seriously injured. Police did not file charges.

Months later, a middle-aged massage therapist who accused Spacey of sex assault when the man was a teenager died by suicide.

The man's attorney asked Spacey to give the family 90 days to grieve and to "substitute his estate," but Spacey filed a notice of death in court the next day.

On Nov. 8, 2017, former Boston news anchor Heather Unruh held a press conference in Boston, during which she tearfully accused Spacey of allegedly groping her then-18-year-old son. The incident allegedly occurred in July 2016 at the Club Carr restaurant on Nantucket Island.

The teenager said he texted his girlfriend while Spacey groped him. But Spacey's attorneys spent months trying to obtain the cell phone and copies of the text messages. A lawyer for the teen told prosecutors the phone was missing.

When Unruh turned over the cell phone to police in 2017, she admitted she deleted some of the text messages. On June 26, 2019, her son filed a lawsuit against Spacey, claiming emotional damages.

The lawsuit was dropped two weeks later "with prejudice", meaning it can't be filed again.

Since being accused of sex abuse, Spacey's movie projects have been canceled and his bookings have dried up.

END_OF_DOCUMENT_TOKEN_TO_BE_REPLACED

Netflix has cancelled its web series House of Cards after star Kevin Spacey apologized to actor Anthony Rapp for molesting him 31 years ago.

END_OF_DOCUMENT_TOKEN_TO_BE_REPLACED

The LGBT community is furious with actor Kevin Spacey for the way he came out of the closet on Sunday.

END_OF_DOCUMENT_TOKEN_TO_BE_REPLACED

Welp, it didn't take long for the liberal news media to spin Kevin Spacey's deviant behavior into an emotional coming out story.

END_OF_DOCUMENT_TOKEN_TO_BE_REPLACED

The Harvey Weinstein scandal has blown the lid off of Hollywood's shameful pedophile problem.