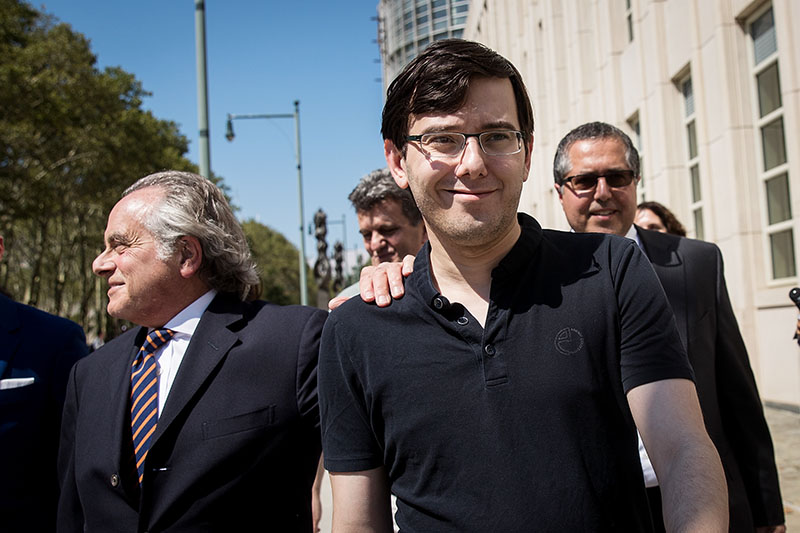 Martin Shkreli is a free man. Shkreli walked out of prison a free man on Wednesday, May 18, and into a halfway house where he will be on home confinement until September 14.

A friend picked Shkreli up from prison in Pennsylvania on Wednesday.

"Picked up this guy hitchhiking. Says he's famous," he tweeted.

The so-called "Pharma Bro" was once the most hated man in America.

Shkreli got the attention of the Federal Trade Commission (FTC) when he hiked the price of a life-saving AIDS drug by 5,000%.

After a federal investigation into his former company in 2017, Shkreli was sentenced to serve 7 years in prison for securities fraud.

A judge revoked his $5 million bond when he threatened Hillary Clinton while appealing his conviction.

While in prison, Shkreli agreed to pay $40 million to consumers to settle the price gouging allegations.

He was also ordered to pay $64.6 million he earned in profit from the price hike. And he is banned from ever working in the pharmaceutical industry again.

Jailed pharmacy exec Martin Shkreli, 34, managed to come out as transgender and issue a complaint against his fellow inmates in a single Facebook post that was quickly snatched down on Wednesday.

END_OF_DOCUMENT_TOKEN_TO_BE_REPLACED

Former pharmaceutical exec Martin Shkreli sold his rare $2 million Wu-Tang Clan album at a $1 million loss. But according to Bloomberg.com, the one-off CD may not even be an official Wu-Tang album.

END_OF_DOCUMENT_TOKEN_TO_BE_REPLACED

Wall Street wiz kid Martin Shkreli was busted by the feds on Thursday and charged with running a Ponzi scheme and other fraud charges.

Shkreli, 32, is best known (and hated) for boosting the price of an AIDS drug 5000% to $750 per pill after acquiring a small pharmaceutical company and its patents.

Shkreli also made the news recently for his winning bid of $2 million for hip hop group Wu Tang Clan's album Once Upon a Time in Shaolin. Only one copy of the album was ever made.

END_OF_DOCUMENT_TOKEN_TO_BE_REPLACED

Poor Martin Shkreli. Yesterday he was on top of the world, enjoying his ill-gotten gains from gouging AIDS patients for hundreds of dollars per pill and spending millions on a one-off Wu Tang Clan rap record.

Now he is trading in his tailored suits and loafers for an orange jumpsuit.