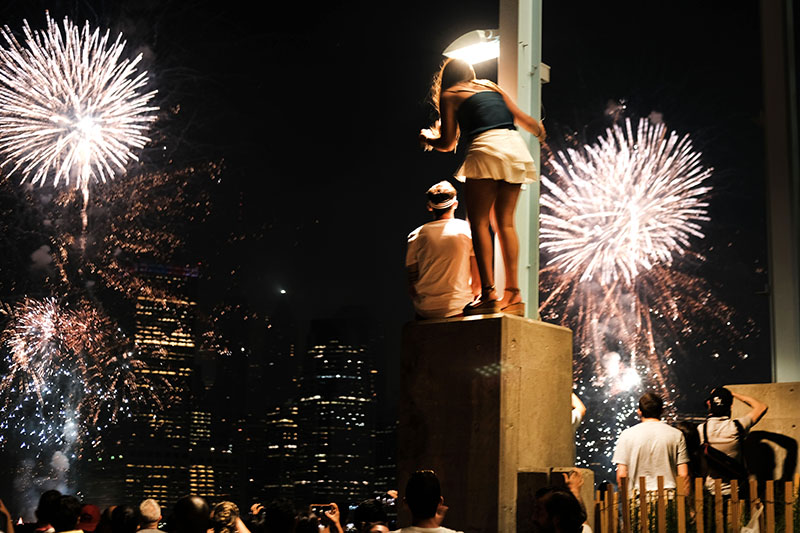 Nightly fireworks and loud explosions have kept many residents awake until early morning hours around the country.

Residents have taken to Twitter.com to complain about the nightly fireworks displays that continue nightly since May.

"It's always like 9, 10 p.m., and at first we didn't know what it was," said Marquita Spraggans. Many thought the loud sounds were protesters blowing up ATM machines.

Philadelphia residents aren't the only ones losing sleep over the loud booms that sometimes shake their houses.

"We've been hearing them every night in San Francisco," tweeted @nina_lacour.

According to NBC New York, nightly fireworks are a nuisance that start at sundown and continue into the early morning.

The fireworks are set off on street corners and rooftops. The city's noise complaint hotline fielded 1,700 fireworks complaints through the first half of June, including 455 complaints just on Sunday.

I know this is small in the scheme of everything going on, but my dog is at this point sleeping either behind the laundry basket or in the bathroom. Constant fireworks. Why?

Twitter users all over the country complain about the mysterious fireworks displays. Residents are determined to find out the source of the fireworks that awaken their children and frighten their dogs.

I'm deadass confused why every night there are fireworks. Is this the government? Am I tripping?

No. It’s these guys with nothin else to do lol. Every night in Harlem..right in front of my building... pic.twitter.com/1tYqB1YLAl

omg! I was wondering what those were! I can hear them in East Harlem, it's crazy. I've also started hearing an air horn going off during the day, any idea what that's about?

I could see this being deliberate as a way to keep people on edge or sleep deprived in the hopes that would deter people from protesting. Seems like a war tactic tbh ??

Same here, MEMPHISTN - for about 2 weeks now in different parts of the city. The BIG ones.

Same in Somerville, MA. Every night for at least three weeks. Maybe even longer.

Here in Richmond, protesters are doing it.

The rapper known as Gucci Mane La Flare is alive and well. He said so himself.

At least we think it's him.

Many believe the real Gucci is dead and the new and improved Gucci Mane is a human clone.

END_OF_DOCUMENT_TOKEN_TO_BE_REPLACED

The mummified remains of Manfred Fritz Bajorat, 59, was found on board a yacht that was adrift at sea "for years".

The mummified body was found slumped in a sitting position at the controls of a radio and navigation desk inside the cabin.

END_OF_DOCUMENT_TOKEN_TO_BE_REPLACED

The New York Police Department has a baffling mystery on its hands. Someone scaled the Brooklyn bridge last night or early this morning and raised 2 gigantic white flags where American flags usually fly. Police are trying to figure out if the white flags were put there by terrorists or pranksters -- and how they managed to bypass the bridge's tight security.

END_OF_DOCUMENT_TOKEN_TO_BE_REPLACED

A mysterious object that washed up on a beach in the Maldives Islands could be a fire extinguisher bottle from the missing Malaysia Airlines plane.

The object, which police described as a naval sea mine, washed up on the beach near Baarah on Monday, Islanders tell Haveeruh.com.

But some are speculating that the object is a Halon extinguisher bottle like the type used in aircraft cargo holds to extinguish fires.

END_OF_DOCUMENT_TOKEN_TO_BE_REPLACED

A Facebook post that purported to be a reproduction of an old Malaysia Airlines ad went viral on social media websites over the weekend. The ad shows a Malaysia Airlines plane along with the advertising copy, "OUR NEW BOEING 777 - LOSE YOURSELF ON A JOURNEY OF EPIC PROPORTIONS." According to Urban Legends, the ad is a hoax. But did we really need Urban Legends to tell us that?

END_OF_DOCUMENT_TOKEN_TO_BE_REPLACED

A mysterious sea creature has washed up onshore in Villaricos, Spain, leaving everyone scratching their heads. A woman found the decomposing carcass on the beach early Thursday, according to a report on ThinkSpain.com.

“A lady found one part and we helped her retrieve the rest,” said Maria Sanches of Civil Protection in Cuevas. “We have no idea what it was. It really stank.” The carcass sprouts shattered bones (which some mistook for horns) on one end and is about 13 feet long.

Photos of the "sea monster" are going viral on social networks and making headlines all over the world. Some speculate humorously that the creature is a distant relative to the Loch Ness Monster.

END_OF_DOCUMENT_TOKEN_TO_BE_REPLACED

Police in Louisiana believe they have found the body of missing teacher, Terrilynn Monette.

Monette's black Honda was found by a diver submerged in a Louisiana bayou, CNN reports.

Monette, 26, was last seen leaving Parlay's Dream Lounge in New Orleans on March 2, after celebrating her nomination for a "Teacher of the Year" award with friends.

The diver continued to look for Monette's car in waterways long after police called off their search in March, Detective Daniel Seuzeneau of the Slidell Police Department, told CNN.

Monette's mother, Toni Enclade, told CNN that police informed her that her daughter's car was found with a decomposed body in the driver's seat.

"To know that she could have possibly been there for three months," she said, overcome with emotion.