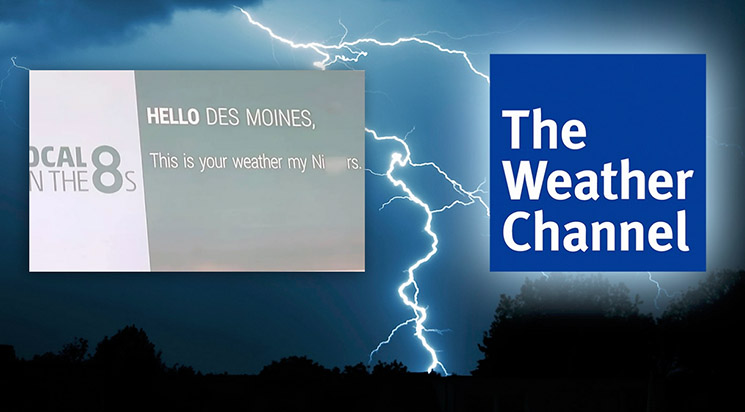 An Iowa weather station has apologized after a racial slur was aired during a local Weather Channel TV broadcast.

The graphic containing the n-word went viral on Twitter after it "accidentally" aired during the Des Moines-based Weather Channel's "Local on the 8s" segment Thursday.

"I've blurred it, but I'm pretty sure you can figure out what it said," tweeted journalist Matthew Keys.

The graphic read: "Hello Des Moines, This is your weather my N----s."

The Weather Channel confirms this graphic accidentally made it on air in the Des Moines market on Thursday during a "Locals on the 8s" segment. I've blurred it, but I'm pretty sure you can figure out what it said. pic.twitter.com/hDVcomawGp

"This did not originate with us, and we are in the process of investigating it further," a spokesperson for the Weather Channel said.

It likely originated at the cable head-end, according to a source, though the network is still trying to figure it out.

The reaction was swift on Twitter. However, the Weather Channel denies that the racial slur originated with the station.

"This did not originate with us, and we are in the process of investigating it further," a spokesperson told Keys, in a tweet.

One television news expert backed up Matthews that the mistake originated with TWC.

"TWC has computer units at cable headends to produce the local on the 8s, and a rogue cable employee must've messed with the files and caused it to say that," wrote one Twitter user.

TWC has since deleted the slur and apologized for the incident on Facebook.

"A graphic during the Weather Channel cable network's 'Local on the 8s' presentation in Des Moines last evening included a racial slur," the post read. "We removed this graphic as soon as we learned of it. This did not originate with us, and we are in the process of investigating it further. We apologize to our viewers."

Remember when CNN anchor Anderson Cooper made a fool of himself by standing in "flood waters" up to his waist during Hurricane Ike in 2008? A bystander snapped photos of Cooper's crew standing in a couple of inches of water - and a viral meme was born.

On Sunday, Jim Cantore, a meteorologist for The Weather Channel, went viral while covering Hurricane Ida as it slammed into Louisiana with 150 mph winds.

Cantore leaned into "heavy winds" and appeared to stumble and lose his balance several times during his live remote.

As he dramatically braced himself against the hurricane force winds, a guy cartwheeled behind him.

Jim Cantore in a helmet & a guy doing a cartwheel.
Weird times. pic.twitter.com/XjRrUuvon4

"Jim and the weather channel has turned storms to sensationalism for their network in the last 10 years.."

Another user tweeted: "this is why people don't trust the weathermen."

And a third person wrote: "Jim is the dr. Fauci of weather."

In more serious news, Hurricane Ida left a path of destruction along the Gulf Coast. More than 1 million residents are out of power in New Orleans after Hurricane Ida made landfall Sunday night.

Ida knocked out power in Louisiana and Mississippi and, according to estimates, the power could be out for 6 weeks or more.

High winds and flooding destroyed multiple buildings. A 60-year-old man was reportedly killed when a building collapsed on him.

Hurricane Ida was quickly downgraded to a tropical storm over southwestern Mississippi by Monday morning.

About 95% of oil and gas production in the Gulf Coast was shut down and gas prices are expected to rise in the area.

If you want to donate to recovery efforts, New Orleans officials recommend donating to United Way of Southeast Louisiana and The Greater New Orleans Foundation.

The American Red Cross said they have opened dozens of shelters across the state.

You can donate to the Red Cross here.