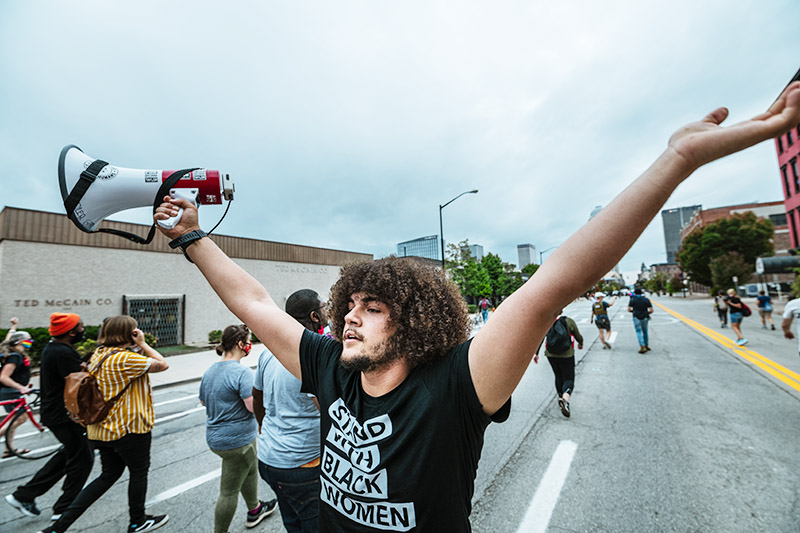 A Black Lives Matter activist who led protests calling for justice for Breonna Taylor was, ironically, shot and killed during a carjacking, his mother confirmed.

Hamza "Travis" Nagdy, 21, was shot and killed during a carjacking near the University of Louisville campus before 12:30 a.m. on Monday, Nov. 23, Louisville police say.

In her Facebook post, Nagdy's mother, Christine Muimneach, said that her "Beautiful and intelligent son" had been killed in a carjacking.

About 100 mourners attended a candlelight vigil for Nagdy in Jefferson Square Park on Monday night.

Nagdy led protests for Taylor with his familiar red and white megaphone, calling for police reform and to defund the police.

Taylor was shot and killed by police during a botched raid in March.

Taylor's mother, Tamika Palmer, who reached a multimillion dollar settlement with the city, paid tribute to Nagdy on Facebook.

"It's somethings I will never understand it's also somethings, I know I'm not suppose to question but I need clarity about 2020," she wrote. "RIP Travis you were amazing and I was honored to have you standing for Bre... Another beautiful soul lost as we continue to fight for justice!!"

State Rep. Charles Booker, a Democrat, tweeted: "We've suffered a great loss. Travis Nagdy, a young leader committed to the fight for justice, is gone. As we marched for Breonna Taylor, it was often Travis and his megaphone leading the way. A bullet took his breath, but we still hear his voice. Rest in Power, young Brother."