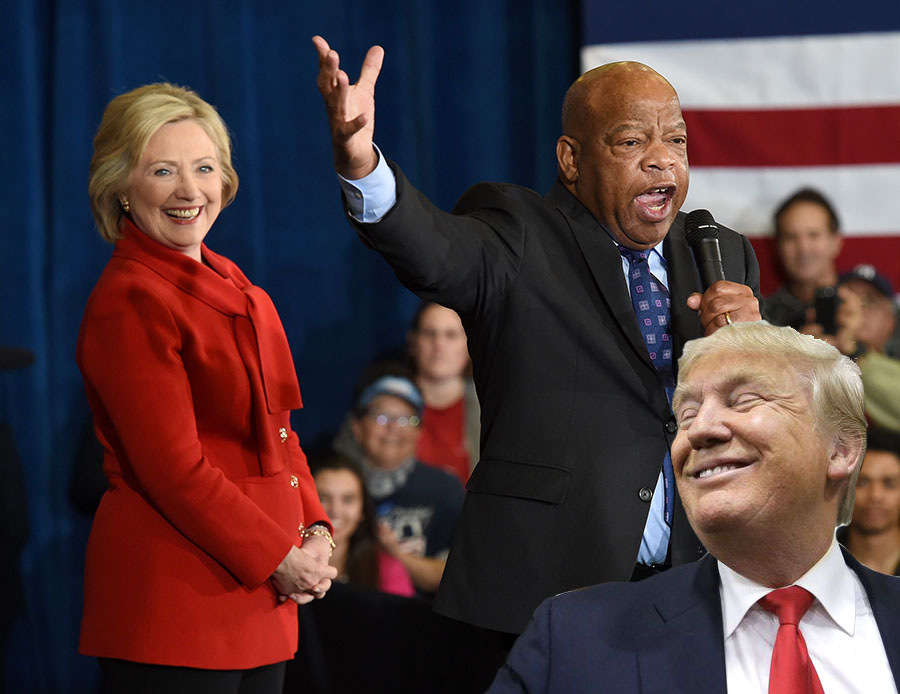 Mr. Lewis unwittingly provoked Trump during an appearance on NBC's Meet the Press on Saturday, when he said he would skip Trump's inauguration because he didn't see the PEOTUS as a "legitimate president".

"I think it was a conspiracy on part of the Russians and others to help him get elected," he told MSNBC.

Predictably, the 70-year-old president-elect came out swinging on Twitter.com.

"Congressman John Lewis should spend more time on fixing and helping his district, which is in horrible shape and falling apart (not to mention crime infested) rather than falsely complaining about the election results," he tweeted.

Trump added that Mr. Lewis was "All talk, talk, talk — no action or results. Sad!"

Lewis's 5th Congressional district --  which covers most of Atlanta, Buckhead and parts of the Westside, Decatur and Clayton County -- ranks among the highest in the nation in violent crimes, poverty and unemployment.

But others say Trump went too far by smearing the civil rights legacy of a living legend.

Mr. Lewis was one of the architects of the March on Washington in August 1963. And he was beaten so badly during the march from Selma to Montgomery, Alabama in 1965 that his skull was fractured.

"That PEOTUS Trump would attack Congressman Lewis on MLK Day weekend for ‘all talk… no action’ when he bled to actually “Make America Great” is why far less than half the country supports him at the dawn of his presidency."

But some Republicans sided with Trump.

"Regardless of whether you're on the right or the left, you ought to respect the election. That's what I did in 2008 when Obama was elected," said Georgia Senator Josh McKoon. "Sure, I was disappointed in the outcome," he continued, "but I respected it and moved on to the next fight. That's why it's really disappointing to me to see Lewis, who has this enormous legacy, say he was not going to attend the inauguration."

At least 20 Democrats plan to skip the inauguration celebrations in Washington D.C. on Jan. 20.