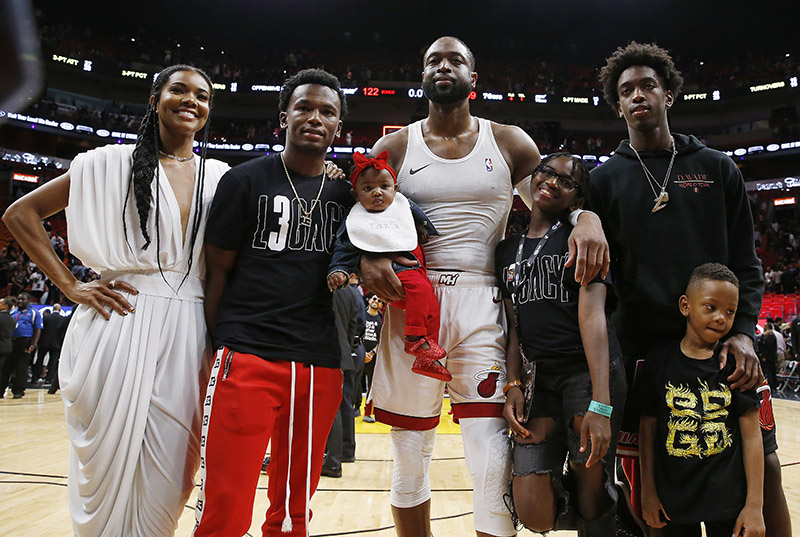 At Wade’s final home game against the Philadelphia 76ers at Miami’s American Airlines Arena on Tuesday, he posed for a family portrait with his wife, Gabrielle Union, his nephew, Dahveon Morris, and children, Kaavia James Union Wade, Zion Wade, 11, Zaire Wade, 17, and Xavier Wade, 5, whom Wade fathered with a fan in California. 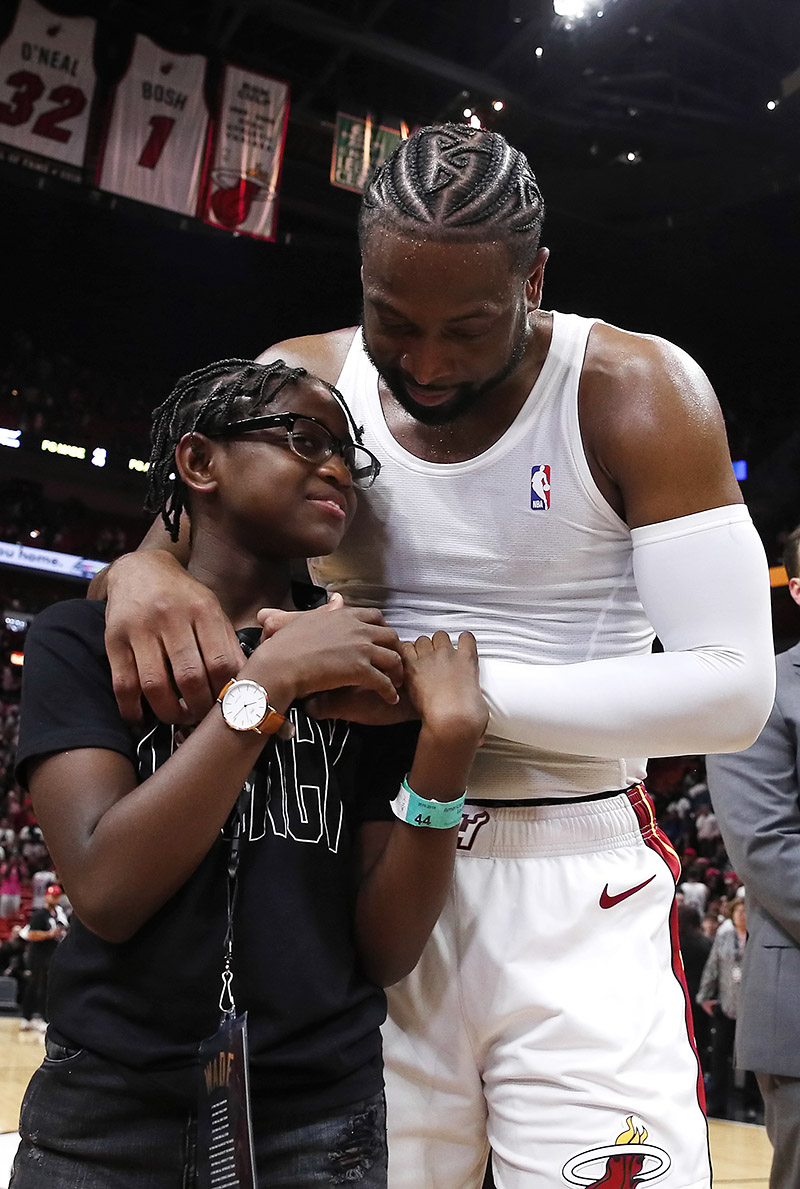 Wade shared a tender moment with his son Zion, who came out as homosexual during the Miami Gay Pride parade last weekend. Wade and Zion’s mother, Siohvaughn Funches, divorced the year he was born.

There wasn’t a dry eye in the house when Wade closed out his stellar career with a triple-double in the Heat’s 113-94 loss to the Nets. 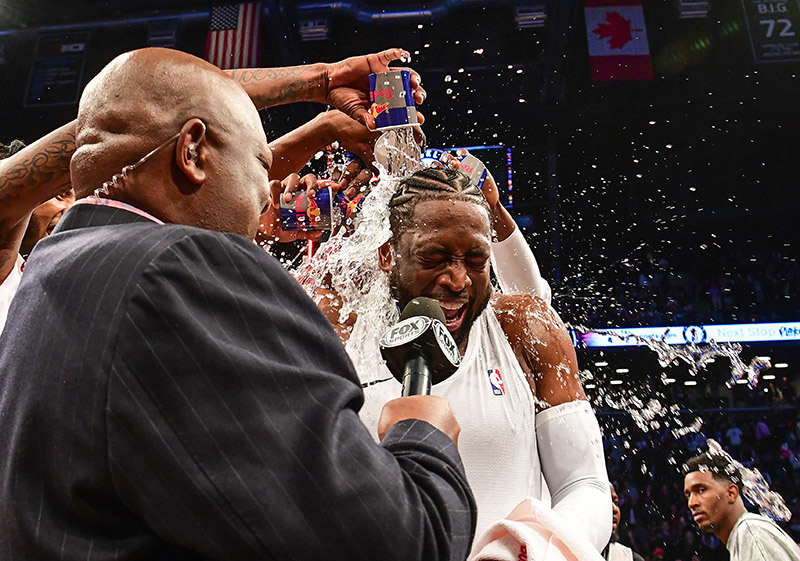 Teammates dumped water on Wade after he showed out for the Heat with 25 points, 11 rebounds and 10 assists in the final game in his 16 year career. 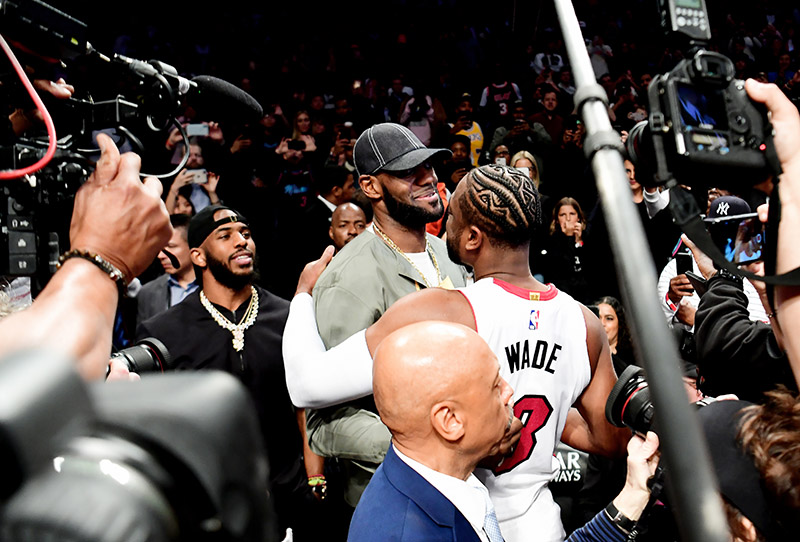 Wade’s close friends Chris Paul, left, and LeBron James, center, cheered him on from their courtside seats. James, 34, who plays for the hapless L.A. Lakers, will not advance to the NBA playoffs for the first time in 14 years.

Wade, 37, was happy to see his “Banana Boat Crew” supporting him at courtside. “Obviously it means a lot,” said Wade of James and Paul after the game. The pals often vacation together with their wives at the end of previous post-seasons.

“They know that I will always be there for them, especially in a moment like this. No matter what I’m doing, I will be there for their last game, It was cool to see those guys over there. I’m glad they came, but at the same time I wish they weren’t here because the whole time they kept telling me to shoot, shoot, shoot. But it was great. We’ve got a brotherhood. Those are my brothers.”

Budweiser commemorated Wade’s final season with a commercial that featured Wade exchanging his jerseys with people he inspired. The commercial includes the sister of a Parkland school shooting victim, Joaquin Oliver, and a woman whose college tuition was paid by Wade. In exchange for his jersey, she gave him her cap and gown.

Wade’s mother also appears in the commercial. She became the pastor of the church that Wade bought for her. Their journey was not always a smooth one. Wade’s mother kicked him out of her house when he was a teenager. The mother of his future wife, Siohvaughn Funches, took him in.

After the game, Wade joined his wife, Gabrielle Union, and their friends at his “One Last Dance” retirement party held at Catch NYC on Wednesday night in New York City. The guest list included power couples La La Anthony, 39, and Carmelo Anthony, 34, and Justin Timberlake, 38, and Jessica Biel, 37 (not pictured).

WIKILEAK’S FOUNDER JULIAN ASSANGE DRAGGED OUT OF EMBASSY IN HANDCUFFS 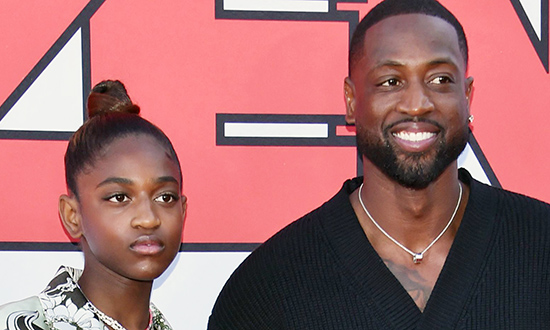