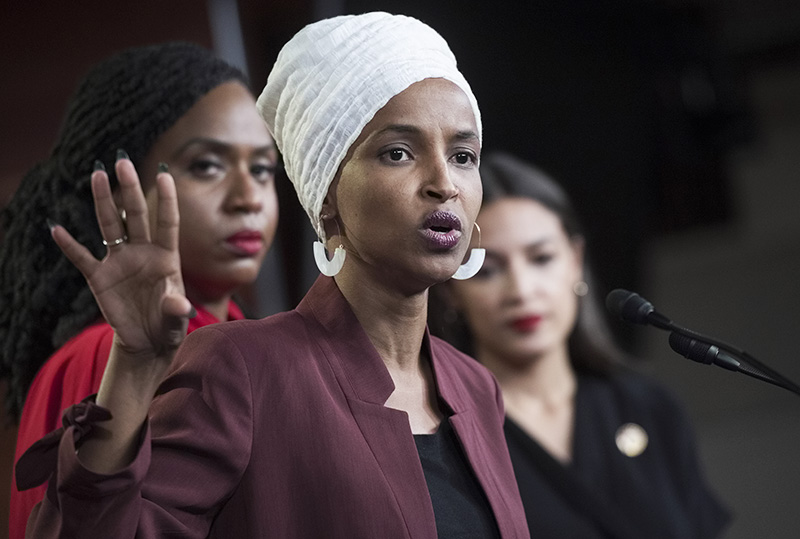 Reps. Ayanna Pressley, Ilhan Omar, Rashida Tlaib (not pictured) and Alexandria Ocasio-Cortez, who call themselves “the Squad”, conducted a news conference in the Capitol Visitor Center on Monday to respond to comments tweeted by President Donald Trump.

Trump’s tweets were directed toward the freshman House Democrats who are engaged in battle with Speaker Nancy Pelosi and the older establishment Democrats in the House of Representatives.

Trump took Pelosi’s side in the battle that has waged for months between Pelosi and the Squad, who don’t hide their disdain for her or Trump.

In one tweet that sparked a firestorm of controversy, Trump told Ilhan Omar (D-MN) to go back to Africa and fix the problems there if she hates America.

“We will never be a Socialist or Communist Country,” Trump tweeted. “IF YOU ARE NOT HAPPY HERE, YOU CAN LEAVE! It is your choice, and your choice alone. This is about love for America. Certain people HATE our Country….”

We will never be a Socialist or Communist Country. IF YOU ARE NOT HAPPY HERE, YOU CAN LEAVE! It is your choice, and your choice alone. This is about love for America. Certain people HATE our Country….

Trump, who accused Omar of supporting al-qaeda, is accused of “grossly distorting” comments she made in a PBS television interview in 2013 (see below) in which she laughed at Americans and seemed to compare America to the terrorist organization, al-qaeda.

During last night’s press conference, a reporter asked Omar if she supported al-qaeda. But rather than denounce the terrorist group, Omar, who is Muslim, declined to “dignify” the question with an answer.

Instead, she returned to Trump’s comments urging her to go back and fix her own country’s problems if she hates America.

Report: Cops were investigating Nipsey Hussle at time of his death