Nancy Pelosi is under fire for getting a blowout at a San Francisco hair salon that was shuttered amid the coronavirus.

The House Speaker is seen on leaked surveillance video having her hair done while not wearing a face mask or social distancing - actions she criticized President Trump for just hours after getting her hair done.

Pelosi's team issued a statement on Wednesday, blaming the salon owner for telling Pelosi the city said she could have one client at a time in the salon.

But salon owner Erica Kious disputed that explanation. She said she received a text message from one of the stylists who rents a booth at eSalon, asking her to open the shuttered salon because he had Nancy Pelosi coming in on Sunday.

"I'll be there at 2:45 tomorrow," the stylist texted. "Pelosi assistant just message me to do her hair."

Kious said, "I was like, are you kidding me right now? Do I let this happen? What do I do?"

After seeing Pelosi on surveillance video inside her salon the next day, Kious shared the surveillance footage with Fox News.

"It was a slap in the face that she went in, you know, that she feels that she can just go and get her stuff done while no one else can go in, and I can't work," Kious told Fox.

"We have been shut down for so long, not just me, but most of the small businesses and I just can't – it’s a feeling – a feeling of being deflated, helpless and honestly beaten down," she continued. "I have been fighting for six months for a business that took me 12 years to build to reopen."

The news spread like wildfire under the viral hashtag #Pelosimustgo. 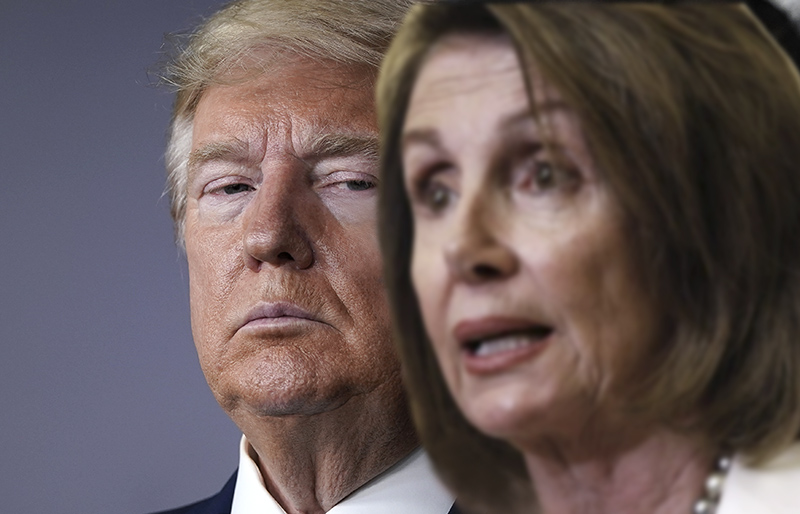 President Trump tweeted: "The Beauty Parlor owner must really dislike Crazy Nancy Pelosi. Turning her in, on tape, is a really big deal. She probably treats him like she treats everyone else...And she strongly supported a Kennedy who just lost in, of all places, Massachusetts!"

The Beauty Parlor owner must really dislike Crazy Nancy Pelosi. Turning her in, on tape, is a really big deal. She probably treats him like she treats everyone else...And she strongly supported a Kennedy who just lost in, of all places, Massachusetts!

Voters expressed their frustration with the Democratic Party for shuttering small businesses and ruining the economy just so they can return to power in November.

"The only things that 'matter' to Democrats is money and power," said one frustrated social media user.

@CongressmanHice wrote: There's one set of rules for the liberal elite, and another for the rest of us. Brazen hypocrisy. Double standards. #PelosiMustGo."

@w_terrence tweeted: "Nancy Pelosi think she's more important and better than the American people. She can go to Salons but other people have to stay home and not go to work or church. Raise your hand if you are ready for Pelosi to go!"

Others expressed similar outrage. Twitter marked all of their tweets as "Not helpful."

So Gov. Cuomo walks around town with no masks.
Mayor of Maryland dines inside
& Pelosi gets to go to the salon.
All breaking their own “rules”

In their elitist minds the rules are for us “plebs” you see. It’s all about CONTROL not “public health”#PelosiBlowout #PelosiMustGo

every barber shop, every hair salon, nail salon...all the small businesses on the brink of collapse thanks to the shutdown:

OPEN UP, tell them Nancy Pelosi says it's ok!!

yeah good luck with that if you're not an entitled Democrat hypocrite?#NancyAntoinette #PelosiMustGo

Wow @SpeakerPelosi lectures everyone else on wearing a mask and yet she gets her hair done in a salon without wearing a mask in close quarters with others.

Yes we can VOTE IN PERSON and OPEN SMALL BUSINESSES SAFELY.

Pelosi had the nerve to get her hair done while it would be illegal for her constituents. How many salons were forced to close bc of this tyranny?

Rules for thee; not for me.

This is DC swamp behavior and embodies everything the People despise about politics!#PelosiMustGo

Any Democratic lawmaker who defends @SpeakerPelosi is as worthless as she is.

How dare she scold us for trying to live our lives, then take advantage of her privilege as a lawmaker.

She works for us yet she acts like we're all below her.#PelosiMustGo

Nancy Pelosi is the very reason why we need term limits in politics. #PelosiMustGo