Nicki Minaj is furious over allegations that she’s addicted to cocaine. The 39-year-old rapper threatened to sue Twitter users for claiming she’s an addict.

If you’re among those making false allegations about Nicki, you’d be wise to lawyer up.

According to Snitch, it all started when Nicki shared a video while promoting the new remix for her single “Super Freaky Girl.” The remix features 5 up-and-coming female rappers, including JT, BIA, and Chicago gangbanger Katie Got Bandz.

Nicki simultaneously dissed bold name rap queens who weren’t asked to be on the remix.

Fans of rap icon Lil Kim and reality star Garcelle Beauvais — both of whom were disrespected by Nicki — also dropped gems in the hashtag thread. Nicki was livid!

The Barbie rapper collected the most offensive tweets and contacted her attorney about filing defamation lawsuits against her followers. 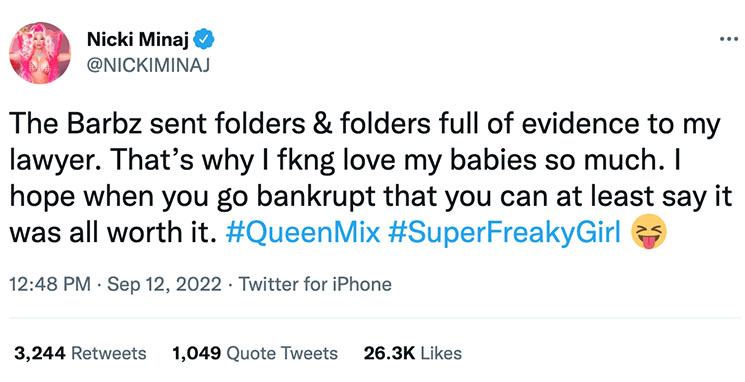 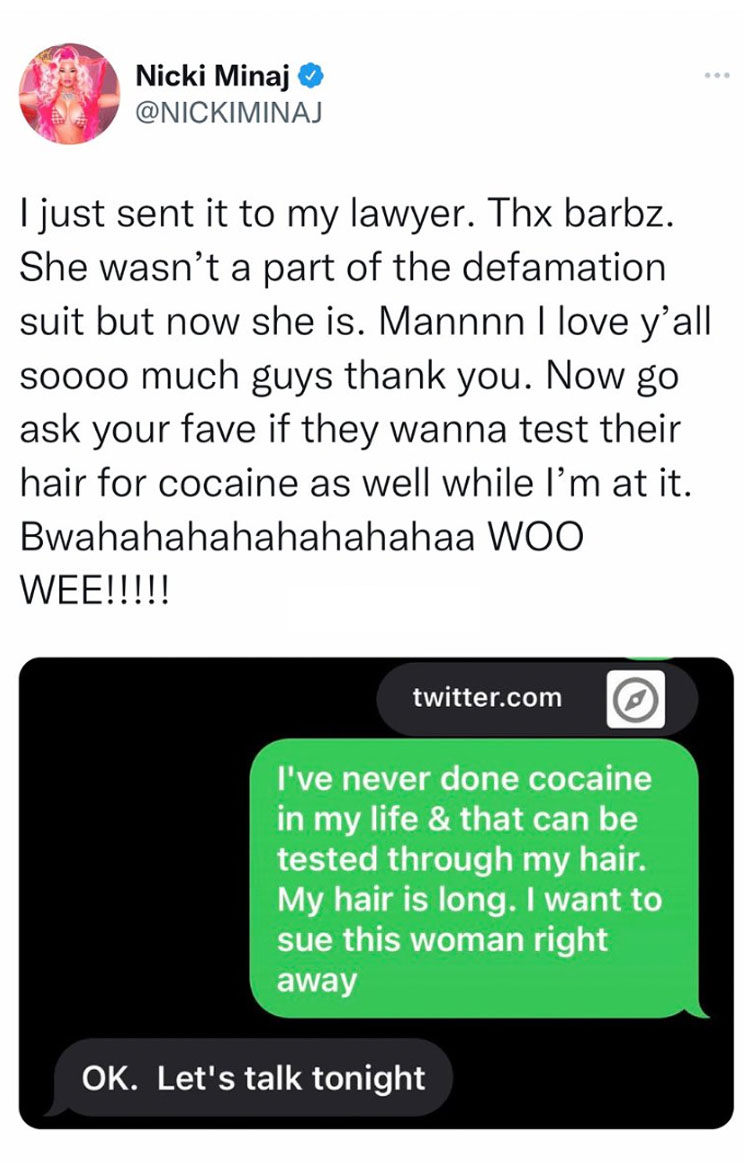 Anybody can just check the comments under my IG posts to see Nicki losing her whole mind. She is out of control and creeping me out tbh. I know yall got #itsgivingcoke trending but damn is it coke? Either way I’m looking for a lawyer as we speak. #Survivingthepettys

lets talk about the fact that Nicki always uses the black woman narrative but here she was yesterday, ATTACKING, HUMILIATING AND SUPPORTING THE BULLYING OF A BLACK WOMANS CHILD AND ATTACKING A BLACK WOMAN. NICKI IS DISGUSTING #ITSGIVINGCOKE

WHEN I TELL YOU HE ATE THAT WOMSN UP AND HER FANBASE. ?? pic.twitter.com/6TKVGSw12E

You #barbs are CULTY and we tired of ur shit and ur girl #itsgivingcoke ???? fuck ya for coming for @GarcelleB grow the fuck up yo like ur crazy ass leader should Garcelle is true class act but her fans we def come from a dif place as well don’t play with her she is legendary ! pic.twitter.com/EpkiPD1CUP