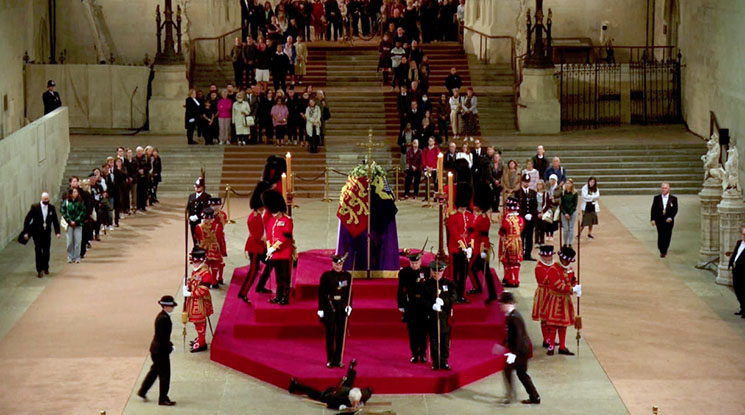 A royal guard fainted at Westminster Hall where the Queen of England is lying in state.

The closed coffin sits on a raised platform while a ring of ceremonial royal guards watches over it 24 hours a day.

BBC live footage showed one of the royal guards swaying, then tumbling off the raised platform.

Two officers sprinted over to the fallen guard, while the other royal guards remained completely still.

The BBC live feed cut to an exterior night shot of Westminster Hall after the guard collapsed around 1 a.m. Thursday.

JUST IN ? Royal guard at Westminster Hall, where the Queen is lying in state, collapsed pic.twitter.com/DagowtZmZK

The royal guards work six-hour shifts. The guard fainted as the next shift of ceremonial guards were about to swap places with him.

The Queen's coffin will remain in state at Westminster Hall until her funeral in Westminster Abbey on Monday, Sept 19.

World leaders, heads of state, and notable public figures from all over the world will be in attendance at the Queen's state funeral.