Finally got to meet & hold my new God daughter Laiyah Shannon Brown! She is so gorgeous just as I… http://t.co/GUd30Dm9bR 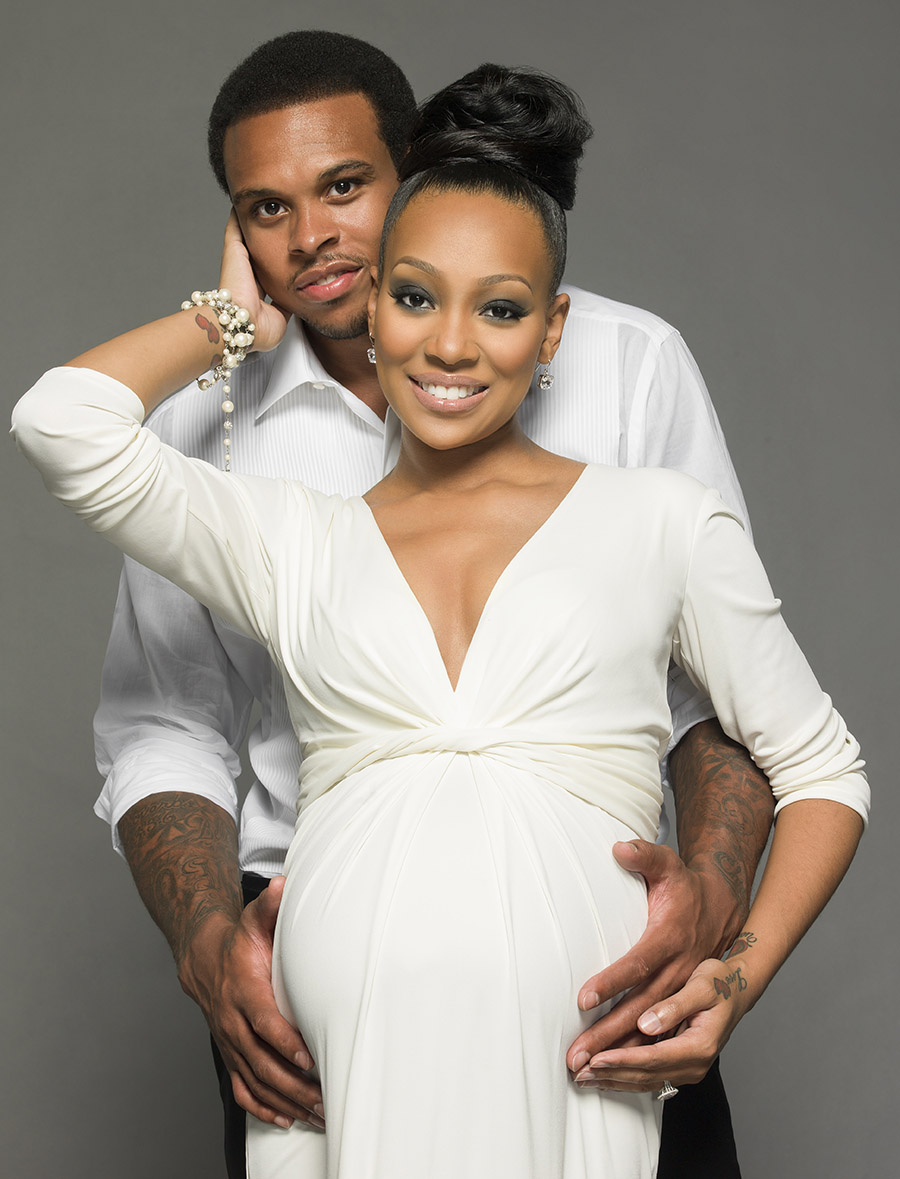 The invitations to Monica Brown's baby shower have gone out. Monica and her husband, Phoenix Suns star Shannon Brown are expecting their first baby -- a girl -- in September. The happy couple have already chosen the baby's name: Laiyah.

According to my source, Mo and Shannon are ecstatic. Both are parents of boys, so a girl will be a welcome addition to their family.

Monica's baby shower for family and close friends will be held at a private residence in Atlanta next weekend. The elegantly appointed invitation is pictured after the break. Monica's sons, Romelo Montez Hill, 5, and Rocko Ramone Hill III, 8, are so excited. They can't wait for their baby sister to arrive!

END_OF_DOCUMENT_TOKEN_TO_BE_REPLACED

“We are so thrilled,” said the Extra correspondent. Amy Belle is Calloway's first child, according to his publicist.

“I am still coming down from the moon … I now know what it feels like to have heaven in my arms.”

Calloway, 38, and his longtime girlfriend Dionne, age unknown, were married in June, three months after he proposed to her.

Calloway announced they were expecting their first child together in January, after he posted a sonogram photo on Instagram along with the caption, “World I want you all to get ready for the coolest kid on the come up … God is working overtime! Feeling blessed and overjoyed! Loving living and creating a life!"

Calloway already has experience with children. His ex-girlfriend in New York had a lot of mouths for Calloway to feed. Congrats to the happy couple!

"It's very emotional and it's such a special time. I think any parent probably knows what this feeling is like," Middleton said as she cradled her newborn in her arms.

Unlike narcissistic American celebrities, British royalty don't sell photos of their babies to the tabloids.

END_OF_DOCUMENT_TOKEN_TO_BE_REPLACED

Update: The future King of England has arrived.

END_OF_DOCUMENT_TOKEN_TO_BE_REPLACED

Reality TV star and R&B singer Tamar Braxton may or may not have delivered a baby boy on Thursday.

Tamar tweeted what seemed to be a birth announcement on her Twitter page last night: "#tamartian friends HE'S finally here!"

Coincidentally, Thursday was also the season 3 finale of WE tv's "Braxton Family Values."

END_OF_DOCUMENT_TOKEN_TO_BE_REPLACED

The story about the new mom in China who flushed her newborn son down the toilet because she didn't want him has taken a dramatic turn.

Neighbors called authorities after hearing a baby's faint cries in the plumbing above them. Rescue workers arrived and uses blow torches to cut through the L-shaped sewage pipe to reach the baby. The newborn, still encased in the sewage pipe, was rushed to a hospital where doctors and nurses used pliers to break open the pipe and extract the crying baby.

The infants eyes, nose and mouth was filled with sewage material.

END_OF_DOCUMENT_TOKEN_TO_BE_REPLACED

Kim Kardashian, who claims she's pregnant with Kanye West's baby, has chosen a name for the baby.

Kim appeared on last night's Tonight Show where she discussed the highs and lows of being a first-time expectant mother. When Jay Leno asked her about baby name rumors, she gladly cleared that up.

END_OF_DOCUMENT_TOKEN_TO_BE_REPLACED

A female federal prison guard has been arrested for tampering with federal property. The property in question is notorious cop killer Ronell Wilson, 30.

The feds took Nancy Gonzalez, 29, into custody Tuesday and charged her with illegally engaging in sexual activity with Wilson while he was confined at the Metropolitan Detention Center in Brooklyn, awaiting a hearing on his death penalty case.
Photo: Paul Martinka

END_OF_DOCUMENT_TOKEN_TO_BE_REPLACED

The Colombian singer and her 25-year-old soccer star boyfriend Gerard Pique of FC Barcelona welcomed son Milan Pique Mebarak in Barcelona, Spain at 9:36 p.m. on Tuesday. The baby weighed in at a healthy 6 pounds, 6 ounces. Milan is the couple's first child.

END_OF_DOCUMENT_TOKEN_TO_BE_REPLACED

When lesbian couple Jennifer Schreiner and Angela Bauer wanted a baby to complete their family in 2009, they turned to a friend, William Marotta, to donate his sperm. But the unorthodox "new normal" arrangement may lead to financial ramifications for the well meaning 46-year-old married man.

The state of Kansas sued Marotta for child support of the now 3-year-old girl after Schreiner filed for state assistance.

Marotta told The Topeka Capital-Journal newspaper he's "a little scared about where this is going to go, primarily for financial reasons."

END_OF_DOCUMENT_TOKEN_TO_BE_REPLACED

After spending almost 3 days retching her guts out in a London hospital, Duchess of Cambridge Kate Middleton emerged from the hospital for the first time. Kate and Prince William announced their pregnancy to the world on Monday. Middleton, 30, learned of her pregnancy when the Duke rushed her to the hospital for treatment of severe nausea and vomiting. Middleton was given IV infusions of saline (salt) water to rehydrate her. She is not yet 12 weeks along, but the British wags already predict twins for Kate and William.

The world is rejoicing over the news that Kate Middleton, Duchess of Cambridge, is pregnant with an heir to the throne of England. Middleton and Prince William, Duke of Cambridge, were married in an extravagant ceremony that was broadcast live all over the world in 2011.

The joyous news inspired the hashtag #ROYALBABY on Twitter.com this morning. Middleton, 30, is being treated in a local hospital for complaints of nausea and vomiting.