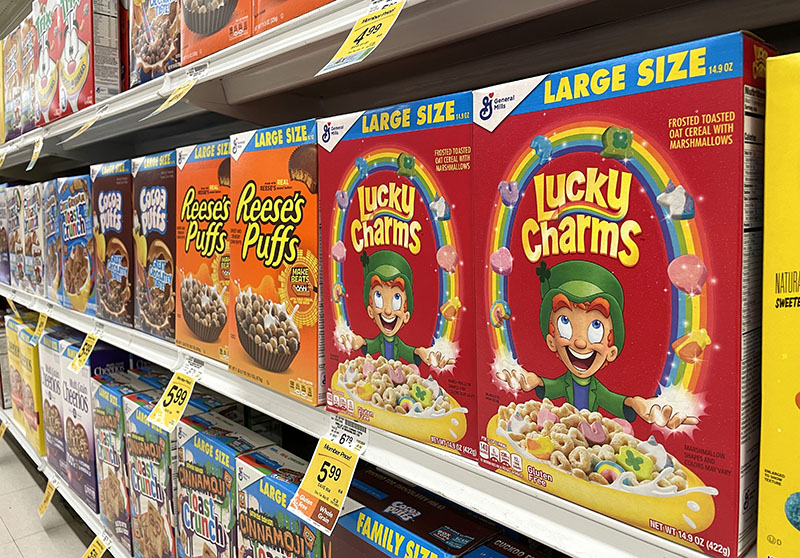 On Monday, the FDA announced an investigation into reports that Lucky Charms cereal is contaminated with bacteria or fungus that causes gastrointestinal problems.

Over 3,000 reports of gastrointestinal issues were made to consumer website iwaspoisoned.com since 2021.

General Mills denies the sweet cereal is the source of the reported diarrhea outbreaks. The company said it is unable to find a link to the reports in their factories where the cereal is made.

Reports are also coming in from Europe where the cereal is sold under the Lucky Charms brand.

So far, General Mills is not issuing recalls of the popular cereal or offering refunds at the site of purchase.

The "woke" cancel culture has come for the Black chef on the box of Cream of Wheat porridge mix.

B&G Foods, which owns Cream of Wheat, announced it will remove the iconic image of the Black chef from its packaging because the image of a Black chef is "racially insensitive".

The company became the latest "woke" corporation to drop a popular Black brand logo that they claim was stigmatized as a "racial stereotype" after the police killing of George Floyd in Minneapolis in May.

"For years, the image of an African-American chef appeared on our Cream of Wheat packaging. While research indicates the image may be based upon an actual Chicago chef named Frank White, it reminds some consumers of earlier depictions they find offensive."

But some Blacks accuse corporations of intentionally using the civil unrest in the U.S. to remove the iconic images of Black people from their packaging.

Soon there will be no more iconic Black images left in advertising. And some Black activists believe that's by design.

If you love Lucky Charms breakfast cereal, you're in luck. You can now grab a six pack of Lucky Charms flavored beer to chug with your favorite cereal.

END_OF_DOCUMENT_TOKEN_TO_BE_REPLACED

The cheerful Honey Bunches of Oats factory worker who retired after appearing in TV commercials for the breakfast cereal has been brought out of retirement to pitch more products.

END_OF_DOCUMENT_TOKEN_TO_BE_REPLACED

Donald Trump is the 45th president of these United States, and there is going to be hell to pay for conservative and alternate right-wing blogs that helped elect him.

END_OF_DOCUMENT_TOKEN_TO_BE_REPLACED

A humorous video of a future Olympian is currently making the rounds on social media.

The video shows a baby, still in diapers, skillfully climbing a refrigerator to reach his favorite breakfast food.

END_OF_DOCUMENT_TOKEN_TO_BE_REPLACED

The Food and Drug Administration (FDA) is conducting a criminal investigation into a video that appears to show a Kellogg's factory worker filming himself urinating on an empty conveyer belt where Kellogg's products are assembled.

END_OF_DOCUMENT_TOKEN_TO_BE_REPLACED

General Mills, the makers of Wheaties brand cereal, paid tribute to Devon Still's daughter Leah Still by sending her a photo of herself on the front of a Wheaties box.

Devon Still, who plays DT for the Cincinnati Bengals, posted the image on his social media page on Wednesday.

END_OF_DOCUMENT_TOKEN_TO_BE_REPLACED

General Mills drew attention to hundreds of ignorant comments under its Cheerios TV ad featuring a biracial family by disabling the comment section on YouTube.com.