In what sounds like a scene from Ghost Busters, a woman claims she's "possessed" by Michael Jackson's ghost -- and they are married.

Kathleen Roberts shared her ghostly matrimony in an article she wrote for the Daily Star, according to the NY Post.

Roberts alleges that she doesn't have sex with Jackson's ghostly apparition, however, he possesses her body to dance, sing and eat cookies.

In a video, Roberts claims Jackson "proposed" to her "clairvoyantly" and she accepted.

She also said the Rev. Martin Luther King Jr. officiated their nuptials, and that Jackson kept their marriage certificate.

"Michael stays in me all the time," said Roberts, who refers to Jackson as her "husband."

"So he comes to the restroom with me and calls these special bonding moments 'toiletries.' He stays possessed in me (relaxed not channeling and just enjoying living through me and communicating with me as a husband)."

"So he likes to eat in me. He loves cookies. He cusses a lot more than I'd expect him to as a former fan."

Roberts also claimed her supernatural senses have been previously misdiagnosed as schizophrenia. 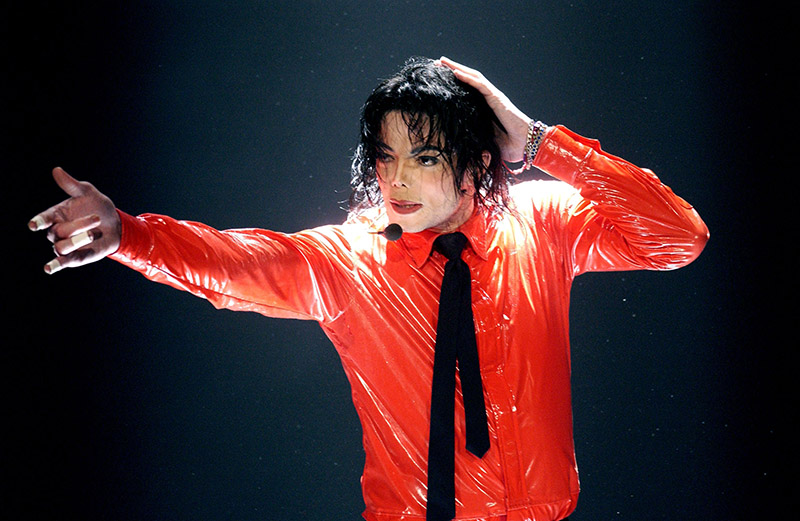 Jackson died at age 50 from respiratory and cardiac arrest due to an overdose of an intravenous sedative on June 25, 2009.

After losing an appeal, Murray served 2 years of a four-year prison sentence. His license to practice medicine in California was revoked.

The Internet is buzzing about an interview given by Conrad Murray, Michael Jackson's disgraced ex-personal physician.

The 60-year-old heart surgeon was released from a California prison 3 weeks ago. He immediately began giving interviews -- in exchange for substantial sums of cash because he's broke.

In an interview with The Daily Mail, Murray described a very simple procedure performed by doctors and nurses in hospitals and clinics every day.

END_OF_DOCUMENT_TOKEN_TO_BE_REPLACED

The Jackson family matriarch filed the lawsuit in February 2013, seeking up to $40 billion from AEG Live.

The jury found AEG was not liable for the actions of Michael's former personal physician Conrad Murray, who is scheduled to be released from prison this month after serving 2 years of a four-year sentence for negligent homicide in Michael's death.

The jury found that AEG had hired Murray as Jackson's personal physician, but that Murray was competent to practice medicine because he held a valid medical license.

END_OF_DOCUMENT_TOKEN_TO_BE_REPLACED

The 27-year-old girlfriend of Michael Jackson's personal physician will testify before a California grand jury this week.

Nicole Alvarez, who has a baby by Jackson's former cardiologist will be asked to give testimony, but the grand jury will not determined if Murray should be charged with a crime "at this time."

This Summer, prosecutors searched the apartment where Alvarez lives with the couple's infant son, but she was not forthcoming with detectives, according to the LA Times.

Dr. Murray is still married to his wife, Blanche, and has fathered six children with different women.

They say a sucker is born every minute, and there are plenty of con artists ready and willing to take advantage of them.

Take LaToya Jackson, for instance. She's facing foreclosure on her Las Vegas condo and her finances are in dire straits. Yet she's forking over thousands of dollars a week to a psychic who claims to be able to communicate with pop icon Michael Jackson from beyond the grave.

According to The Globe, LaToya spoke with many psychics before settling on one nut because she knew personal secrets about Michael that only the family knew.

“This woman psychic who lives in L.A. told La Toya some very personal details about Michael that only close family members would know,” the tattle continued. “La Toya knew right then that she was indeed in contact with Michael.”

"Not only does she go to the psychic’s house, but sometimes in the middle of the night when she wakes up thinking of her brother, she knows she can pick up the phone, no matter what time it is and be linked to him via seer.”

“He also communicates he’s constantly watching over his kids, Prince, Paris, Blanket, and sees they’re incredibly loved by their grandmother, Katherine, and the rest of the family,” the Globe source added. “Having this psychic connection to Michael is tremendously reassuring for her.”

Maybe LaToya should ask the psychic exactly what took place in Michael's bedroom the morning he died. That bit of info would help the DA's office tremendously in their investigation into his murder.

The L.A. County coroner, in typical Hollywood dramatic fashion, has finally released the cause of Michael Jackson's death. The actual report itself has still not been released, but the cause of death is due to an overdose of the sedative Propofol used in the induction of anesthesia, and acute benzodiapine intoxication, including Valium, Ativan and other prescription drugs found in Jackson's system. The manner of death is ruled a homicide. So far there have been no arrests made, but Jackson's personal physician, Dr. Conrad Murray is considered a suspect.

The report says "other conditions contributing to death: Benzodiazepine effect." Benzodiazepines are a group of drugs (see below) used to treat anxiety and insomnia.

The manner of death is ruled: "HOMICIDE."

The Coroner did not release the full autopsy report -- just a press notice. It goes on:

The drugs PROPOFOL and LORAZEPAM (Ativan) were found to be the primary drugs responsible for Mr. Jackson's death.

The final Coroner's report, including the toxicology report, will remain on security hold, per the LAPD.

According to TMZ.com, the LAPD don't believe that Michael Jackson's personal physician, Dr. Conrad Murray, told the truth when he said he administered a small dosage of the sedative Propofol (Diprivan) to Jackson.

The LAPD met with Dr. Murray on two occasions after Jackson died of a cardiac arrest in his rented mansion on June 25th.

In the police search warrant affidavit, Dr. Murray told police he gave Jackson 25mg of Propofol before Jackson stopped breathing. Murray said he normally gave Jackson 50mg of Propofol, but he decreased the dosage because he feared Jackson was becoming addicted.

Online reports attributed Jackson's death to a "lethal amount" of Propofol. The problem is the dosage of 25mg of Propofol listed in the police report is too small to cause death. An average maintenance dosage to adequately sedate an adult for hours is about 400mg (or more) per hour.

Now the police are backtracking and saying they believe Dr. Murray lied about the amount of Propofol he gave Jackson. But that amount is written in stone in the police affidavit. And you can bet that the defense attorneys for Dr. Murray will be all over that affidavit. So if Dr. Murray walks, the LAPD have no one to blame but themselves.

According to a police affidavit, Michael Jackson's personal physician waited 82 minutes to call 911 after Jackson stopped breathing on the fateful morning of June 25. Dr. Conrad Murray told police he treated Jackson for chronic insomnia for 6 months.

On the night of June 25th, Dr. Murray said he administered the benzodiazepine sedatives Ativan and Versed by IV push to Jackson all night long to help him sleep.

When those meds failed to induce sleep, Dr. Murray said he administered Propofol 25mg (by IV push?) to Jackson at 10:40 a.m. Murray then left the room for 2 minutes and returned to find Jackson not breathing and unresponsive.

If the police have a case against Dr. Murray, 57, it will be based on the length of time it took for him to seek emergency medical assistance for Jackson after he found him unresponsive. But there doesn't seem to be enough of a case for manslaughter. Gross medical negligence, yes, but it will be very difficult for the prosecutor's office to convince a jury that 25mg of the sedative Propofol (Diprivan) killed Jackson.

Theoretically, 25mg of Propofol could kill a patient whose respirations and blood pressure were already decreased. But attorneys and juries don't deal in theories.

If you're confused by the findings of Michael Jackson's autopsy report, you're not the only one. Something doesn't add up. So I'm going to wait until the official report comes out before I jump to conclusions.

Aaccording to the search warrant affidavit filed in Houston and published yesterday on TMZ.com, Jackson died with "a lethal amount" of the sedative Propofol (Diprivan) in his system. Yet the same report goes on to say that Dr. Murray administered only 25mg of Propofol IV to Jackson, which amounts to an equivalent of about 5 teaspoons or less than 1.5 tablespoons of medicine. In other words, that amount is nowhere near lethal.

The report also claims Dr. Murray gave Jackson IV Ativan. I can't ever recall giving a patient IV Ativan when it can easily be administered by mouth or by deep muscle injection. If this report holds up in court then Dr. Murray will probably be acquitted of murder because there is no smoking gun in that report. Any good lawyer worth his salt will tear that report apart in open court.

According to FOXNews.com, Michael Jackson's personal physician will be charged with manslaughter within the next two weeks.

This is not news to anyone, but a source told FOXNews.com that Murray could be charged as early as next Wednesday. In the meantime, investigators will serve one more warrant at a Los Angeles pharmacy as they build an airtight case against the financially strapped cardiologist.

Murray has admitted to giving Michael Jackson a home infusion of Diprivan (Propofol) a potent sedative used to induce anesthesia that should never be administered outside a hospital or clinic setting. Jackson went into respiratory and cardiac arrest when Dr. Murray left him alone during the infusion on June 25th to make phone calls. Jackson was later pronounced dead at UCLA Medical Center.