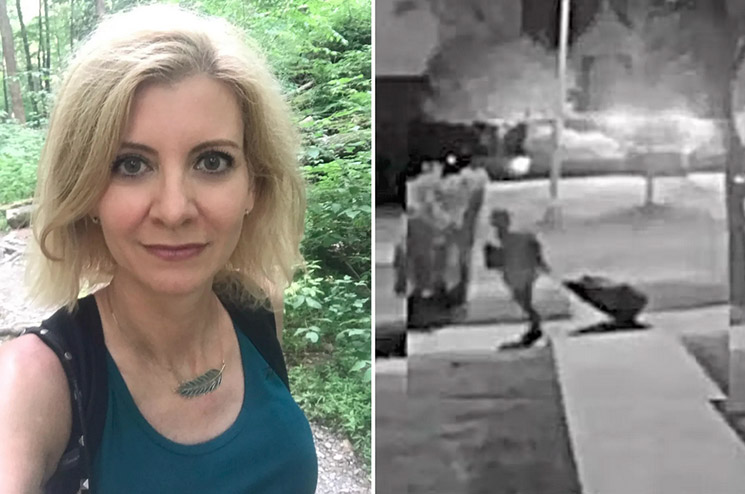 An arrest has been made in the brutal slaying of Orsolya Gaal whose body was found stuffed inside a hockey bag and left on a Queens street.

David Bonola, 44, was arrested early Thursday and charged with murder, criminal tampering and criminal possession of a weapon. He is accused of stabbing Gaal 58 times on the first floor of her $2.2 million Tudor-Style home early Saturday.

According to police, Bonola is Gaal's ex-lover and handyman who knew the layout of the house and knew where a spare key was kept.

Gaal, 51, went to a show with girlfriends on Friday night. She then went to a bar alone around midnight. S he left the bar 40 minutes later for the short drive home.

Bonola was reportedly waiting inside Gaal's home and killed her minutes after she arrived. He then cleaned up the crime scene and left the house with the duffel bag and a DVR containing surveillance footage from the home's security system.

Investigators say Bonola left behind "crucial evidence". A pair of blood-soaked boots were found in a trash can outside the garage.

His DNA linked him to the boots, the NYPD confirmed.

Gaal's 13-year-old son, Leo, was home at the time of the murder.

Gaal's husband and 17-year-old son were away visiting college campuses in Oregon.

Police say the couple had an open marriage and Gaal texted several men on the night she died.

Bonola, from Richmond Hill, has no prior arrests, according to police.

The shooting occurred at 9:40 p.m. Tuesday, Aug. 3, outside an apartment building on crowded Franklin Avenue near Prospect Place in Brooklyn.

The video, obtained by The NY Post, shows the unidentified shooter casually walk up to 42-year-old Delia Johnson and shoot her point blank in the head.

As terrified witnesses ducked and fled, the shooter nonchalantly strolled back to her white SUV that was doubled parked on the street.

Johnson was shot while having a conversation with people sitting on a stoop outside the building.

She was found unresponsive on the sidewalk and later pronounced dead at Interfaith Hospital, police say.

Police do not know the motive for the shooting. But Facebook users say the shooting was sparked by a dispute over a man.
&nbs

A Wisconsin woman was arrested for taking the law into her own hands after she caught her ex-boyfriend with another woman.

Kelly S. Hayes, of Madison, is accused of smashing out the windows of a car owned by her ex-boyfriend, then pouring an accelerant inside the car and setting it on fire.

The arson incident happened on the South Side on Tuesday, police say. The crime of passion was caught on cellphone video and uploaded to Facebook.

Police and fire crews responded to an apartment complex on the 2000 block of Greenway Cross around 5 p.m. The car, a Chevy Impala, was already engulfed in flames by the time fire crews arrived to put out the blaze.

A witness told police that a woman armed with a baseball bat broke out the windows on the car before dousing the car with gas and setting it on fire.

Cell phone video shows a woman wearing a black hoodie, face mask and gloves setting the car on fire. A small explosion knocked the women to the ground before she grabbed a red gas can and ran off.

Another witness got the license plate number of the car the scorned woman drove off in. Police ran the license plate and linked it to Hayes, 34, who had a past relationship with the unidentified car owner, police say.

Hayes was arrested and charged with suspicion of arson and criminal damage to property. She showed no remorse for her crime in her smiling mugshot.

The car is a total loss, police said.