Republican lawmakers joined millions of Americans who snatched off their masks when the CDC gave the greenlight last week.

The CDC announced fully vaccinated Americans can remove their masks indoors -- except in crowds.

Conservatives who never wore masks even during the peak of the Covid-19 outbreak celebrated the CDC's announcement as freedom from restrictions.

But House Speaker Nancy Pelosi imposed a $500 fine on any lawmaker who walked the halls of Congress without masks.

"Best $500 I ever spent," Republican Rep. Brian Mast told NBC News. He refused to wear a mask on the House floor even after a member of the House Sergeant at Arms' office approached him on Tuesday, in full view of C-SPAN's camera, and asked him to wear one.

Mast and Georgia Rep. Marjorie Taylor Greene were among a group of GOP lawmakers seen on the House floor without a face covering on Tuesday. They all paid Pelosi's $500 fine.

"Proud to join these Patriots for a peaceful protest on the House floor against mask mandates!," Greene tweeted with a photo showing her and other barefaced Republican lawmakers.

Proud to join these Patriots for a peaceful protest on the House floor against mask mandates!#FreeYourFace? pic.twitter.com/NSgC5Hfj4E

About 20 angry Republican lawmakers stormed a secure room in the Capitol building basement where House Democrats were holding a secretive impeachment hearing.

The 20 conservative Republicans were given the green light to disrupt the meeting by their boss, the president of the United States, Donald Trump.

The meeting was being held in the U.S. Capitol basement on Wednesday, when 20 Republicans pushed past security guards and stormed into the room with cellphones - which are banned from restricted areas in the Capitol building.

The lawmakers refused to leave, prompting the Democrats to call the police to remove them.

A Pentagon official was giving testimony in the impeachment inquiry against President Trump when the GOP lawmakers barged in. 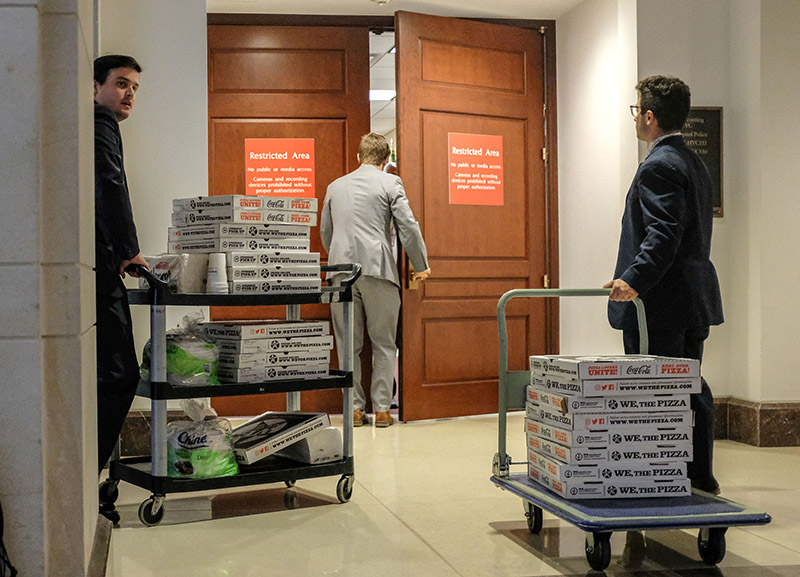 The pizza was delivered by Washington D.C.'s popular We, The Pizza shop, owned by former Top Chef contestant Spike Mendelsohn, whose website crashed on Wednesday and was still offline on Thursday morning.

The GOP lawmakers complained about the lack of transparency in the Democrats' secretive meeting. They accused the Democrats of attempting an illegal coup to remove a sitting president from office.

The Democrats are anxious to impeach Trump ahead of the 2020 presidential elections.

Trump was pleased after viewing news footage of the lawmakers storming into the Democrats' secret meeting. He told reporters that he approved of their planned standoff, according to White Houses sources who spoke with Bloomberg.

But Florida Rep. Matt Gaetz, who organized the unlawful disruption, denied speaking with Trump beforehand. "I led the effort and never discussed with POTUS," he tweeted on Wednesday.

END_OF_DOCUMENT_TOKEN_TO_BE_REPLACED

Speaking at a Republican fundraiser that raised $14.5 million at the Washington Convention Center Monday night, Gingrich said, "Bureaucrats managing companies does not work, politicians dominating the economy does not work,"

But the harshest criticism for Obama's policies was delivered by actor Jon Voight, otherwise known as actress Angelina Jolie's father.

"Everything Obama has recommended has turned out to be disastrous. We are becoming a weak nation,” said Voight, calling Obama a "false prophet." Republicans need to find their way back to power to free the nation from “this Obama oppression,” he said.

“I’m still just reveling that someone from Hollywood made a speech like that. I hope you’re going to be able to find work after this,” said McConnell. “I really enjoyed that." [link]