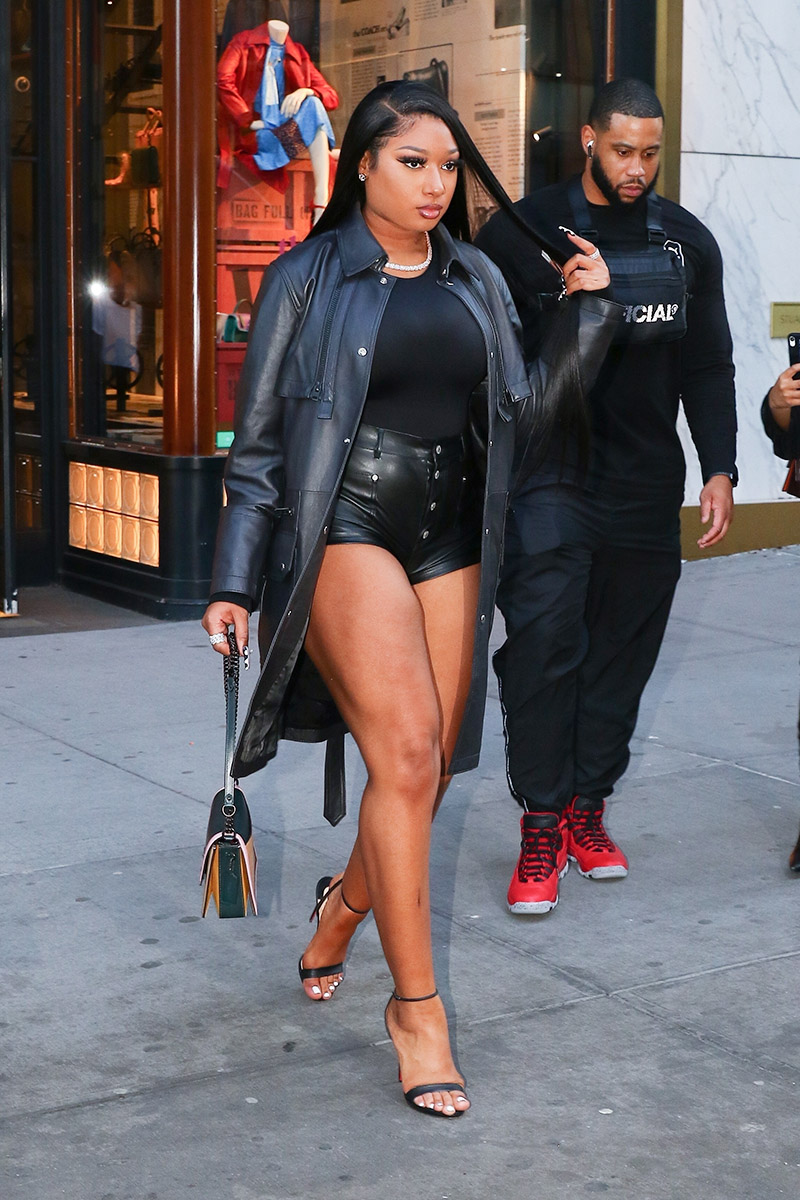 Megan Thee Stallion is just like you. The up-and-coming rapper is struggling to keep up with her college studies while juggling her tour schedule.

Megan paused for some retail therapy at the Coach Flagship Store amidst ongoing legal drama with her record label, 1501 Certified Entertainment.

The "Hot Girl Summer" artist is in the midst of obtaining her degree in health administration at Texas Southern University, but finding the time to study while constantly on the road has proved to be a challenge. 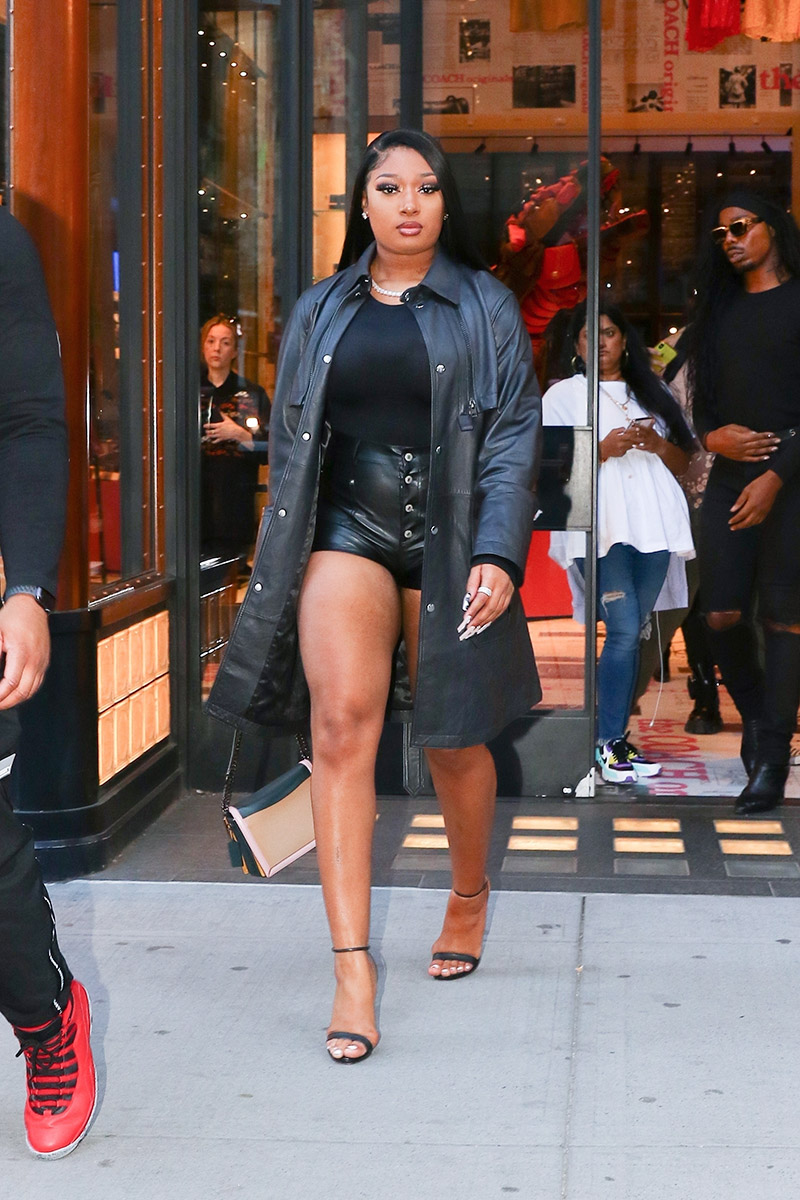 The 28-year-old knows she isn't the only working student, and she is determined to make the extra effort to graduate.

"School in general is hard," she shared. "I know my schedule is crazy because I'm on the road all the time and I'm rapping, but it's other women out there that are taking care of kids and working 9-to-5, graveyard shifts, so I know that a lot of people can relate to me.

"But when you're going to school and you're really dedicated and you really want it, you gon' figure out a way to make the time to do it."

Megan previously revealed she hopes to put her studies to good use and one day open her own assisted living facilities in her native Texas.

She is eager to hire her fellow classmates and others looking to break into the healthcare industry.

"When you first graduate from college it's really hard to get a job because nobody wants to hire you because you don't have any experience, so I really want my facilities to be (staffed by) some of my classmates and other kids that are just graduating from college that need jobs. Like, this could be your first job."

Unlike Morpheus in the "Matrix" Obama is offering nothing but a pack of lies and misinformation in regards to his health care reform bill.

During Wednesday night's televised presser to push his health care bill, Obama used a scenario of diabetics showing up at emergency rooms to have their feet amputated to demonstrate the need for primary care for uninsured Americans -- as if diabetics really do show up at emergency rooms regularly to have their legs taken off because they don't have a primary care physician.

The reality is that diabetics who aren't insured can apply for medicare or medicaid. I haven't met a diabetic yet who isn't under the care of a primary physician. Even homeless diabetics are assigned a primary care physician at Grady hospital.

He also accused doctors of scheduling tonsillectomies for children so the doctor could make more money. He suggested checking the child for allergies instead!!

Obama made it clear that under ObamaCare your doctor will have to find other alternatives to performing surgery that could save your life or the life of your child. But Obama has no problems sending money to other countries for abortions!

Obama uses unnecessary scare tactics to illustrate the urgency of his agenda, which is to socialize medicine as a first step to forcing our dependency on big government.

It's hard being a Kool Aid sipping Barack Hussein Obama cheerleader these days.

Since February, BHO's ratings have slid sharply -- dropping 12 percentage points -- since Americans figured out that he is nothing but a jive talking snake oil salesman.

Tonight, Obama faces the toughest challenge of his 7-month presidency when he goes before the nation to push his lame duck health care reform bill that nobody wants.

Obama, a true narcissist in every sense of the word, has effectively shielded himself against the naysayers who predict his health care reform bull will not pass.

Obama is even ignoring members of his own Democratic party who oppose the bill because he thinks he is The One.

The public attitude toward Messiah Obama and Congress is reflected in the major polls which show that Americans disapprove of the way he is handling the economy.

Americans are tired of Obama ramming costly bills through Congress without bothering to read them first. They are also wary of Obama's empty promises and his outright lies.

Unemployment within the black community is at an all-time high. Obama's Porkulus spending bill didn't put a dent in the unemployment numbers nationally as he promised it would. In fact the numbers are fast approaching double digits for the first time in 3 decades!

Yet Obama wants members of the House to vote on a health care reform bill in 2 weeks that will certainly result in even more job losses.

Definition of insanity: Doing the same thing over and over again and expecting a different result
~ Albert Einstein

Barack Hussein Obama campaigned for president on a shaky platform of Change. He promised to "hit the ground running" if elected president. He promised no taxes on the working class and relief for the millions of Americans who were losing their jobs and homes at record rates, yada yada yada...

So far, Obama has not made good on his promises -- including his promise to save or create 3 million jobs if his massive Porkulus spending bill was passed.

Despite the $787 billion stimulus bill, unemployment is fast approaching 10%. In Obama's 7 months in office he's managed to quadruple the national debt and has tried his best to undermine the economy of this great country by attempting to ram wasteful legislation through Congress.

It comes as no surprise that Obama is quickly losing support among his fellow Dems:

Could it be that President Barack Obama's Midas touch is starting to dull a bit, even among members of his own party?

Conservative House Democrats are balking at the cost and direction of Obama's top priority, an overhaul of the nation's health care system. A key Senate Democrat, Max Baucus of Montana, complains that Obama's opposition to paying for it with a tax on health benefits "is not helping us."

Another Democrat, Rep. Dan Boren of Oklahoma, tells his local newspaper that Obama is too liberal and is "very unpopular" in his district.

From his first days in office, Obama's popularity helped him pass the landmark $787 billion stimulus package and fueled his ambitious plans to overhaul the nation's health care system and tackle global warming.

Obama continues to be comparatively popular. But now recent national surveys have shown a measurable drop in his job approval rating, even among Democrats. A CBS news survey out this week had his national approval rating at 57 percent, and his standing among Democrats down 10 percentage points since last month, from 92 percent to 82 percent. READ MORE...

Red flags heralded the coming of Barack Obama even before his storied emergence onto the political scene.

The mystery was why so many followers fell for Obama's lies. And why his approval ratings stayed so high even in the face of his dismal failures.

Now, 6 months after Obama took the oath of office, his supporters have finally stopped drinking the Kool Aid.

A comparison of national and smaller public polls show a downward trend of independent voters who approve of Obama's job ratings. This is important because Obama needs these crucial independent voters if he has any hopes of winning a second term in office.

The polls are reacting to Obama's heavy handed free wheeling spending that has more than doubled the national debt since he took office.

So far, Obama's $800 billion stimulus bill (the one he didn't bother to read) has failed to stimulate anything other than the coffers of the Democrats who supported his bid for office.

“This is a huge sea change that is playing itself out in American politics,” said Democratic pollster Doug Schoen. “Independents who had become effectively operational Democrats in 2006 and 2008 are now up for grabs and are trending Republican.

“They’re saying, ‘Costing too much, no results, see the downside, not sure of the upside,’” he said.

Oh, and remember those jobs that Obama's administration promised would materialize if Congress passed his porkulus bill? Well, now the Obama administration is de-emphasizing the jobs creation provision of the bill as a requirement when "rating" proposed projects for possible funding -- a sign that the administration is beginning to panic.

And on Tuesday, the legendary investor Warren Buffet warned that unemployment -- which stands at 9.5% (the highest level in 26 years) -- could hit 11%!

Such signs are fueling discussions of yet a 2nd stimulus bill -- though no one in Obama's administration is willing to admit that a second bill is in the works.

Barack Obama had another "Joe the Plumber" moment during an ABC News’ special on health care reform, anchored from the White House by Diane Sawyer and Charles Gibson.

Obama opened his mouth and stuck his foot in it when a neurologist asked him if he would seek other "extraordinary" alternatives to his proposed government run public health plan if diagnostic tests weren't performed in a timely manner for his wife or children -- which is exactly what the wealthy from socialized countries do now.

As a registered nurse I have cared for wealthy foreign patients who were denied timely medical care in their own countries where health care is socialized.

Dr. Orrin Devinsky, a neurologist and researcher at the New York University Langone Medical Center, asked the president pointedly if he would be willing to promise that he wouldn’t seek such extraordinary help for his wife or daughters if they became sick and the public plan he’s proposing limited the tests or treatment they can get.

[Obama replied] if “it’s my family member, if it’s my wife, if it’s my children, if it’s my grandmother, I always want them to get the very best care."

So in other words, what's good for the rest of us is not good enough for Obama and his kinfolk?

America is the last country in the free world where all citizens (and illegal immigrants) have the same access to quality health care (via emergency rooms).

We don't want socialized medicine here. Medicare and Medicaid programs are already in place for those who are uninsured. Obama should work on expanding those programs instead of implementing a government monopoly insurance plan that would drive private insurance companies out of business and force our dependency on the government for health care.

Anyone who's ever been to a free clinic knows what I'm talking about.

Finally, President Barack Obama got one right: Yesterday President Obama announced plans to boost measures to allow patients with disabilities to remain in their homes instead of being institutionalized.

10 years ago yesterday the Supreme court made a landmark decision on Olmstead vs. L.C., which said that the Medicaid/Medicare rules limiting round-the-clock medical care to only those patients in nursing facilities violated the Americans with Disabilities Act.

"The Olmstead ruling was a critical step forward for our nation, articulating one of the most fundamental rights of Americans with disabilities: Having the choice to live independently," President Obama said in a statement <3> intended to kick off what he termed "The Year of Community Living."

"I am proud to launch this initiative to reaffirm my Administration's commitment to vigorous enforcement of civil rights for Americans with disabilities and to ensuring the fullest inclusion of all people in the life of our nation," Obama said. READ MORE...

As a home health nurse (RN) I can appreciate this announcement because for decades (mostly poor and black) families have been denied round-the-clock in-home care by the government unless their family member is in a nursing home.

The previous Medicare rules were unfair to families who couldn't afford to pay out of their pockets to keep their loved ones at home with the assistance of visiting nurses or in-home nursing. This is certainly a step in the right direction!

This measure also means more money for home health companies whose nurses are the hardest working and most compassionate nurses in the medical profession (if I may say so myself).