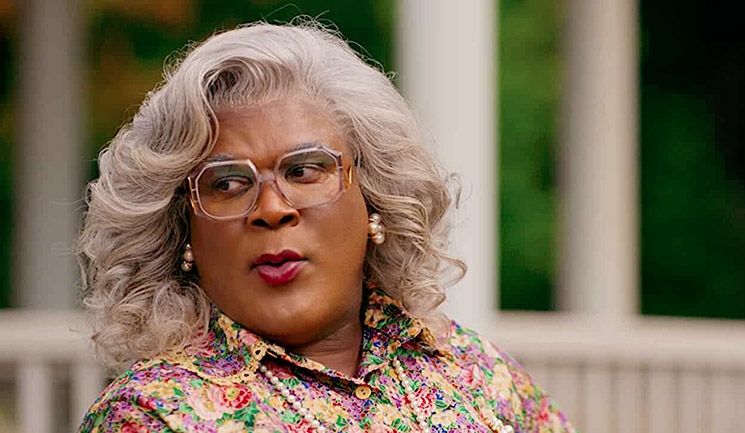 Tyler Perry's A Madea Homecoming is a huge hit. Tyler's latest comedy movie is the number one streaming film on Netflix.

Tyler brought Madea Simmons out of retirement for her great-grandson's college graduation celebration.

Perry stars as Madea, the silver haired, feisty matriarch who carries a small gun in her purse.

A Madea Homecoming is Tyler's second film to be released on Netflix. The movie is getting rave reviews from movie critics. Variety.com calls the film "The Fastest, Funniest Tyler Perry Movie in a While."

Those who had something negative to say complained about the copious use of the n-word and the f-bombs dropped throughout the movie.

But fans are still buzzing about the ending credits scene in which Madea reenacts Beyonce's Coachella performance of her hit song "Drunk In Love" at Machella.

Madea is 68 years old and 6-foot-5, but she and Beyonce, 40, could pass for twins. The resemblance is uncanny.

Tyler Perry is bringing his iconic character Madea out of retirement for a Netflix movie.

"A Madea Homegoing" is the first Tyler Perry movie to skip theaters and head directly to the streaming platform.

Netflix dropped the first trailer for "A Madea Homegoing" on Wednesday, after teasing the movie on social media.

"Live from her backyard. I want to thank my incredible Moth-hive. MS-Chella," Perry wrote on Instagram.

Tyler killed off his feisty grandmama character in 2019. He said it was time to retire the outspoken senior citizen who had a lengthy criminal record dating back to age 9.

When Tyler Perry said he was retiring his famous character, Madea, everyone knew Madea would be back.

The Oscar and Emmy winning playwright and director confirmed he is resurrecting Mabel Earlene 'Madea' Simmons for a Netflix film streaming next year.

Perry said the world needs a good laugh after the Covid-19 pandemic and political turmoil.

"We need to laugh, man," the 51-year-old movie/TV mogul explained in a video where he appears possessed by Madea.

"Too much is going on in the country. We need to laugh, so I was done (but I wasn't!), but she's coming back."

Perry announced his plan to kill off Madea during an interview on Sirius XM radio in 2018.

He said he filmed Madea's funeral 2 years prior, and he was finally able to let her go.

Perry held Madea's funeral as a symbolic gesture to allow her fans time to mourn her passing. Her body was symbolically interred in a mausoleum in Georgia.

Tyler, born Emmitt Perry Jr., said he didn't "want to be her age playing her" but he changed his mind after Netflix asked him to bring Madea back from the dead.

Tyler Perry played Santa Claus by paying off $434,000 worth of layaways at Walmart for holiday shoppers. Tyler announced his generosity on social media.

END_OF_DOCUMENT_TOKEN_TO_BE_REPLACED

Mabel Earlene "Madea" Simmons will die next year, according to Tyler Perry who plans to kill off the feisty grandmama character who helped make him famous in plays and movies.