"The Breakfast Club" co-host Rashawn "DJ Envy" Casey is under attack for comments he made regarding the fatal shooting of 16-year-old Ma'Khia Bryant.

Ma'Khia was gunned down by a Columbus, Ohio police officer on April 20 when she attempted to stab a woman during a fight over an unmade bed at a foster group home.

DJ Envy chose the side of reason and facts during a debate with co-host Charlamagne the god, who allowed anger to rule his emotions.

After the show, Black Twitter went into a frenzy, attacking DJ Envy and calling him a sellout.

"I understand people are upset and they have the right to be — but what I don't like is this cancel culture, when they try to cancel somebody for an opinion," DJ Envy tells Page Six.

"It doesn't hurt me ... because people are mad about what's going on and I'm mad and upset as well. But I know who's on my side and who's not. I know who tries to help the community and who doesn't. We sit here and raise money every year for organizations that fight against this. I help our community with financial freedom and learning about buying their own homes, and their own investment properties. So people can have financial freedom so they can use their own money."

"Every case is different," Envy told Page Six. "And in this case, if I pull up to a scene and see a girl chasing another girl about to stab a girl, my job as a police officer is to make sure that girl doesn't get killed. And the law allows me to stop that killing or that stabbing by any means necessary. That's what the law allows me to do, on both sides.

He added, "Everybody's saying [the police] shoot first, but he possibly saved that [other girl's] life ... if she would've stabbed her who knows if she would've lived. She could have got cut in the throat, in the face, we just don’t know what could happen."

DJ Envy is the son of a retired NYPD cop, and a victim of police harassment. He said he "has experienced with both sides of the spectrum."

Watch video of DJ Envy and Charlamagne's debate below. 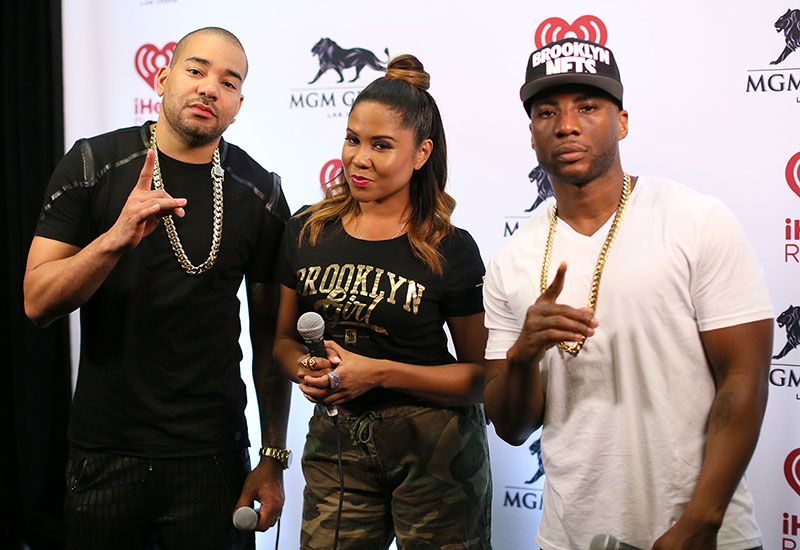 The foster mom to Ma'Khia Bryant revealed the reason behind the fight before the teen was gunned down by a police officer.

Bryant, 16, was shot four times by Columbus Officer Nick Reardon as she raised a knife to stab a woman during a fight on Tuesday.

Angela Moore said the fight started over an unmade bed. "It was over keeping the house clean," she told CNN. "The older one told them to clean up the house because 'Mom doesn't like the house dirty.' So that's how it all started."

Moore said the 16-year-old and two other girls brawled before police were called. Moore said she received a frantic phone call from a former foster daughter who is seen wearing pink and carrying a small dog in police body cam video.

Officer Reardon shot Bryant as she lunged to stab the woman. The teen was pronounced dead at a hospital.

The foster mother told CNN she started to pray and received text messages from people sending their condolences before she arrived at the group home.

Bryant's mother Paula said she was a good girl who loved music, cooking and making TikTok videos. Bryant and her younger sister lived in the group home with other girls.

Neighbor Donavon Brinson who turned over home surveillance video to police said the shooting was justified.

Another neighbor, Ira Graham III, said he believes the police body cam footage shows Bryant was in "full attack mode" and "needed to be stopped."

The Columbus police officer who fatally shot Ma'Khia Bryant is a military-trained marksman and son of a basic training sergeant.

Bryant, 16, was shot four times as she raised a knife to stab a woman outside a foster group home.

Audio of 911 calls released Wednesday included a female voice saying people are "trying to stab us, trying to put their hands on our grandma."

One of the arriving officers was later identified as Nicholas "Nick" Reardon, a U.S. Air National Guardsman who received an expert marksman badge with an M4 Carbine.

Reardon yelled "What's going on?" as Bryant tried to stab a woman wearing a pink jumpsuit and holding a small dog.

The officer shouted "Get down! Get down!" before firing four shots at Bryant.

Bryant collapsed to the ground and was pronounced dead at a hospital.

A Twitter post, dated May 14, 2020, mentioned that a Sgt. Ed Reardon with 32 years in law enforcement was retiring after training 700 recruits at Columbus PD's Academy.

A commenter noted that "One of his son's [sic] is currently a Columbus Police recruit," referring to Officer Reardon.

Her aunt, Hazel Bryant, told The Dispatch that Bryant "got into an altercation with someone else at the home." Hazel said that Bryant dropped the knife before she was shot.

Prominent civil rights attorney Ben Crump tweeted that Bryant was "unarmed" when she was shot.

However, after reviewing the police body cam video, police and city officials determined the shooting was justified.

"It's a tragic day in the city of Columbus. It's a horrible, heartbreaking situation," Columbus Mayor Andrew Ginther said Tuesday night. "The city of Columbus lost a [16-year-old] girl today. We know based on this footage, the officer took action to protect another young girl in our community. But a family is grieving tonight. And this young [16-year-old] girl will never be coming home."

LeBron James is accused of inciting violence against the Ohio police officer who saved the life of a woman by killing her attacker.

James deleted a tweet targeting the officer who shot 16-year-old Ma'Khia Bryant as she raised a knife to stab another female on Tuesday.

The officer shot Bryant four times after she ignored his commands. She collapsed to the ground and was pronounced dead at a hospital.

The shooting occurred on Tuesday, April 20, about an hour before the Derek Chauvin guilty verdict was announced in Minnesota.

As protests erupted in Ohio, the Los Angeles Lakers star and Ohio native posted a photo of the officer and tweeted "YOU'RE NEXT". He added the hashtag "ACCOUNTABILITY".

Her aunt, Hazel Bryant, told The Dispatch that Bryant "got into an altercation with someone else at the home." Hazel said that Bryant dropped the knife before she was shot.

Prominent civil rights attorney Ben Crump tweeted that Bryant was "unarmed" when she was shot.

"As we breathed a collective sigh of relief today, a community in Columbus felt the sting of another police shooting as @ColumbusPolice killed an unarmed 15 [year old] Black girl named Makiyah Bryant. Another child lost!," Crump tweeted hours after the shooting.

However, after reviewing the police body cam video, police and city officials determined the shooting was justified.

"It's a tragic day in the city of Columbus. It's a horrible, heartbreaking situation," Columbus Mayor Andrew Ginther said Tuesday night. "The city of Columbus lost a [16-year-old] girl today. We know based on this footage, the officer took action to protect another young girl in our community. But a family is grieving tonight. And this young [16-year-old] girl will never be coming home."