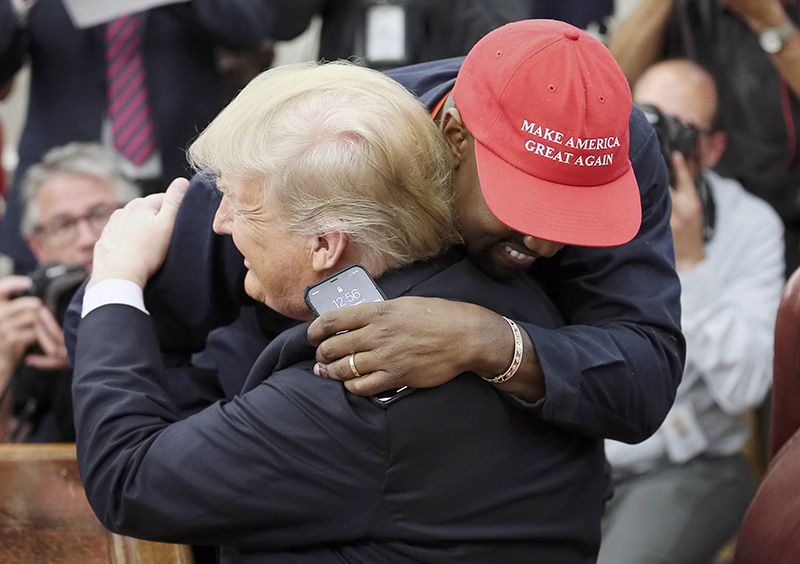 Kanye West dropped out of the 2020 U.S. presidential race - after a heart-to-heart talk with President Donald Trump.

According to Washington insiders, Trump convinced his good friend to drop out of the race because the publicity surrounding West's run was negatively impacting his own campaign.

The 43-year-old rapper announced his intention to run for president two weeks ago. Democrats immediately accused West of conspiring with Trump to help him siphon off Democratic votes.

"So Trump got Kanye to try to split the Black vote," tweeted @DrBFPalmer on July 5.

And @JB93621 tweeted: "Yep gonna try and split young votes from Biden and help his buddy trump get re-elected." 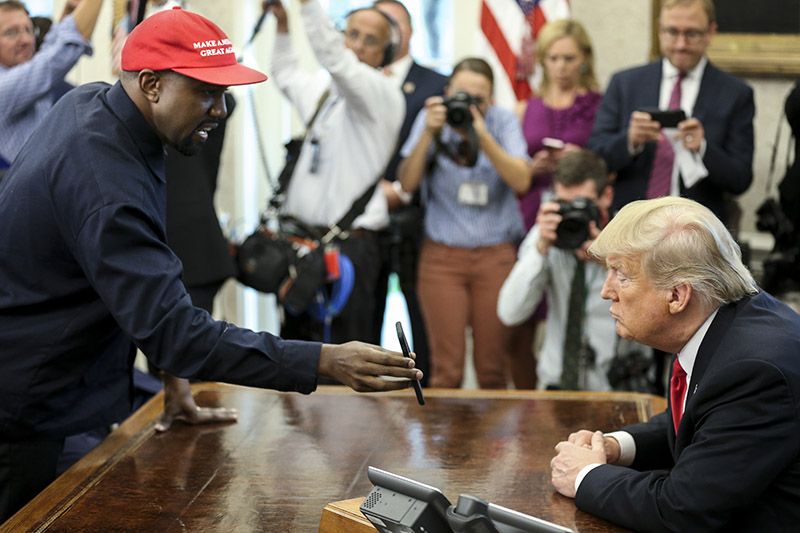 The election strategist added: "I have nothing good or bad to say about Kanye. Everyone has their personal decision about why they make decisions."

Kramer joined West's campaign team to get the rapper on the ballot in Florida and South Carolina. 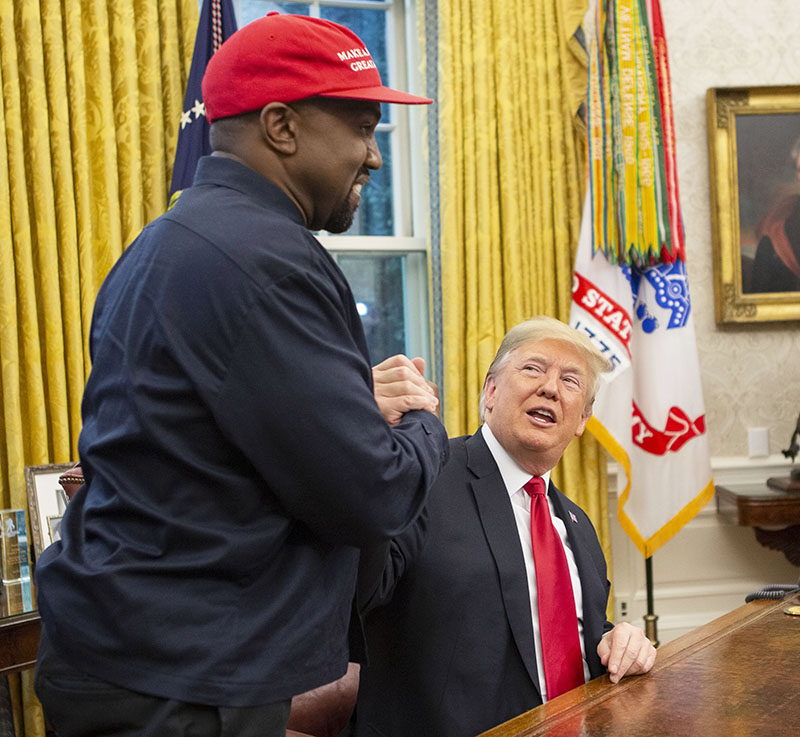 West tried to put some distance between himself and Trump by claiming he no longer supported the president after he "caught wind that he hid in the bunker" during the Black Lives Matter uprising in Washington, D.C. last month. 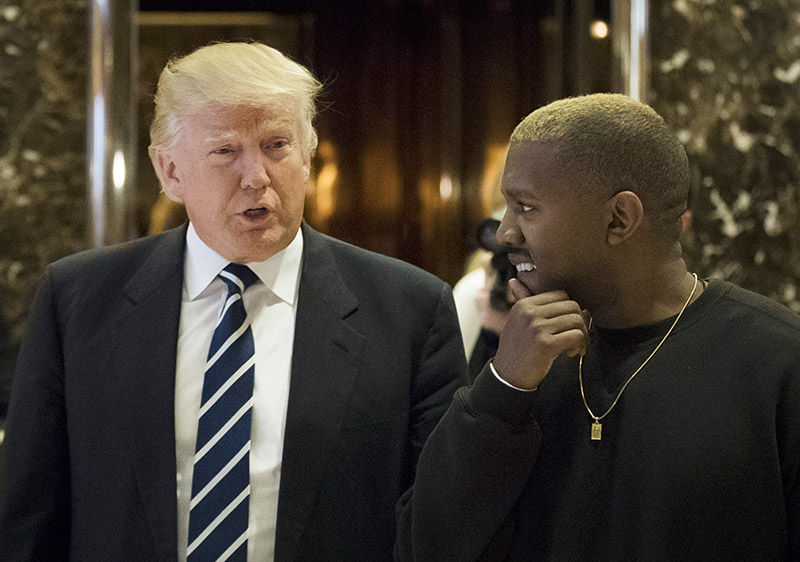 Trump, 73, brushed aside news that West was gunning for his job in a recent chat with Fox News' Sean Hannity. The president expressed confidence that his job was safe.

"[He's a] very good guy. He is a person that I get along with very well," Trump said. "At the end I think he would support us over anyone else, we have to stop the radical left from taking over our country."

Tesla boss Elon Musk, who was West's campaign adviser, reportedly also asked the rapper to drop out of the race. Musk later said West wasn't ready to run for president until 2024.

Owens stunned her followers when she made the announcement Friday that she was in talks with Biden's team.

"I can confirm I am in advanced conversations with the Biden team," Owens tweeted in response to a tweet on Friday.

Owens retweeted standup comic Tim Dillon, who wrote, "If Biden picks @RealCandaceO it would be wild. She would destroy Pence."

I can confirm I am in advanced conversations with the Biden team. https://t.co/rY5eOeWG79

Biden previously vowed h would pick a woman as his running mate on the presidential ticket.

There is mounting pressure on Biden to pick a Black woman as his vice president.

Question: Would you vote for Joe Biden if he picked Candace Owens as his running mate?

Lance Bottoms made national headlines when she endorsed Biden for president. She hosted Biden's campaign stop in Atlanta, and since then, she has gone on the road to stump for him.

A 2019 FBI report shows a spike in the number of violent crimes in Atlanta in the first half of 2019 compared to the same period in 2018.

Critics blame the Mayor's cash bail reform and her order to end police chases in Atlanta for the spike in violent crimes.

Atlantans question why Lance Bottoms is on the campaign trail with Biden, who is seen as a long run for the Democratic nomination.

Political insiders say Lance Bottoms is on the campaign trail with Biden because her name is on the short list to be Biden's running mate.

@Kelving2016 wrote: "Still stomping for Biden???? You're going to mess around and lose the mayorship following behind him. I have told you constantly but you refuse to acknowledge. I wish you the best."

And @terrilz wrote "Shouldn't you be governing in Atl. Fixing the enormous crime problem?" 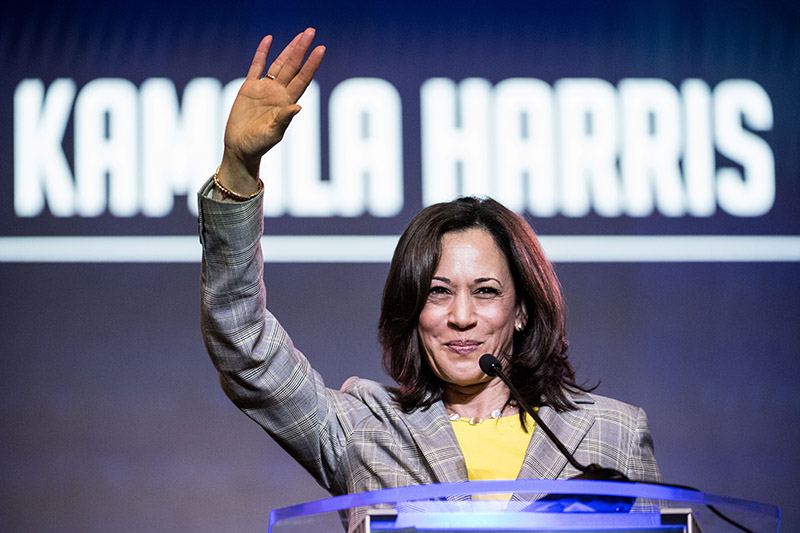 California Senator Kamala Harris has dropped out of the 2020 presidential race. Harris dropped out after her campaign failed to raise enough donations to pay her staff.

Harris reportedly held a conference call with her campaign staff earlier Tuesday in Iowa where she explained that the campaign was having financial struggles.

Her campaign hadn't bought TV ads in months and she was forced to advertise on social media. Last month she laid off most of her campaign staff. 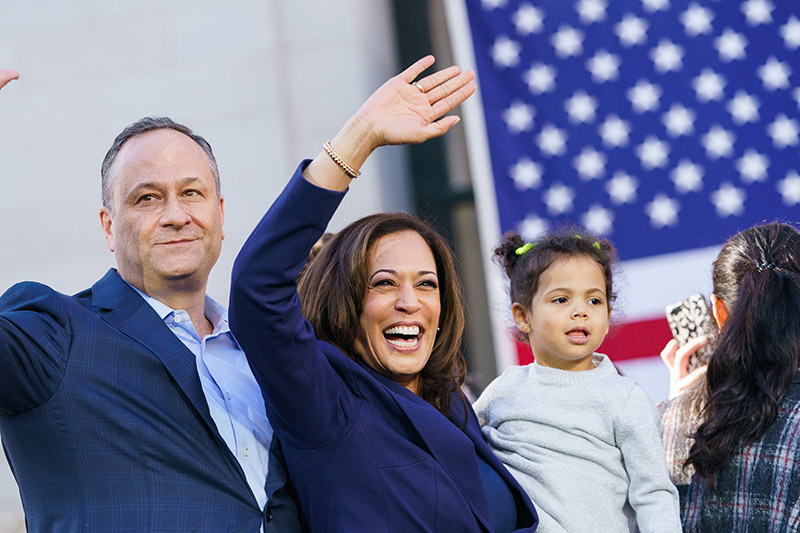 In the letter, obtained by The New York Times, Kelly Mehlenbacher wrote, "This is my third presidential campaign and I have never seen an organization treat its staff so poorly."

Mehlenbacher added that she resigned from Harris' campaign because she saw no hope of Harris winning the nomination.

"With less than 90 days until Iowa we still do not have a real plan to win... We have refused to confront our mistakes, foster an environment of critical thinking and honest feedback, or trust the expertise of talented staff."

Harris is married to attorney Douglas Emhoff. They have no children.

Just in case you missed the message that Oprah Winfrey is not running for president in 2020, she repeated herself in the March 2018 issue of In Style magazine. The 63-year-old billionaire confirmed that she has no desire whatsoever to oust President Donald Trump from the White House -- even though many think she has the best chance.

"It's not something that interests me," she said. "I don't have the DNA for it."

END_OF_DOCUMENT_TOKEN_TO_BE_REPLACED

Members of a French protest group are calling on former U.S. President Barack Obama to run for president there. A website posted a petition urging the French people to vote for Obama for president.

END_OF_DOCUMENT_TOKEN_TO_BE_REPLACED

Jay Z and Beyonce's life of excess and depraved riches may be why Hillary Clinton lost the support of rural America and blue collar workers.

END_OF_DOCUMENT_TOKEN_TO_BE_REPLACED

Democratic candidate Hillary Clinton must be having her doubts. She reportedly cancelled her big fireworks victory party in NYC, scheduled for Tuesday.

But hold the phone…

END_OF_DOCUMENT_TOKEN_TO_BE_REPLACED

Chappelle, who is preparing to host Saturday Night Live on Nov. 12, devoted most of his 60-minute set to bashing Hillary Clinton at The Cutting Room in New York.

END_OF_DOCUMENT_TOKEN_TO_BE_REPLACED

With 4 days left until the presidential election, the Clinton campaign and President Obama are desperately pushing the false narrative that Black Voter turnout is the lowest since 2008.

END_OF_DOCUMENT_TOKEN_TO_BE_REPLACED

Music producer Pharrell Williams urged all females to go to the polls and vote for Hillary Clinton -- even if she's dishonest.

Hillary's dishonest, but so are you, Williams seemed to imply to a room full of women while campaigning for Clinton at an industry conference on Tuesday.

END_OF_DOCUMENT_TOKEN_TO_BE_REPLACED

Someone compiled these images of former Secretary of State Hillary Clinton throwing back shots and beer chasers in pubs and bars. Rumors have been swirling for years that Clinton is a chronic alcoholic.

END_OF_DOCUMENT_TOKEN_TO_BE_REPLACED

WikiLeaks released a new email batch today as part of its daily John Podesta email dump. Podesta is the Chairman for Hillary Clinton's 2016 campaign for president.

In an explosive email that is sure to cause friction within the Clinton campaign, Podesta implies what most of us already know: that Hillary Clinton is a pathological liar.

END_OF_DOCUMENT_TOKEN_TO_BE_REPLACED

The 3rd and final presidential debate between Donald Trump and Hillary Clinton will take place tonight at UNLV in Las Vegas, Nevada.

Tonight's debate could be the deciding factor in the hotly contested battle for the White House.