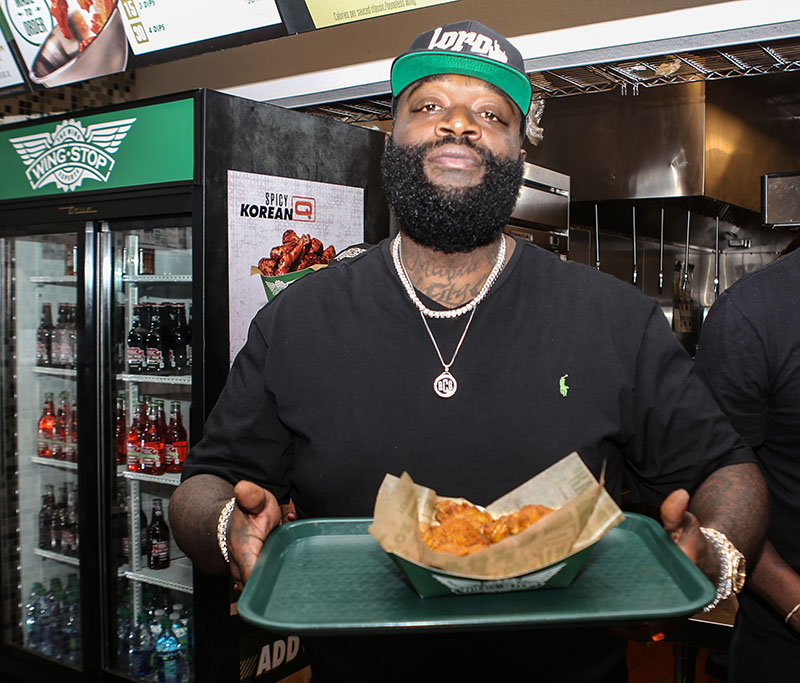 Rick Ross was fined by a federal agency for violating federal labor laws at his Mississippi Wingstop locations.

The Department of Labor Wage and Hour Division investigated complaints against Ross and his family and determined that they violated labor laws by forcing workers to pay for their own uniforms, background checks, cash register shortages and safety training.

Most of the employees earned minimum wage of $7.25/hr. — not enough money to house, feed and clothe a family of three in today's recession.

The DOLWHD says Ross and his family paid $114,427 fines "in back wages, liquidated damages and civil penalties."

Future violations could result in the loss of his restaurants in the state.

"Restaurant industry employees work hard, often for low wages, and many depend on every dollar earned to make ends meet," said Wage and Hour Division District Director Audrey Hall in Jackson. "The law prevents Boss Wing Enterprises LLC from shifting operating costs to workers by deducting the costs of uniforms, cash register shortages or training expenses, or to allow a worker’s pay to fall below the minimum wage rate."

Ross, who lives in Fayetteville, Georgia, has not responded to the allegations.

A Burger King signage went viral after a group of disgruntled Burger King employees walked off the job at the same time at a Lincoln, Nebraska location.

The former employees walked off the job and left a message on the Burger King sign announcing: "WE ALL QUIT. SORRY FOR THE INCONVENIENCE."

According to the former employees, they were upset over poor work conditions, low pay and long hours. They chose to collect unemployment which pays more than the minimum wage in Nebraska.

"They have gone through so many district managers since I've been GM," said former general manager Rachel Flores who was among the disgruntled workers that resigned. "No one has come to the store to help me out. They're so in and out."

Flores told reporters the sign was something they all came up with to inform customers that the restaurant was closed and "just kind of a laugh to upper management."

"The work experience described at this location is not in Lin with our brand values. Our franchisee is looking into this situation to ensure this doesn't happen in the future."

Flores said she was surprised the sign went viral on social media.

"I didn't think anybody was going to notice it, because we did just one sign, and then it went pretty crazy on Facebook," she said. "I got a call from my upper management and they told me I needed to take it down."

A Pizza Hut franchise owner is threatening to punish low-wage fast food workers who evacuated Hurricane Irma for longer than 72 hours. An internal memo sent to employees is being circulated on social media.

END_OF_DOCUMENT_TOKEN_TO_BE_REPLACED

Rap tycoon and restauranteur Rick Ross is expanding his restaurant portfolio with a Checkers franchise. Ross purchased a Checkers Restaurant in Carol City, the tough neighborhood where Ross grew up in Miami Gardens, Fla.

END_OF_DOCUMENT_TOKEN_TO_BE_REPLACED

State and city authorities raided all 3 locations of Gladys Knight’s popular Chicken and Waffles restaurants in Atlanta on Tuesday.

The AJC.com reports that agents from the Georgia Department of Revenue raided the locations in connection with an investigation by the GDR.

END_OF_DOCUMENT_TOKEN_TO_BE_REPLACED

Troubled singer Chris Brown is a businessman and entrepreneur who owns a string of Burger King franchises in his investment portfolio. Who knew?

Brown made the startling revelation in Us Weekly magazine's '25 Things You Don't Know About Me.'