Block, who has appeared on Real Housewives of Atlanta, told Atlanta's 107.9 that he stopped child support payments because Kandi called his wife and told her about the baby.

Kandi, who had a reputation for being fast and loose with her goodies, fell pregnant with Riley while she was a member of Xscape.

Block dumped her soon afterwards - and now we know why. 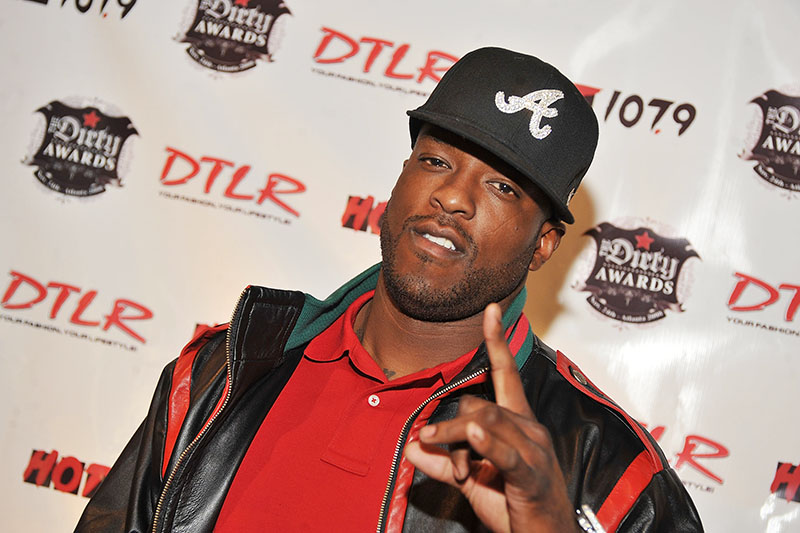 "When I was dealing with Kandi, I already had a family," said Block, who had 4 children at the time.

"So then I had a daughter inside of that. Then when you go behind my back and call my girl and tell her you pregnant, you gotta handle that beef yourself. My girl at home said b***h f**k you, you ain't coming here."

The promiscuous music exec said he paid child support for Riley until she was 14, and his current wife forced him to stop.

When September rolls around this year, the music manager and father of three will have two less mouths to feed.

Block took to social media over the weekend to celebrate the expiration dates of two of his child support obligations.

He shared a video clip of a man dancing, and captioned the video: "... me after september – officially getting rid of both dem baby mama's!!! 18 ya biiiiish!! – – strap up young homies! Get married !!"

His celebration was not appreciated by Kandi and her eldest daughter, Riley Burruss, who referred to her father as a "bum."

Riley, 18, and her dad have not spoken in years. "I feel like my father never really did anything. It's time for him to at least provide something when I'm going away to college," she said.

“Wasn't I like 15 when he came around and tried to start talking again? When you are only the bum father to me, it just kind of rubs me the wrong way because you had the capability to be there because I can see it with all your other children. I have the people around me who I'm already comfortable with, so I feel like I just kind of moved past the point where he’s necessary."

Block and his handsome wife are parents to a 3-year-old boy named King Cairo.

Kandi, 43, froze her last remaining eggs after she gave birth to Ace at age 39. The busy entrepreneur hired a surrogate to carry Blaze.

"It seems like just yesterday when @acetucker was small like @blazetucker. Time flies!," the proud mommy shared on Instagram.com. "I can't wait to see what the future holds for #blazetucker... My sunshine on a cloudy day."

She captioned another adorable photo of Blaze: "My youngest turned 3 months old yesterday! Time is flying by. I can’t wait to see what the future holds for @blazetucker."

My youngest turned 3 months old yesterday! Time is flying by. I can’t wait to see what the future holds for @blazetucker. ???

My sunshine on a cloudy day! @blazetucker ??

Kandi Burruss and her husband Todd Tucker have hired a surrogate to carry their baby daughter via IVF. Kandi and Todd are parents to 4-year-old son Ace Wells Tucker.

END_OF_DOCUMENT_TOKEN_TO_BE_REPLACED

Little Riley Burruss is only 13 years old, but she already towers over her mother, reality TV star Kandi Burruss, 44.

Riley grew up in the public eye, but sources say she is level headed, mature and intelligent. Riley inherited her height from her father, music industry veteran Russell "Block" Spencer.

END_OF_DOCUMENT_TOKEN_TO_BE_REPLACED

Bravo's Andy Cohen asked RHOA's Kandi Burruss to comment on her daughter Riley trending on Twitter.com last night. 'Riley is 11' trended on Twitter during Bravo's broadcast of Real Housewives of Atlanta, as viewers expressed disbelief that the youngster was only 11 years old.

END_OF_DOCUMENT_TOKEN_TO_BE_REPLACED

7th grader Riley Burruss covers Tiffany Evans' original song "I'll Be There". Riley is the daughter of RHOA star Kandi Burruss and industry veteran Russell "Block" Spencer of Block Entertainment. Riley has a strong voice for a kid so young. It's hard to believe she's only 12-years-old. She sounds a little nervous performing in front of a crowd, but her raw talent is unmistakeable.

END_OF_DOCUMENT_TOKEN_TO_BE_REPLACED

Kandi Burruss and her boyfriend Todd Tucker are officially engaged, according to Alwaysalist.com.

“I’m happy and very excited about building a future with Todd,” Burruss told AlwaysAList.com exclusively. “He makes me smile from the inside out!"

Burruss, 36, an accomplished singer/songwriter, met Tucker, 39, a line producer on the RHOA set during filming of season 4 in 2012. They were formally introduced by former celebrity attorney, and RHOA co-star, Phaedra Parks while filming an episode in Africa.

END_OF_DOCUMENT_TOKEN_TO_BE_REPLACED

Apparently what happened was, Kandi and her mother, Joyce, were guests on Bravo’s Watch What Happens Live, following the broadcast of last night's episode of RHOA.

The host, Andy Cohen, asked Kandi who she was crushing on, and Kandi responded, "Usher," because she had heard he could put it down in the bedroom.

Someone on Twitter relayed Kandi's comment to Tameka via tweet. Tameka responded, "Girl that doesn’t surprise me, there isn’t many left in town that she hasn’t so…… Go figure..."

Kandi immediately tweeted, "you on some real bullshit i see…. wow."

Tameka quickly followed up by inviting Kandi to "take it outside," so to speak. "See I like real live convos.. So anyone that wants to talk to me can DIAL or come SEE ME. I don’t play cyber games.."

Though it was snarky, what Tameka tweeted to Kandi wasn't far off the mark.

Everybody knows Kandi has been down that road with quite a few married, and taken, industry cats. It's no secret that Kandi's a slut who only pursues men in committed relationships.

Kandi's baby daddy, entertainment mogul Russell "Block" Spencer, had a girlfriend and kids at home when he sired Kandi's daughter. The chick has no morals, yet she calls herself giving advice to other clueless baby mamas online.

Read the tweets after the break.