Facebook has deleted thousands of comments and banned trolls who taunted Lizzo's wight and made racist comments about her.

The "Truth Hurts" singer broke down and wept in a YouTube video after trolls hurled "fatphobic and racist" remarks about her new single "Rumors" featuring Cardi B.

YouTube users rated the single a flop and called Lizzo "mammy" because she portrayed a goddess in the music video.

READ ALSO: Lizzo breaks down in tears (again) on YouTube

Wearing a stocking cap on her head and wiping tears from her eyes, Lizzo said:

"On the days that I should be the happiest, I just feel so down... I work so hard. I've been working triple time... doing 12 hours a day of promos and interviews... going to the studio with a f**king root canal...

"I'm putting so much love and energy into the world, and sometimes I feel like the world don't love me back."

The 33-year-old songbird returned to the Internet on Tuesday, after Facebook took action against her tormenters.

She thanked supporters for their positive energy and said it was "important" for her to express her anxiety and depression that day.

"We really need to check ourselves and how we treat people," she said.

"I'm not crying for me. Yeah, I'm successful, I'm happy, I strive for joy every single day. I'm balanced, I'm blessed. But I just be feeling for the world. This sh-t ain't right. We shouldn't talk to people like that. We shouldn't normalize treating people this way."

According to TMZ, Facebook officials banned the accounts of trolls from both social media sites.

They will continue to monitor Lizzo's timelines and remove toxic comments, so the fragile singer doesn't end up in a mental hospital. 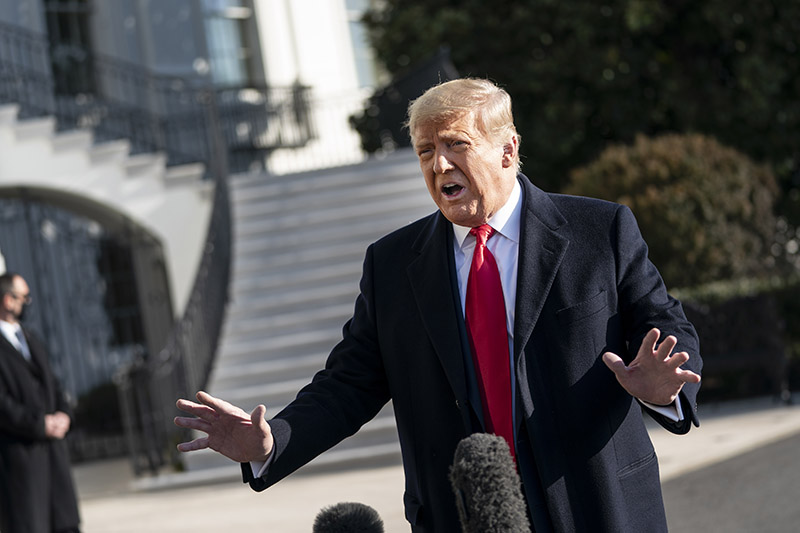 After spending a few days golfing at his Florida resort, President Donald Trump returned to Washington, DC, and spoke for the first time since the Capitol riots.

Speaking to a small pool of reporters outside the White House on Tuesday, Trump warned Democrats that their efforts to impeach him for a second time is "causing tremendous anger" among his base.

House Democrats introduced articles of impeachment on Monday, saying they have enough votes to impeach Trump on Wednesday, Jan. 13, just days before his term as President is set to end.

Trump said the impeachment is "a continuation of the greatest witch hunt in the history of politics."

"We want no violence," he said, before adding that his January 6th speech was "totally appropriate."

5 people died in the clashes at the Capitol building after Trump's fiery speech in DC on Wednesday. Among the dead is a 14-year Air Force veteran who was shot in the neck by a DC cop.

The FBI says armed protests are set to take place in all 50 states prior to the inauguration on January 20.

Trump boasted, "we have support probably like nobody's ever seen before."

The President condemned the social media blackout and said he warned his followers he would be banned on Twitter and Facebook.

"This will be a catastrophic mistake for them," he said. "They are dividing and divisive."

Americans are waking up to the sobering news that America has no functional leadership at the moment. The President of the United States, Donald Trump, is missing in action.

The nation is divided as lawmakers point fingers at each other, saying laptop thefts from the offices of top Democrats during last week's Capitol riots was an inside job.

The head of the Capitol police resigned days after the January 6 protests, and a DC police officer who was assigned to protect the Senate wing during the riots took his own life on Saturday.

Thousands of national guard boots are on the ground in Washington, DC. There is fear of an imminent attack by foreign countries, as the U.S. government collapses.

Powerful generators were installed on the grounds of the Capitol building -- in case a nuke takes out DC's power grid.

Singer Keri Hilson called for her peers to wake up and see the bigger picture -- that suppression of freedom of speech of a world leader is a threat to all of us.

"This may be funny, but it is a little dangerous too. Take Trump out of it for a moment... A Democracy must include freedom of speech. Imagine other leaders or popular figures not being able to voice their opinion if it opposes the majority of world leaders... Our freedom of speech being taken from us, slowly but surely (censorship). If the leader of the "free world" can be removed, imagine that same right of civilians. Imagine believing every time you read "false information detected" and propaganda, deceptive reports, and flat out lies being the only thing we see."

A statement from Zuckerberg reads, "We believe the risks of allowing the President to continue to use our service during this period are simply too great. Therefore, we are extending the block we have placed on his Facebook and Instagram accounts indefinitely and for at least the next two weeks until the peaceful transition of power is complete."

The news comes as Twitter restored Trump's account after suspending him for 12 hours when he pleaded with MAGA supporters to leave the U.S. Capitol.

Four protesters were killed during rioting, including Air Force veteran Ashli Babbitt, 37, who was shot in the face by a DC police officer when she and others forced their way through a locked door inside the Capitol building on Wednesday.

Trump is communicating with his followers via his official accounts on conservative platforms GAB and Parler.

Trump has promised an "orderly transition" of power after President-elect Joe Biden won the majority electoral college vote on January 6, 2021.

The outgoing President, who has repeatedly accused the Democrats of orchestrating a coup against him and stealing the November 2020 election, issued a statement on Thursday.

"Even though I totally disagree with the outcome of the election, and the facts bear me out, nevertheless there will be an orderly transition on January 20," Trump confirmed.

"I have always said we would continue our fight to ensure that only legal votes were counted. While this represents the end of the greatest first term in presidential history, it's only the beginning of our fight to Make America Great Again."

Instagram has changed its TOS again -- this time cracking down on sex workers who use the photo sharing platform to advertise their services.

Instagram's new terms of service went into effect on Sunday, Dec. 20. The new TOS cracks down on any nudity and "adult commercial sexual services or prostitution activities."

"Nudity" is defined as the state or act of being naked (full frontal nudity).

That new TOS will affect OnlyFans models sharing urls to their OnlyFan accounts, as well as rappers who post sexually explicit content on the platform where the majority of users are adolescents and minors.

You can either lose your login or keep it classy like @symply_tacha, who has 1.5 million followers.

Tacha's page is filled with photos of herself fully dressed. Whenever she does show a little skin she leaves a lot to the imagination.

Instagram also cracked down on people requesting or offering or asking rates for escort services and paid sexual fetish or domination services.

In other words, if you wouldn't say it to your mother or grandmother, don't say it on Instagram.

Freddie Gibbs is among the raunchy rappers who lost his login after the new TOS went into effect on Sunday.

Gibbs announced his banishment on Twitter.com on Monday, writing, "I just got banned from gram [sic]. Instagram banned me when I got my super powers," he added in reference to the rumor that Black people gained super powers on winter solstice (Dec. 21).