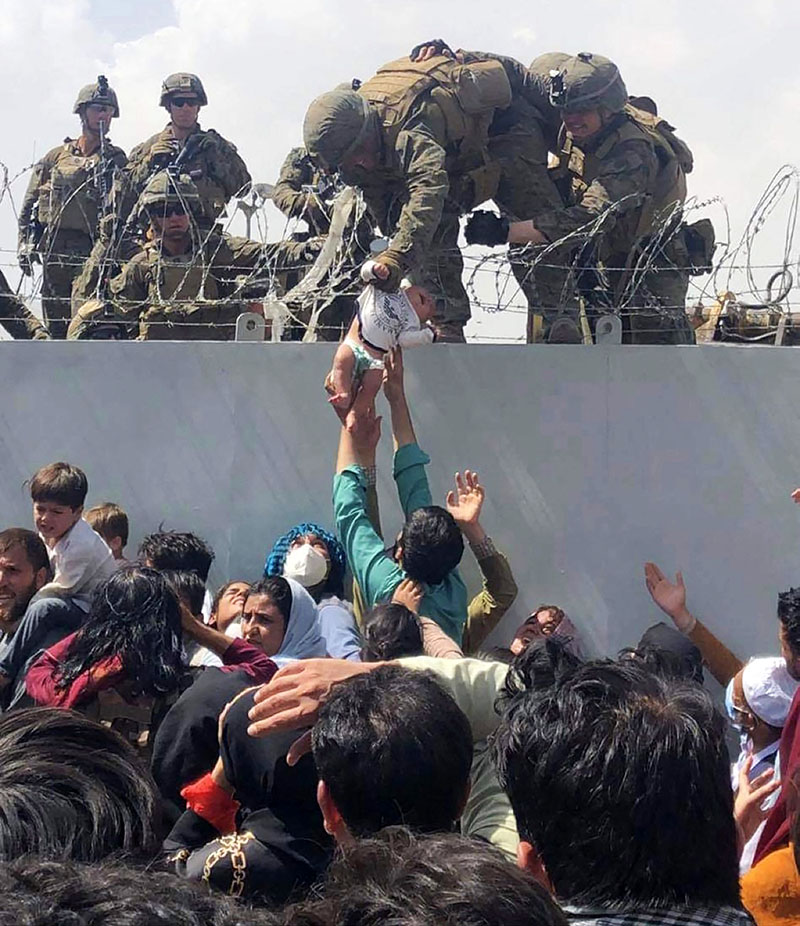 The image of a crying baby being lifted over a razor wire fence by a marine symbolized the desperation of the Afghan people.

In the viral photo, a marine is seen lifting a baby girl over the razor wire fence after her parents begged the marines for medical help.

The baby was suffering from the effects of tear gas fired by soldiers to disperse the crowd.

The baby was later reunited with her father.

Afghans were photographed handing their children to American and British soldiers as thousands of people stampeded outside the Kabul airport on Friday (see video below).

The tragedy unfolded last week when U.S. Pres. Joe Biden made the decision to pull troops out of Afghanistan after 20 years occupying the region.

Ex-British prime minister Tony Blair called Biden an "imbecile" over his decision to order the troops out of Afghanistan. Blair urged Biden to extend the deadline for withdrawal. 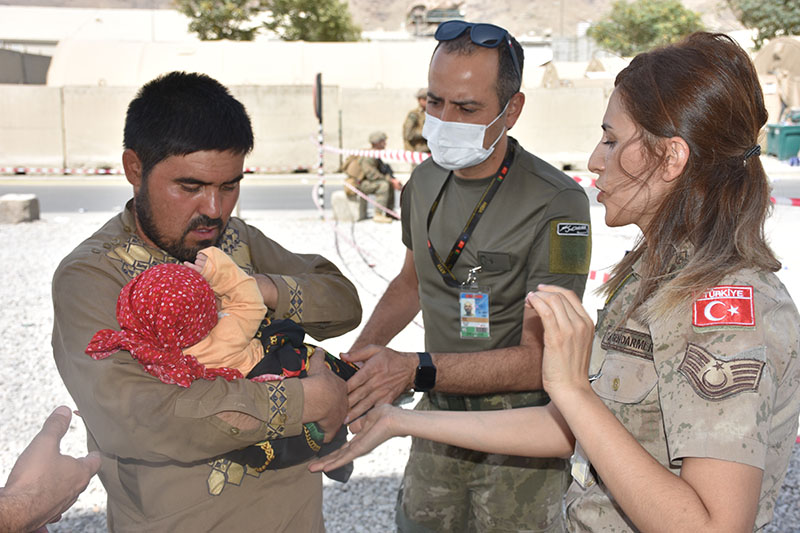 A photographer captured the moment when another baby was reunited with her parents who had earlier handed her to soldiers in desperation. The family later boarded an evacuation aircraft out of Kabul. 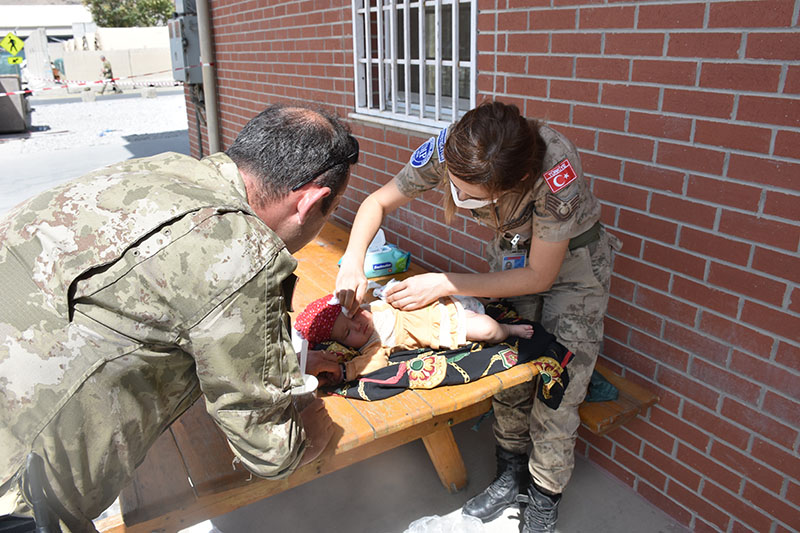 Turkish soldiers cared for the children at a clinic inside the airport before reuniting them with their anxious parents. 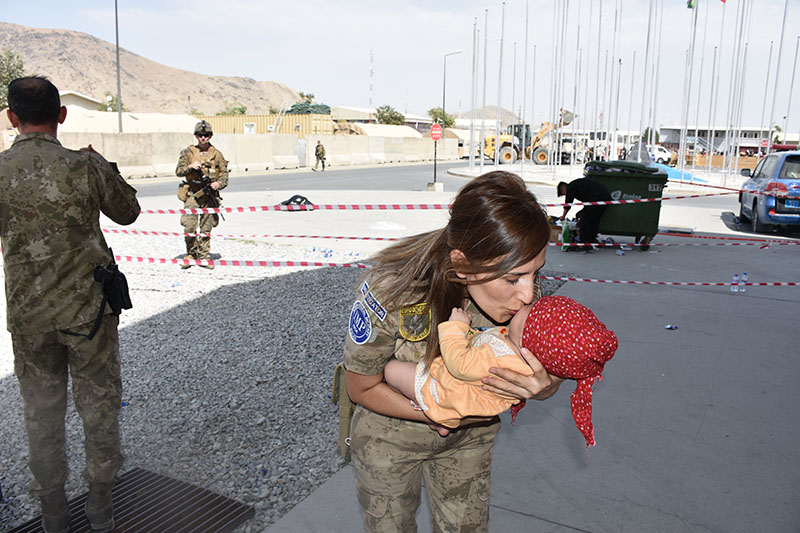 A Turkish soldier is pictured kissing a baby refugee before reuniting her with her parents. All of the children were reunited with their parents.

Dozens of people were shot by the Taliban or crushed in the stampede outside the Hamid Karzai International Airport in Kabul on Saturday. 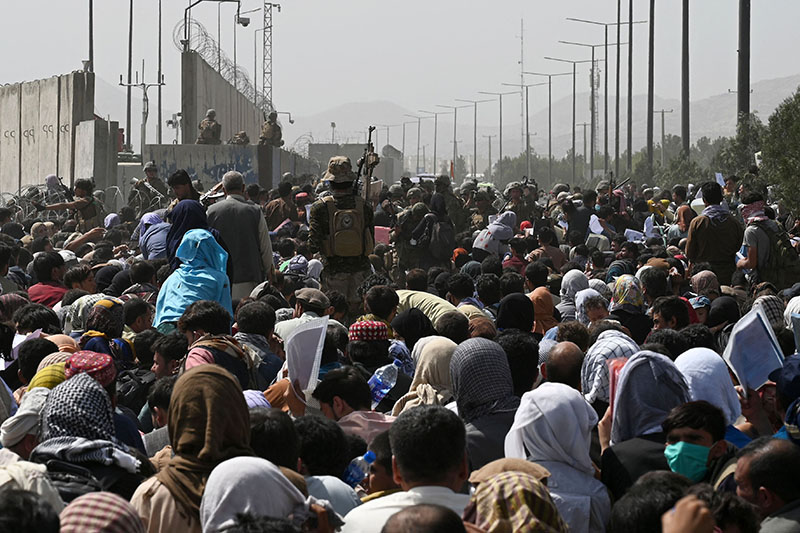 The desperation intensified Saturday as word spread that mercy flights out of Kabul will end in a few days.

Thousands of Afghan people have descended on the Kabul airport over the past week desperately hoping to flee Taliban-controlled Kabul. 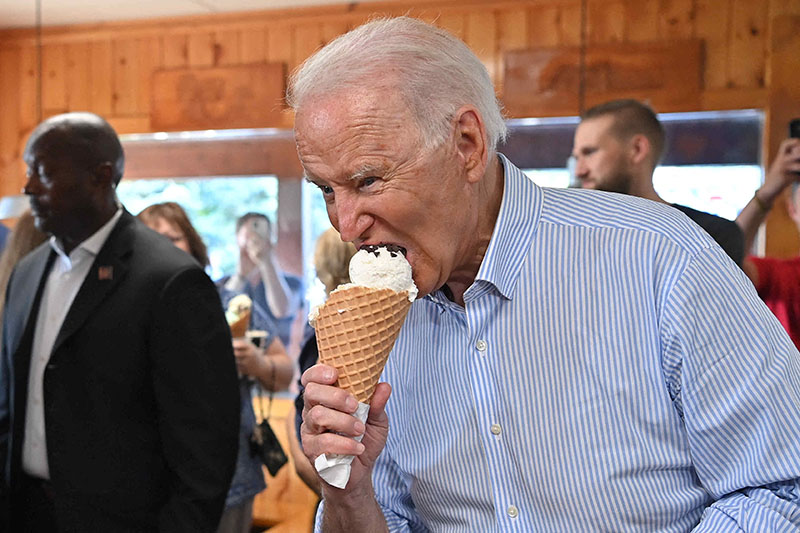 The Taliban sent Joe Biden a message by posing for a photograph, which shows them holding ice cream cones. pic.twitter.com/HEwp8Xy8ld

Biden is known for eating ice cream and posing for photo ops with ice cream cones in both hands.

Afghan media reports the fighters were mocking a "weak" Biden after the Taliban took control of Afghanistan.

Can't wait for the White House "journalists" to ask Joe what flavor ice cream goes best with a Taliban takeover. 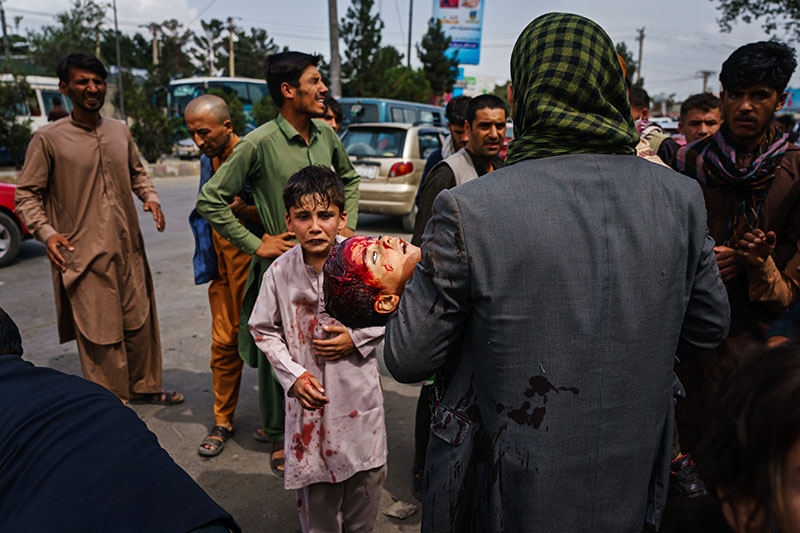 Americans are horrified by images and video of women and children injured or dead at the Kabul International airport. 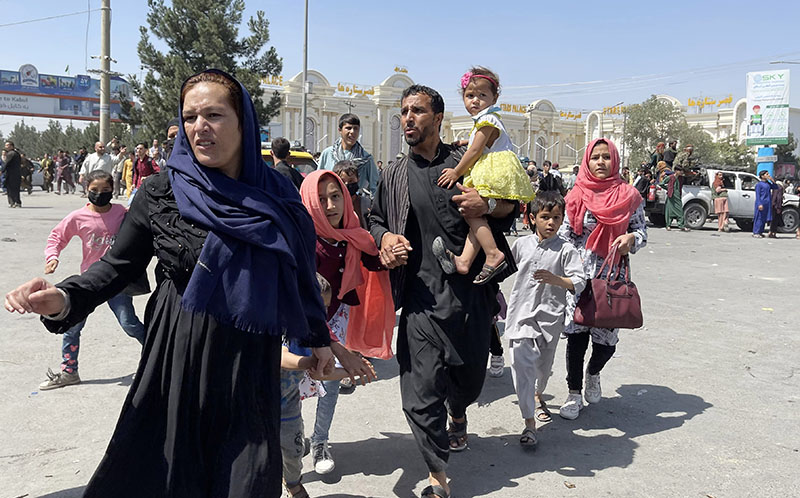 Families leave all their possessions behind and flee to the airport, desperate to get on evacuation planes.

Thousands of Americans are still trapped in the fallen country. There are reports of "forced marriages" between Taliban fighters are adolescent girls. 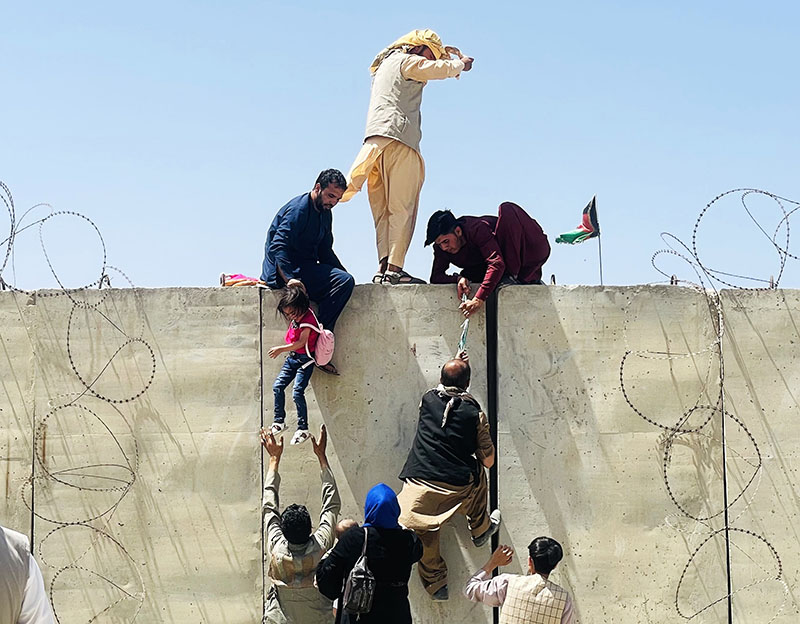 Despite the mocking tweets, Twitter says the Taliban can stay on the platform as long as they don't incite violence.

In a statement to Mediaite.com, Twitter said its "top priority is keeping people safe, and we remain vigilant."

Conservative lawmakers noted that the Taliban has Twitter accounts but Donald Trump is still banned.

"Why on God's green Earth does the Taliban spokesman have an active Twitter account but not the former President of the United States?," Rep. Madison Cawthorn (R-NC) tweeted Sunday. 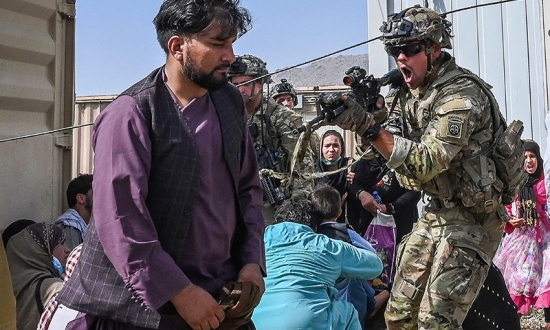 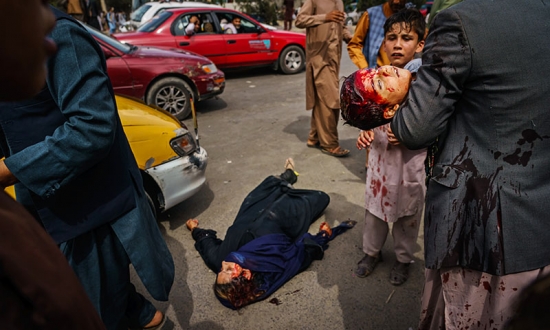 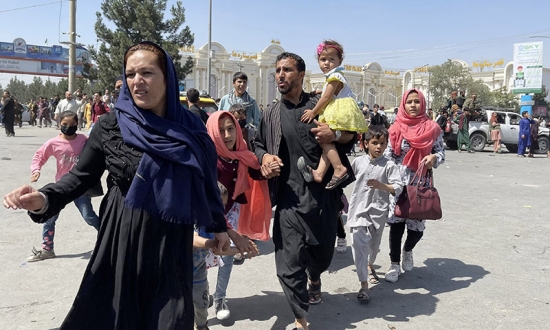 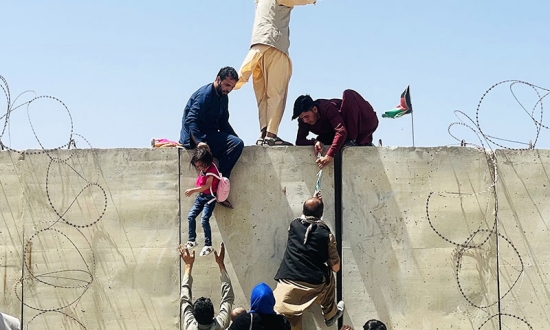 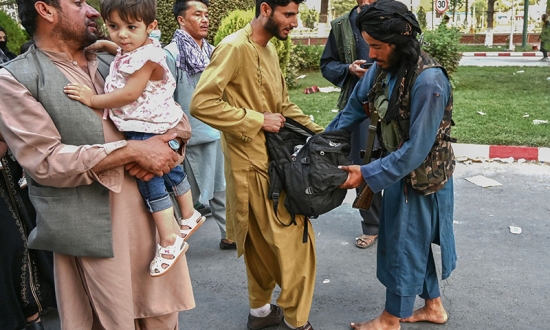 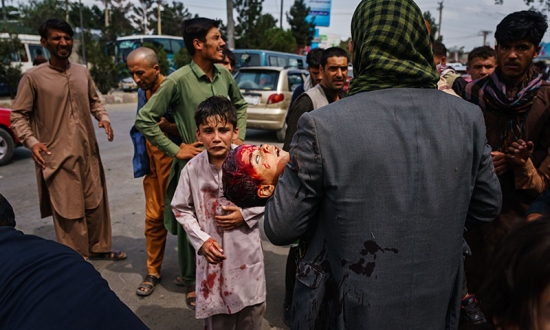 About 500 children and teachers were inside the Army Public School in Peshawar at the time of the terrorist attack.

END_OF_DOCUMENT_TOKEN_TO_BE_REPLACED

As many as 14 U.S. soldiers may have lost their lives searching for Sgt. Bowe Bergdahl, a traitor who deliberately deserted his army post in Pakistan 5 years ago.

President Barack Obama has come under fire for negotiation with the Taliban terrorist organization for Bergdahl's freedom. In exchange for bringing the traitor home, Obama agreed to release 5 dangerous Taliban terrorists from Guantánamo Bay, the American detention camp in Cuba.

Sondra Andrews’ son, 2nd Lt. Darryn Andrews, is one of five soldiers who was killed searching for Bergdahl.