I bumped into rap mogul Chris "Ludacris" Bridges, his girlfriend, Fab, and her friend yesterday at Phipps Plaza in Atlanta. We had a long conversation about blogs fabricating stories about Luda and Fab. More specifically, about how my blog influences the things other blogs write about.

Luda made it clear that he expected way more from me because he and I go way back to the days when I was a photographer and he was DJ Chris Lova Lova on Hot 97.5 (now 107.9).

The bottom line is, Luda and Fab are not ready to marry just yet -- and when they do get married, everyone will know. They simply refuse to allow outside forces to influence their decisions. Luda stressed to me that he LOVES Eudoxie very much, and he would do anything for her.

I was happy to meet Eudoxie for the first time. She cleared up a few things, such as her name: she goes by "Fab" because her middle name is Fabiola; and the fake Facebook page that everyone, including me, thought was her. She said "Agnan" is not her last name, and she has no idea who created the fake page. 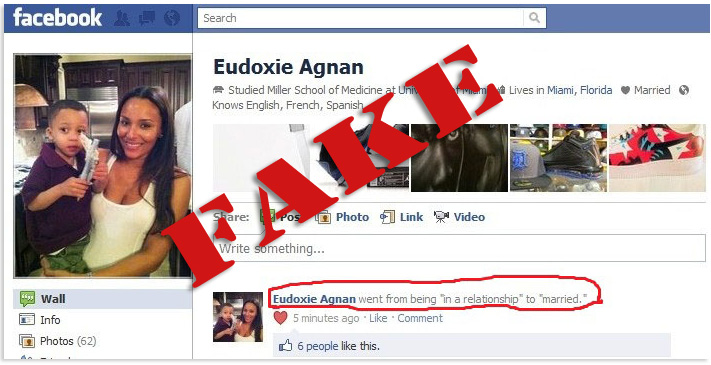 Fab's real Facebook page is in French, and it is private. She only has about 200 Facebook friends who are friends and family.

She was so sweet! She took out her cell phone to show me pictures of her childhood. Fab proudly showed me pics of her mom, Jermaine, holding her as a toddler in Gabon, in Africa! I asked her if she would send it to me, and I was surprised when she agreed.

Check out the picture she sent us Exclusively after the break!

Fab also showed me pics of herself when she was a toddler posing with her cousins in Africa. She said she knew she was "different" from a very young age, and because of that, she moved away to live with her uncle. Fab is still a medical student, but she has taken a break from her studies. Ludacris and Fab have been together for four years now. Hopefully, she will agree to be interviewed in the near future!