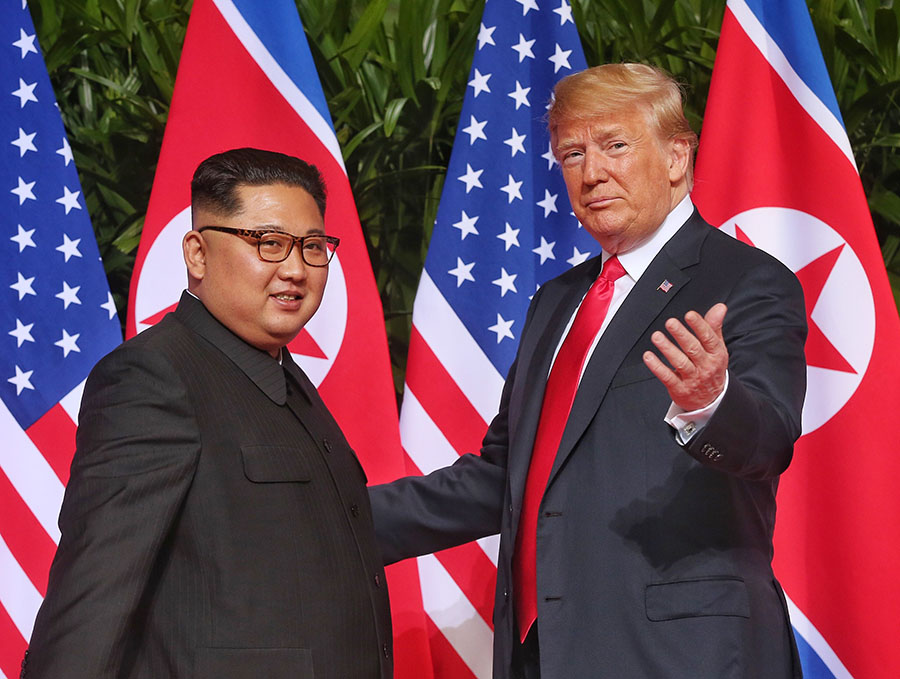 The two world leaders exceeded expectations by signing a peace agreement that stunned the world. 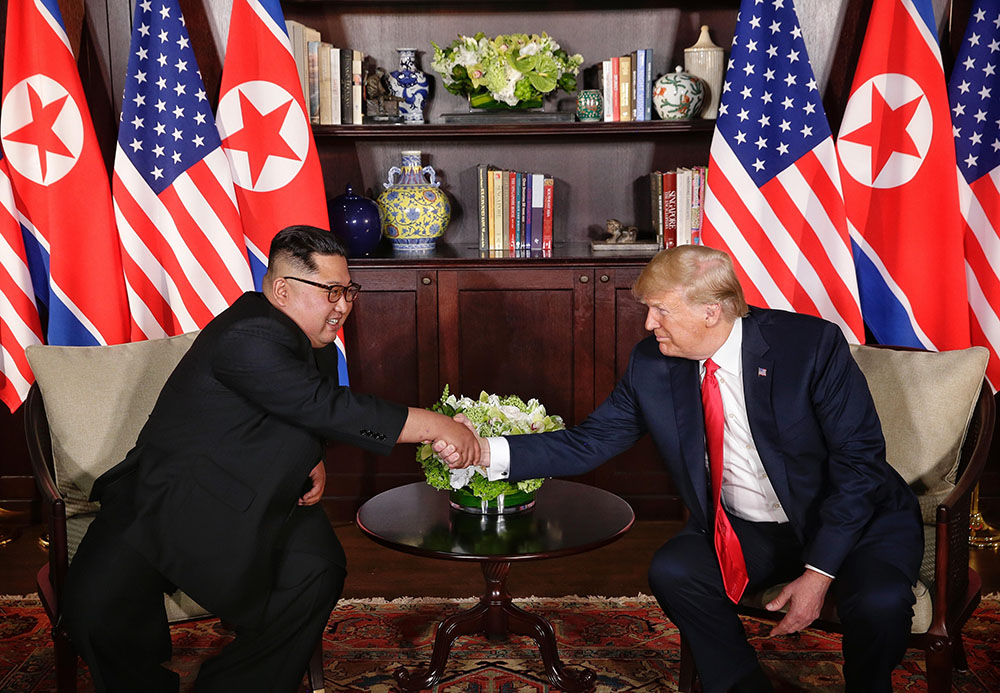 Just 4 months ago, Americans braced themselves for a catastrophic nuclear attack as the war of words between President Trump and Kim Jong Un escalated to petty insults and threats of annihilation.

No one could predict that Trump and Kim would sign an agreement to remove nuclear weapons and end hostilities in the Korean peninsula — an agreement that was impossible under previous U.S. presidents.

Many observers called the historic signing of the peace document “unprecedented” and “unbelievable.”

While you were sleeping: Kim Jong-Un formally agreed to complete denuclearization of the Korean Peninsula and return of American POW/MIA remains. #TrumpKimSummit pic.twitter.com/24CEY8JMvr

Trump and Kim met each other face-to-face for the first time at the Capella Hotel on Santosa Island in Singapore on Tuesday June 12, 2018 just after 9 a.m. local time. They shook hands and the two men met in private with their translators for about 45 minutes.

Kim’s translator said he told Trump, “Many people in the world will think of this as a form of fantasy from a science fiction movie.”

Trump reportedly asked photographers at the summit to make sure pictures show them “handsome and thin”. 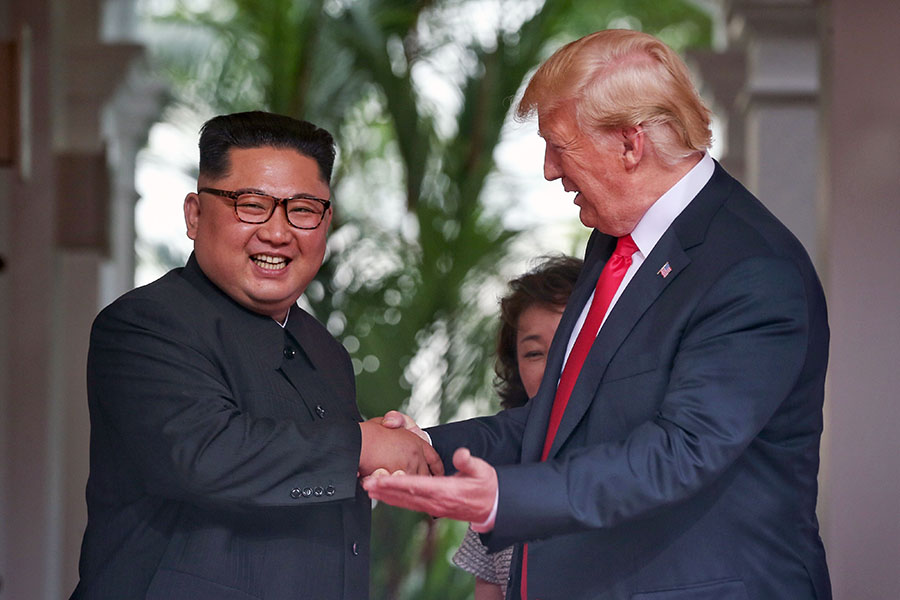 After their private meeting, President Trump and Kim joined their senior advisors for a working lunch just down the hall.

“I feel really great. We’re going to have a great discussion,” Trump said, “and tremendous success, going to be tremendously successful. And it is my honor and we will have a terrific relationship ahead.”

The leftist media immediately attacked Trump for saying it was an “honor” to meet the murderous dictator. The conservative media responded with ridicule at the left, saying, they would rather have nuclear war than to see President Trump succeed.

Kim said via a translator: “It was not easy to get here,” adding that “old prejudices and practices worked as obstacles on our way forward, but we overcame all of them and we are here today.”

Trump said they would work together to solve the nuclear disarmament problem to rid the Korean peninsula of nuclear weapons.

“There will be challenges ahead, but we will work with Trump,” Kim responded.

No one could foresee that just under 2 hours later, the two leaders would actually solve the “problem” by signing an agreement to remove nuclear weapons from North Korea.

At a press conference after the historic signing of the document, President Trump said he discussed human rights violations with Kim “pretty strongly” — and that the North Korean leader “wants to do the right thing”.

The main course consisted of beef short rib confit served with potato dauphinois and steamed broccoli with red wine sauce on the side.

Also on the menu was a combination of sweet & sour crispy pork and Yangzhou fried rice with homemade XO chili sauce. They washed it all down with a selection from the fine wine list and bottled water.

Then they strolled through a courtyard outside the hotel where President Trump dropped the first hint that a historic moment was about to occur. He mentioned something about a “signing” — which sent the media into a frenzy of speculation.

Moments later, Trump showed Kim the inside of his armored Cadillac presidential limo, called “the beast”, that travels the world with him.

After his historic meeting with Kim Jong Un, President Trump gave Kim a peak inside "the Beast" — his limousine. pic.twitter.com/bo4LotxpLM

Less than an hour later, the two world leaders sat down to sign the peace agreement that stunned the world. 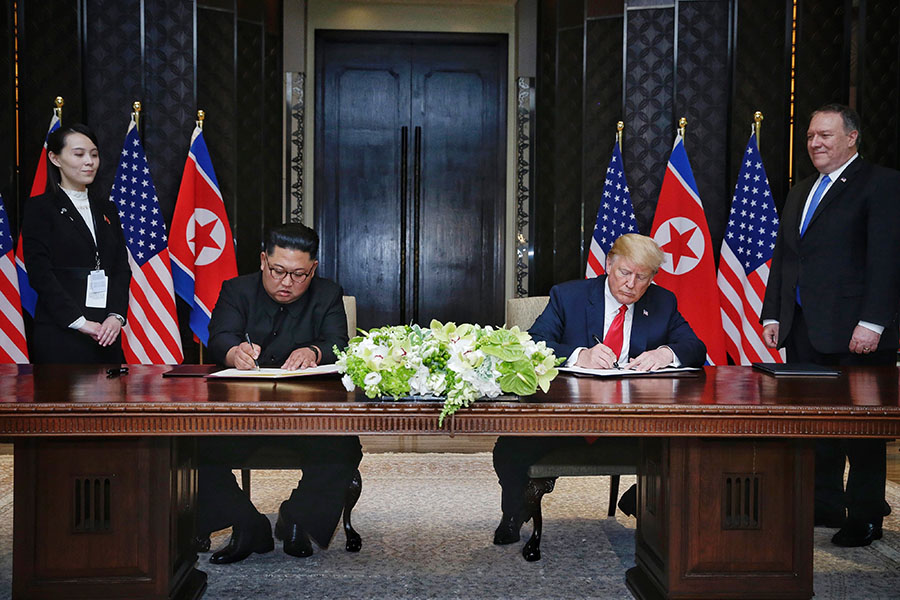 In the historic document, Trump and Kim agreed to: 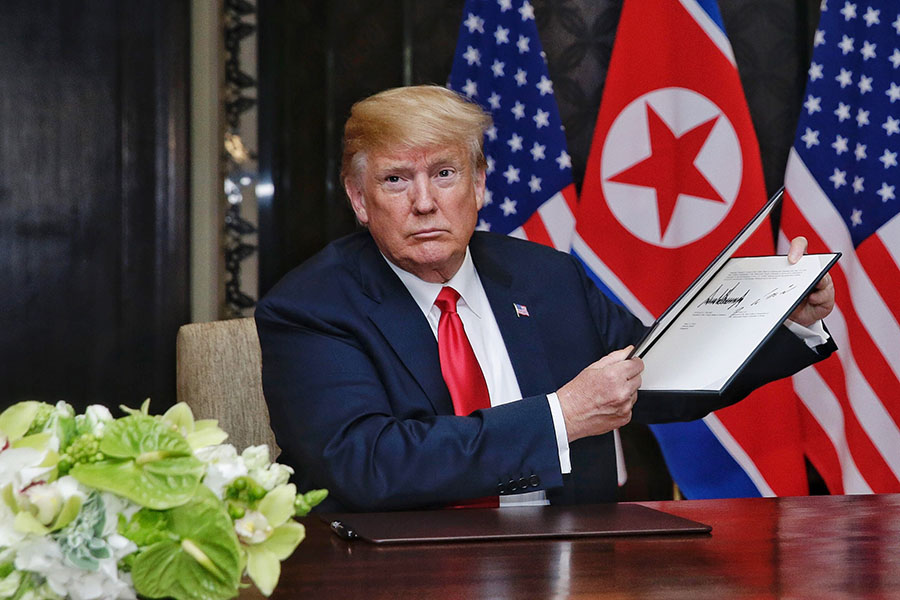 The signing of a peace agreement came as a total surprise to many outside of Trump’s inner circle. Not even the U.S. military knew what was about to happen.

Many families of American prisoners of war thanked Trump for doing what no other U.S. president had done in 70 years.

The response to the historic summit was typically divided along political party lines on Twitter.com.

Not only did North Korea get their wish, in meeting with a U.S. President, but now Trump agrees not to partake in war training exercises with South Korea? What exactly has Chariman Kim Jong Un given America other than shutting down already destroyed nuclear sites? #TrumpKim

Rough translation of what Kim & his generals said after meeting:
Generals: Why did U sign the document before we had a chance to read it?
Kim: I couldn't help it, he's just so GOOD at this! I think I agreed to give up my nukes and buy a timeshare condo at a Trump resort!

Like him or not, @realDonaldTrump is a perfect example of when you believe in yourself, anything is possible. #TrumpKimSummit pic.twitter.com/scic8COvtz

If you had shown me this picture in 2014 I would have congratulated you on your seamless Photoshop skill. #TrumpKimSummit pic.twitter.com/Mmijcnwxmv

"AND LIBERALS SAID TRUMP WAS GOING TO LEAD AMERICA INTO A
NUCLEAR WAR. HE PROVES
THEM WRONG AGAIN…" Congratulations President @realDonaldTrump #TrumpKimSummit pic.twitter.com/IIiAwIqKNP

I find it pathetic that there are Americans that are so blinded by hate that they seriously hope Trump fails to get NOKO to de-nuke. What in the world is wrong with these people? #TrumpKimSummit

Two mentally unstable pathological liars have signed a joint statement that neither of them has any intention of honoring. Take note of the political reporters who are praising this bullshit, and never listen to them again. #TrumpKimSummit

Trump got Kim Jong Un to promise to return the remains of American soldiers in North Korea to America. They are finally coming home to rest. #TrumpKimSummit

I miss Obama. I really do. Especially after listening to this painful, embarassing and terrifying Trump presser. #TrumpKimSummit

Surreal to watch Trump cozy up to a dictator who murdered Otto Warmbier and threatened to nuke America, just days after viciously attacking our closest allies — even those who came to our aid during 9/11. #TrumpKimSummit

When you get elected prom king and prom queen, but you broke up the night before. #TrumpKimSummit pic.twitter.com/qcndCTOweW 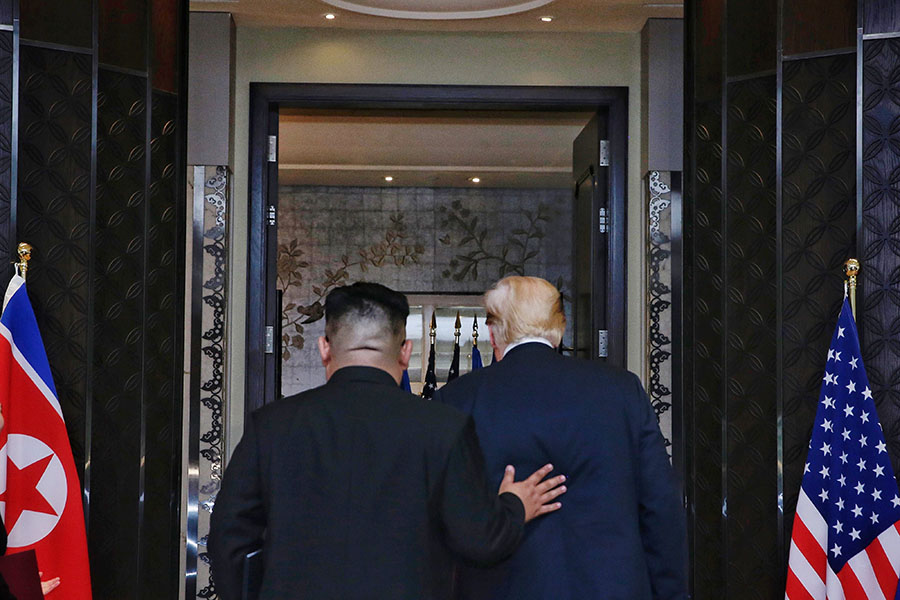 Celebs Out & About: Tamar Braxton and Vincent Herbert