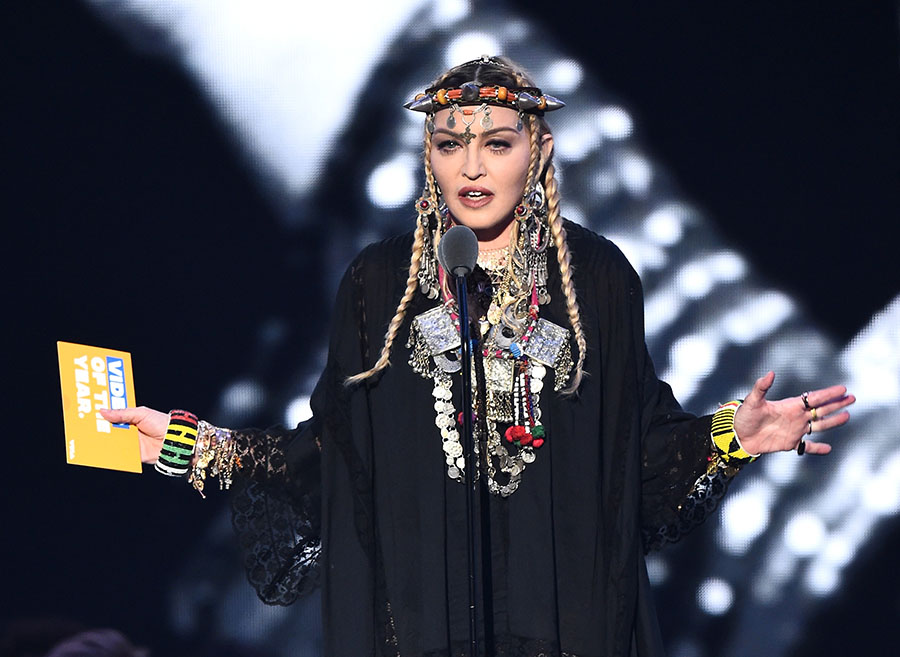 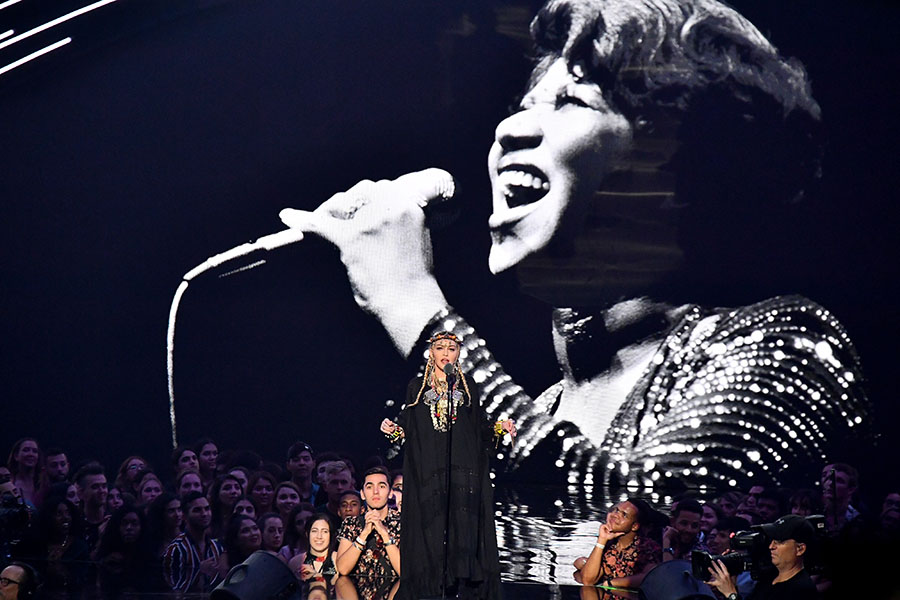 “Aretha Louise Franklin changed the course of my life,” Madonna said onstage. “I left Detroit when I was 18 — 35 dollars in my pocket. My dream was to make it as a professional dancer. After years of struggling and being broke, I decided to go to auditions for musical theater.”

With a giant image of Aretha on the screen behind her, Madonna told a long, rambling story about how she struggled during her early hand-to-mouth days.

“I had no training or dreams of ever becoming a singer but I went for it,” she said.

“I got cut and rejected from every audition — not tall enough, not blend-in enough, not 12-octave range enough, not pretty enough. Not enough. And then one day a French disco sensation was looking for backup singers and dancers for his world tour. I thought, ‘Why not? The worst that can happen is I can go back to getting robbed, held at gunpoint and being mistaken for a prostitute in my third floor walkup that was also a crackhouse.’ That’s right, I’m a Rebel Heart.”

“So I showed up for the audition and two very large French record producers sat in the empty theater, daring me to be amazing. The dance audition went well. Then they asked me if I had sheet music and a song prepared. I panicked. I had overlooked this important part of the audition process. I had to think fast, my next meal was on the line. Fortunately one of my favorite albums was Lady Soul by Aretha Franklin. I blurted out ‘You Make Me Feel’… silence. ‘You Make Me Feel Like a Natural Woman.’ Two French guys nodded at me. I said, ‘You know, by Aretha Franklin.'”

“They looked over at the pianist, he shook his head. ‘I don’t need sheet music,’ I said, ‘I know every word. I know the song by heart, I will sing it a cappella.’ I could see that they did not take me seriously — and why should they? Some skinny ass white girl is going to come up here and belt out a song by one of the greatest soul singers that ever lived? And a cappella? I said, ‘Bitch, I’m Madonna.’ No, I didn’t, I didn’t say that. ‘Cause I wasn’t Madonna yet. I don’t know who I was. I don’t know what I said, I don’t know what came over me.”

By this time the MTV audience begins to stir. Madonna was taking way too long to get to the Aretha tribute part.

Is this a tribute to Aretha Franklin or Madonna's story #VMAs pic.twitter.com/SF8j7Ycu8w

“So you’re probably all wondering why I’m telling you this story? There’s a connection, because none of this would’ve happened — could’ve happened — without our lady of soul. She led me to where I am today and I know she influenced so many people in this house tonight, in this room tonight, and I want to thank you, Aretha, for empowering all of us. R-E-S-P-E-C-T. Long live the queen.” 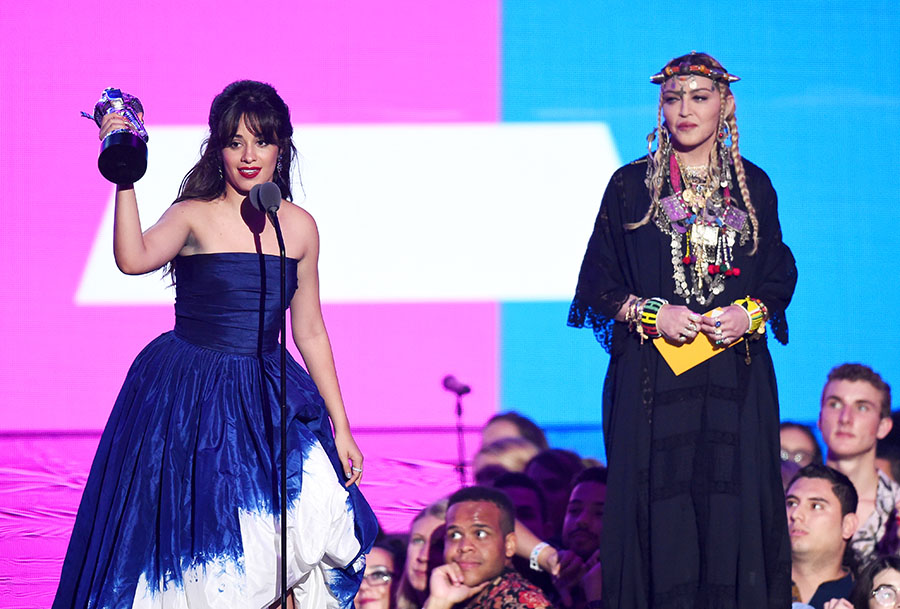 Madonna finally presented the award to Cabello — who turned around and dedicated the moon man to her idol, Madonna.

But Black Twitter was not having the disrespect Madonna showed to Aretha. The angry tweets came fast and furiously:

Madonna made Aretha Franklin's death about herself and her own musical journey, and honestly, this is some of the whitest shit I have ever seen. #VMAs

MTV: Can you say a few words about Aretha Franklin ?

Madonna: no problem lemme just talk bout myself for a while tho first

Prince is up there telling Aretha she effed my tribute up too!! #Aretha or Madonna pic.twitter.com/AUdiDpOMBN

Aretha is up in heaven listening to Madonna talk, like…#VMAs pic.twitter.com/PIKaubSl2B

Madonna, is this about you or Aretha or the person you're giving the award to? #VMAs pic.twitter.com/4L663EcSIs

Madonna really gentrified an entire tribute to Aretha with more anecdotes than a Presidential candidate. You gotta be kidding me… #VMAs

Say what you want about BET… they would’ve done a way better Aretha Franklin tribute. This Madonna speech is reprehensible.

Who keeps letting Madonna do tributes? I am still mad at her for the Prince one. Aretha or Madonna? Definately Aretha…Madonna needs to sit down somewhere…foreva RIP Queen of Soul

Camila Cabello got on her knees and praised Madonna and dedicated her undeserved Video of the Year award to her……after Madonna just gave a self-indulgent "tribute" to Aretha Franklin.

And that describes how #VMAs treated Black artists the entire night…

Aretha dying on Madonna's 60th birthday was her final stunt.