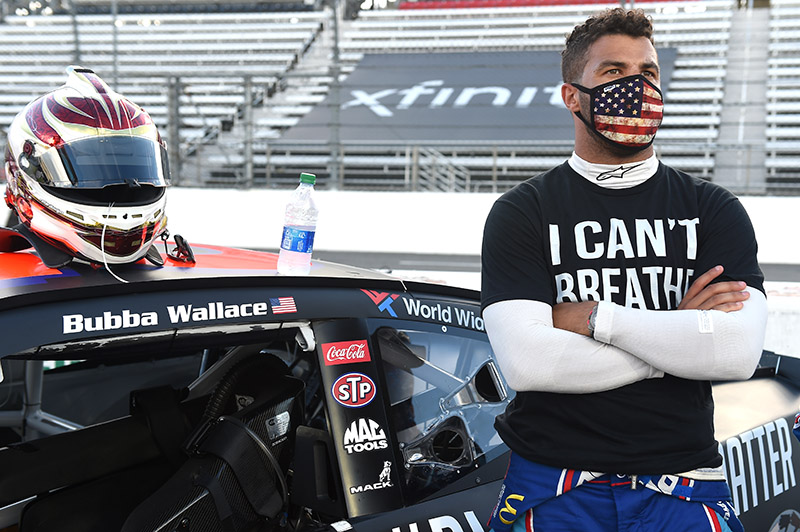 LeBron James was among the athletes who voiced their outrage over the news that someone hung a noose in the garage stall of NASCAR's Bubba Wallace.

The incident happened at the Talladega Superspeedway in Talladega, Alabama on Sunday. The noose was observed by a team member. Wallace did not see the noose.

"Sickening! @BubbaWallace my brother!" James tweeted on Monday. "Know you don't stand alone! I'm right here with you as well as every other athlete. I just want to continue to say how proud I am of you for continuing to take a stand for change here in America and sports! @NASCAR I salute you as well!"

NASCAR said it launched an immediate investigation and will do everything possible to find the perpetrator and "eliminate them from the sport."

NASCAR previously announced the Confederate flag would no longer fly at any of its events or racetracks after Wallace complained about them.

The decision angered redneck drivers who proudly cling to their Confederate flags and tins of chewing tobacco.

On Monday, Wallace tweeted: "Today's act of racism and hatred leaves me incredibly saddened and serves as a painful reminder of how much further we have to go as a society and how persistent we must be in the fight against racism."

He added: "As my mother told me today, 'They are just trying to scare you.' This will not break me, I will not give in nor will I back down. I will continue to proudly stand for what I believe in."

Wallace is the only full-time Black or biracial driver in NASCAR's elite Cup Series.