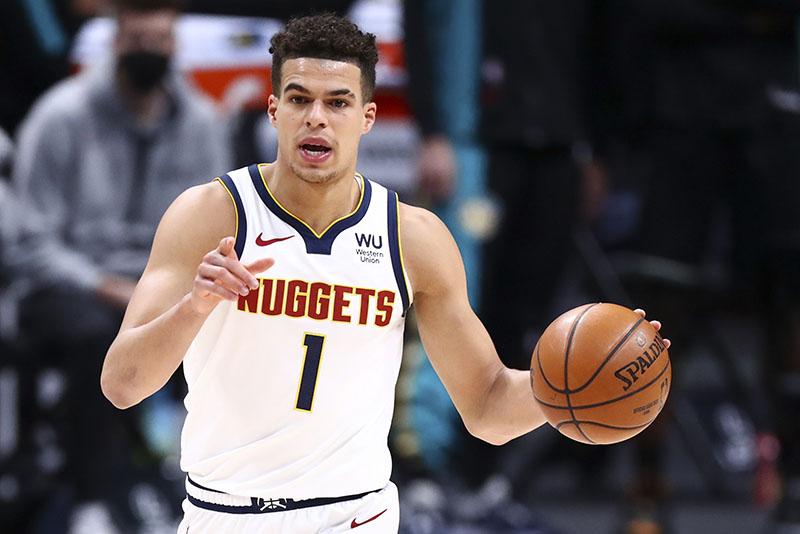 Michael Porter Jr. has joined a coalition of NBA stars who refuse to get the Covid-19 mRNA vaccine.

The 6'10", 23-year-old star took questions from reporters during training camp in San Diego on Wednesday.

Porter told The Denver Post he doesn't want the vaccine because he had Covid-19 twice and he doesn't know what's in the mRNA vaccine.

"I've had [COVID] twice, and I don't know what's going in my body with a shot, so if I already know how I'm going to react to COVID, I just feel like, for me, I don't want to risk putting something that might affect me negatively in my body."

Porter added that he is opposed to a league vaccine mandate, preferring instead to leave the decision to the players.

"My stance on the mandate is it definitely shouldn't be a mandate. It should be everyone's decision. I see it both ways. If you want to get it because you feel more protected and you feel safer, and it's protecting people around you, get it. That's good for you. But if you feel like, 'Oh, for me, I don't feel safe getting it, then don't get it.'"

Porter isn't the only unvaccinated Nuggets player on the team.

"Would I love to be able to sit here and say that we're 100 percent vaccinated? I would be thrilled about that," coach Malone said.

"All we can do is try to help educate the players that have chosen to be unvaccinated to this point. Maybe at some point, they realize what's at stake and they make that decision to get vaccinated. Until then, we'll keep on trying for sure."

I stand with Kyrie Irving.

I stand with Andrew Wiggins.

I stand with Bradley Beal.

I stand with Jonathan Isaac.

I stand with Michael Porter Jr

Flagging this as vaccine misinformation because I don’t know who Michael Porter Jr is https://t.co/GqBzGIjjvh

Michael Porter jr was minding his business now everybody coming for him because TMZ said he’s one of the NBAs biggest stars ?