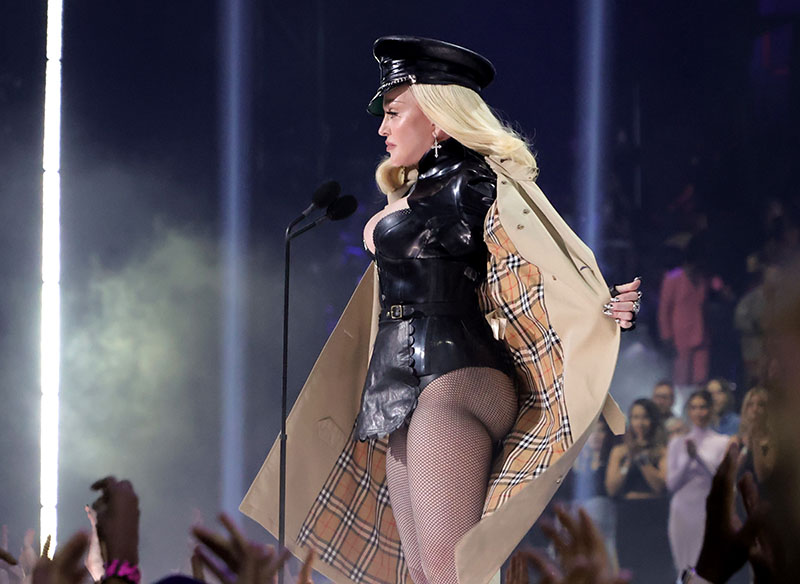 The pop icon's enhanced booty stopped traffic outside the 2021 MTV VMAs, held at the Barclays Center in New York City.

The Queen of Pop made a surprise appearance to open the MTV VMas, where she showed off her firm bubble butt in a one-piece thong bustier and matching cap. The 63-year-old mother-of-6 accessorized her edgy outfit with black fishnet stockings and f-- me pumps.

The Internet exploded as Madonna confidently strut across the stage. Many fans accused the singer of having a BBL done.

Some fans said they could tell she had a BBL done because her legs didn't match her new butt.

I was a Madonna fan at the beginning. Where did that come from?

I guess we're all lucky that ass didn't actually fall off and onto the stage, although that would have made a great gif!

Madonna took note of the many discussions about her toned body. Her reps denied she had any work done. Madonna is known to work out intensely in the gym.

She posted a photo gallery of her VMAs appearance, along with the caption: "And they said I wouldn't last..... #vmas2021."

In 2019 she also denied having surgery.

One of her trainers, Craig Smith told Daily Mail Australia that Madonna works out strenuously:

"I vary the workouts every single day. She does a combination of circuit training, interval training, and resistance training. Dance is obviously a huge part of that."

She also follows a strict macrobiotic vegetarian diet to decrease her body fat.

Question: What do you think of Madonna's stunning bod?