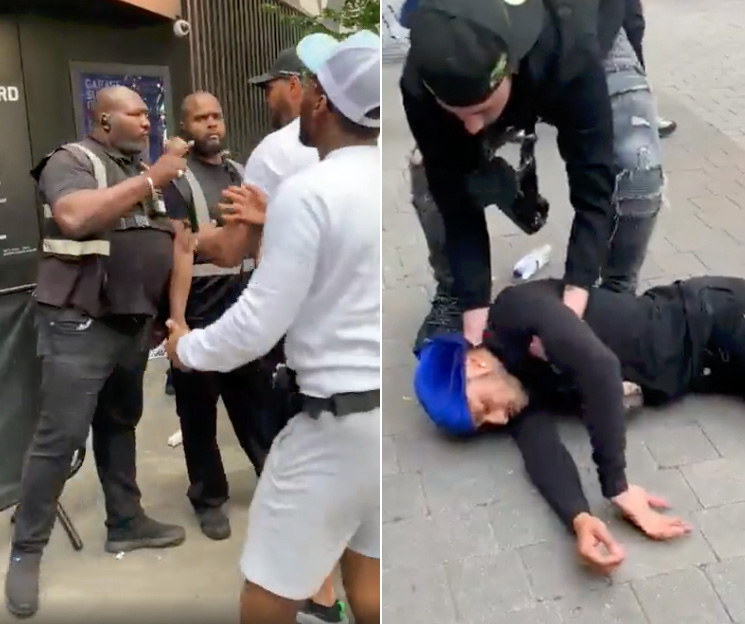 A former British heavyweight boxer, who once fought Mike Tyson, knocked out a troublemaker with one punch.

Julius Francis, a former British heavyweight boxer, is now working as a security guard at a sports complex.

Francis, 57, was working security at London's BOXPARK Wembley when the unruly man began arguing with other security staff.

The man, wearing a blue durag, argued with the security members and shoved the shortest man on the security team.

As other security officers tried to deescalate the situation, Francis worked his way around the barricades to the open sidewalk.

As the man approached him and raised his hand, Francis knocked him out cold with one punch.

Walk towards another man after showing bad intentions previously, and don’t moan when when you’re iced out of the equation.. Julius Francis dealing with the matter.. pic.twitter.com/1PimYQ522y

BOXPARK founder and CEO Roger Wade defended his employee in a message on social media. He added the hashtag #istandwithjulius.

BOXPARK founder/CEO Roger Wade has put out a statement on the Julius Francis incident: "I stand with Julius." pic.twitter.com/mXgzvGsmmG

Mike Tyson chins a member of the public on an airplane.

Julius Francis chins a member of the public outside BoxPark.

Now they’ve both shaken off the ring-rust, it’s time to make the rematch… pic.twitter.com/6iyL8EIBtd

Went a little under the radar, but last Friday Julius Francis at 57 fought ex pro Dan Cadman in a charity fight in order to raise money for Mark Potter who is sadly battling cancer. Julius Francis is one of the most respectful and nicest people in the sport . pic.twitter.com/ctU4sSxsNA

Julius Francis' boxing record on his Wikipedia page has been updated… pic.twitter.com/gSVtbYogTT