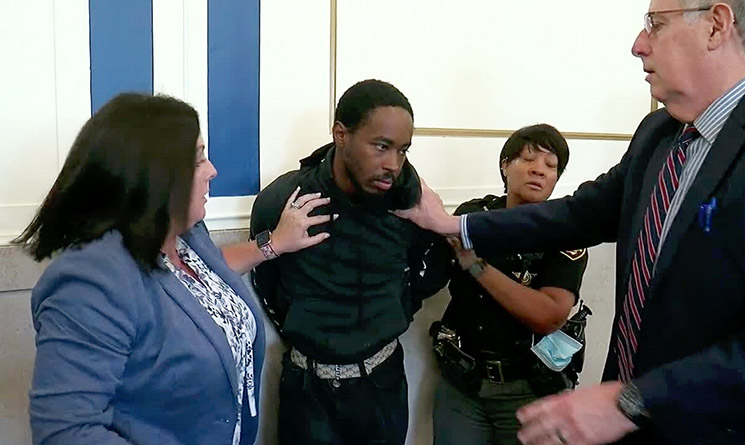 A distraught dad attacked his son's accused killer in an Ohio courtroom on Thursday morning.

Desean Brown, 22, is accused of fatally stabbing Nyteisha Lattimore before tossing her 3-year-old son, Nylo Lattimore, in the Ohio River where he drowned in December 2020.

In surveillance video footage obtained by Fox 19 News, Nylo's biological father, Tonio Hughes is seen sitting in a back row in the courtroom during a pretrial hearing on a motion filed by Brown's attorney.

Hughes is seen sneaking up behind Brown, who is handcuffed at a table, and punches him with a right hook.

Hughes continues to pummel Brown with his fists while two female deputies struggle to restrain him.

The two women eventually tackled Hughes to the floor where he apparently calmed down.

A second video shows male deputes entering the courtroom. Hughes, who is agitated again, lunges for Brown while being restrained by three large male deputies.

Brown was ushered from the courtroom for his own protection. He is being held without bail and faces the death penalty if convicted.

After the incident, Judge Megan Shanahan held Hughes in contempt of court and sentenced him to serve seven days in the county jail.

"Judge Megan Shanahan and the Hamilton Sheriff's Office would like to emphasize that this behavior will not be tolerated in the courthouse," Hamilton County Sheriff's PIO Kyla Woods said.

"Everything inside him, just the pain and everything took over," said family friend Faith Burton. "He did what I think any of us would do."

Burton said Hughes is having a difficult time getting over the death of his son.

"I've had to be on late-night calls, because he's on the edge, you know?" Burton said. "He's on the verge. Is he going to hurt himself?"

She continued: "I couldn't live without my child either, you know? So I get his emotions, I get why he acted out in court today."