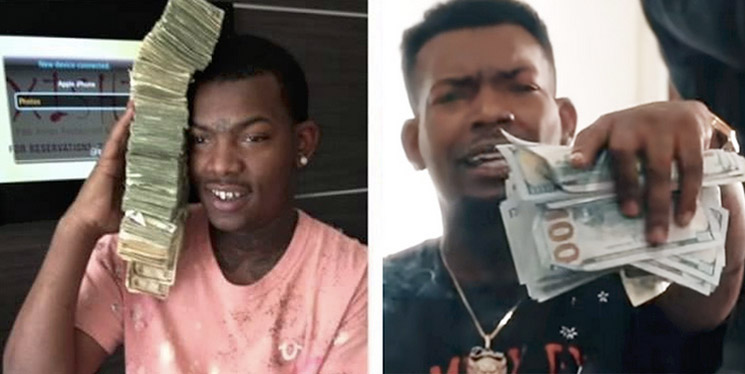 An aspiring rapper who bragged about stealing pandemic benefits has agreed to plead guilty and will serve prison time.

According to the Department of Justice, 33-year-old Fontrell Antonio Baines, aka Nuke Bizzle, has agreed to a plea deal.

Baines, who is originally from Memphis, pled guilty to illegally obtaining COVID relief funds in 2020. He is accused of stealing more than $1.2 million in unemployment benefits preloaded on 92 debit cards from the Employment Development Department (EDD).

Federal authorities indicted Baines after he appeared in a music video for "EDD" flashing stacks of cash and bragging about defrauding the federal government.

"I just got rich off of EDD/ I just woke up to 300 Gs," Baines bragged. "Unemployment so sweet/ We had 1.5 land this week." Rapper Fat Wizza added: "You gotta sell cocaine, I can just file a claim."

He allegedly used the names of identify theft victims to obtain more than 90 pre-loaded debit cards. Those cards were reportedly mailed to Beverly Hills and Koreatown addresses that were linked to Baines.

Baines and his associates withdrew $704,000 in cash using the cards.

He also allegedly admitted to being a felon in possession of a firearm with 14 rounds of ammunition.

Baines agreed to plead guilty to one count of mail fraud and one count of unlawful possession of a firearm and ammunition. He will also forfeit $56,000 in cash that was seized by federal agents.

Baines faces up to 20 years in prison for the fraud charges and 10 years for the weapons charges.